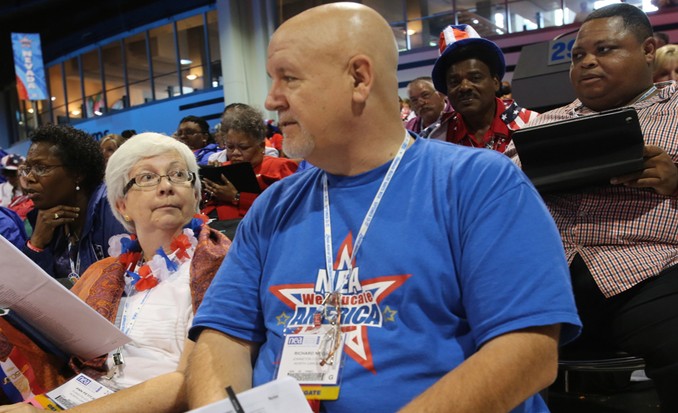 RALEIGH – Teachers are considering a statewide walkout to get lawmakers’ attention.

They are fed up with education funding cuts, lay-offs, lack of raises, and even more importantly, what they see as a lack of respect for their profession.

There is no denying teachers have a tough job and the importance of having a good teacher in every classroom.

But feeling underpaid and under-appreciated, teachers across the state are considering a walkout.

“I think it’s a shame that it’s going to possibly take that to get noticed,” said James Gardiner, a Wake County father.

It tells teachers, “The powers that be will continue to exploit you without a bold statement. This is a strike; organized completely through social media.”

Many of the teachers on the site turned down our interview request, saying they feared the repercussions of speaking out publicly.

But they posted comments like, “Yes, fellow teachers….it’s time for us to step it up a notch….,” and, “They are going to keep walking all over us unless we all stand together!”

“I think they should make a lot more money than they currently make, so I would support them 100 percent,” Gardiner said.

But teachers’ employment contracts prohibit them from striking and not everyone supports the idea.

“We’re in a right to work state, and we’re in a non-union state, so here in North Carolina, if we do strike, there’s a possibility of losing jobs. So I can see a lot of people not being interested in participating just because they’re putting their job on the line,” said Wake County teacher Gretchen Phillips.

“I certainly understand people who do want to participate in some way to get everyone’s attention about what’s going on in our public schools because there are some definite concerns,” she said. “I don’t plan in participating in it because I can’t see leaving my kids without a teacher for the day.”

“I don’t think they should go on strike, not even just for that one day,” said Wake County mother Trenessia Hines. “But we do need to find a way to get lawmakers’ attention.”

Teachers are holding an organizational meeting this week to discuss their next steps and if they’ll move forward with the walkout plans.

Some say instead of teachers walking out of the classrooms, they would call in sick for the day, in which case there may not be enough substitute teachers to cover the vacancies.