Above Photo: Decolonize This Place gathered a coalition of over 15 grassroots organisations to attend this year’s Anti-Columbus Day movement, including calls for the abolition of prisons, the liberation of Palestine, and the end of capitalism. Zachary Small

After being blocked from entering the American Museum of Natural History, decolonisation demonstrators took to the streets, ending at the Metropolitan Museum’s steps

Rename Columbus Day. Remove the statue of Teddy Roosevelt. Respect the ancestors. Decolonize This Place has spent the last four years demanding the same three things from the American Museum of Natural History (AMNH)—with little progress. This year, blocked from gathering inside the institution, the activist group decided to take their fourth Anti-Columbus Day tour on the road.

Nearly 500 demonstrators—many of them artists, students, and teachers—gathered on the museum steps on Monday afternoon, but found the entrances blocked and the museum unexpectedly closed, hours ahead of schedule. When asked if the early closure was because of Decolonize This Place, visitor services staff said they were “not at liberty to say”, and press representatives for the museum did not respond to The Art Newspaper’s request for comment at the time of publication.

So the participants of the planned tour instead marched through uptown Manhattan’s typically quiet streets to the sound of drums and calls for the abolition of prisons, the liberation of Palestine, and the end of capitalism. Many wore bandanas to conceal their identities; others sported Indigenous dress to express pride in their ancestry. An estimated 50 police officers followed the activists, diverting traffic away from the them.

The high police presence did not bother Anne Tirozzi, who attends the protest tour every year. “The general population needs to think more about what the beauty of museums is built on,” the New Yorker said. Even though she is protesting the museum, she is also a member who regularly brings her children and grandchildren to visit. “As a member, I’m paying money for this museum to remain open, and I will not pay anymore unless they start honouring our demands.”

Last year, around 1,000 people attended the Anti-Columbus Day tour, which took place inside the museum’s galleries. Activists staged interventions arguing that the institution perpetuates outdated ethnographic curatorial practices by collecting and displaying African and Indigenous artefacts and remains in a way that denigrates non-white and non-Western peoples. In March, AMNH attempted to address its critics by updating a historic diorama of Dutch settlers and Lenape people to include ten large labels summarising various issues with the display. The change did not impress activists.

“After three years of protest, it seemed like a token gesture,” says Amin Hussein, an organiser with Decolonize This Place. “The museum annotated a diorama while it’s still sitting on the skulls of indigenous people.”

On the heels of their successful push for the removal of Warren Kanders from the Whitney Museum’s board of trustees, Decolonize This Place gathered a coalition of over 15 grassroots organisations to attend this year’s Anti-Columbus Day movement. They included protesters calling for the abolition of prisons, and on Friday, Decolonize This Place will join the New Sanctuary Coalition and Freedom to Thrive in a protest outside the Museum of Modern Art’s opening party to demand that the institution divest its pension fund from private prisons. 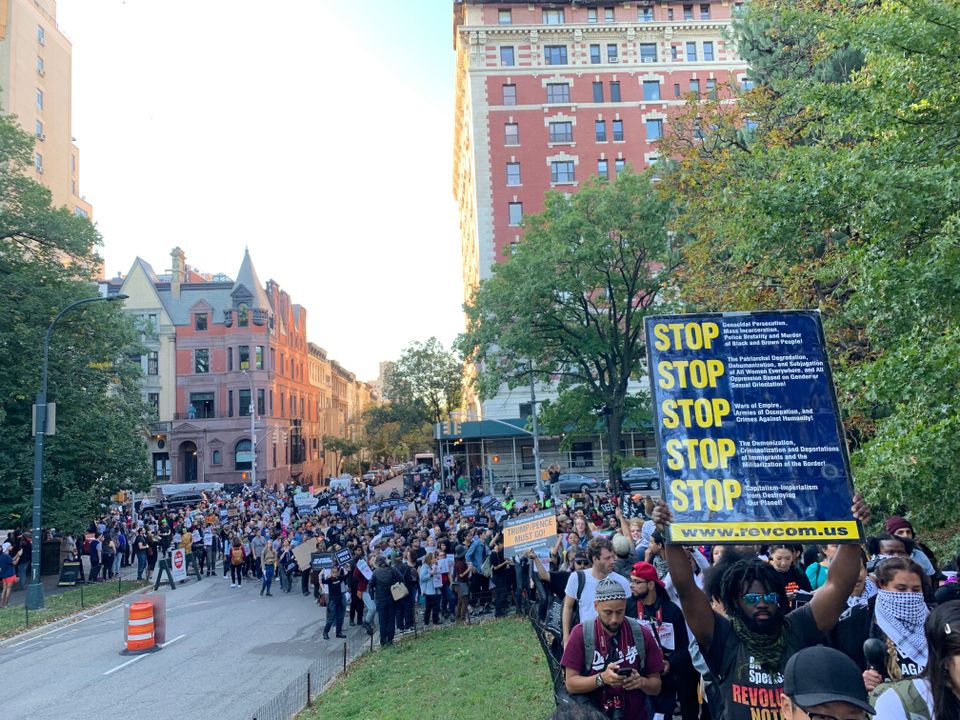 After leaving the natural history museum, demonstrators weaved through Central Park, which was once the site of Seneca Village, the city’s first settlement of free African America landowners before it was razed in 1857 for the park’s reconstruction. And for centuries before that, the land belonged to the indigenous Lenape people who occupied much of Manhattan. The park’s history was used as an example of the legacy of gentrification and rezoning imposed on the city’s Black residents. Other stops on the tour included the Egyptian obelisk popularly known as Cleopatra’s Needle, where organisers discussed settler colonialism and looting. As the quick lecture started, activists held a protest banner aloft: “They want the art. Not the people.” 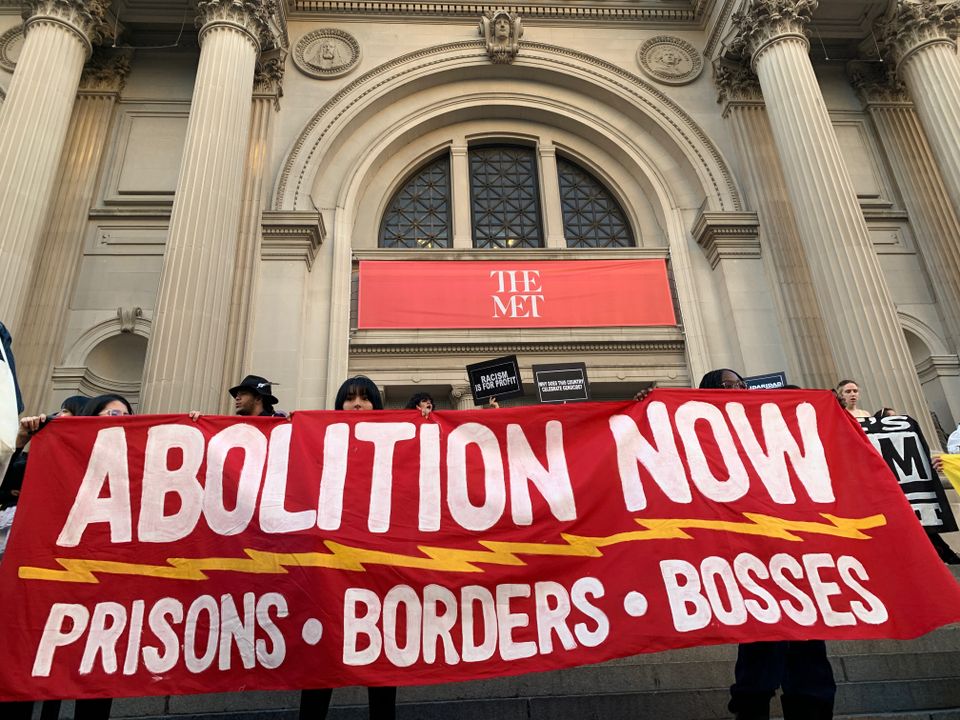 The protesters final destination was the front steps of the Metropolitan Museum of Art Photo: Zachary Small

The protesters final destination was the Metropolitan Museum of Art, where they took their place on the front steps. Two elderly onlookers were somewhat confused by the procession and found themselves at odds with each other. “I wish them all the best, and it’s wonderful that they are exercising their right to free speech,” the woman said. “I wish they’d get the fuck off Manhattan,” her husband retorted. A Black man passing by the protests with his children had a different angle. “This is how they show the world that they’re important,” he told the kids, explaining what it means to hold demonstrations in the US.

Another child spoke during the protest about the more positive aspects of the day. With four other young people, she was part of a musical performance commemorating violence in Ecuador between Indigenous protesters and the state. She was thinking about her ancestors, she told the audience: “It’s not about how beautiful the music may sound, but the legacy they left for us.”

The Anti-Columbus Day tour finished with a stinging critique of the Met and other encyclopaedic institutions that commission contemporary artists of colour to decorate their façades while exhibiting the remains of their ancestors inside. “Capitalism looks better when the faces look like us,” the speaker said, criticising Wangechi Mutu for creating sculptures for the Met’s façade. “Skinfolk are not kinfolk.”