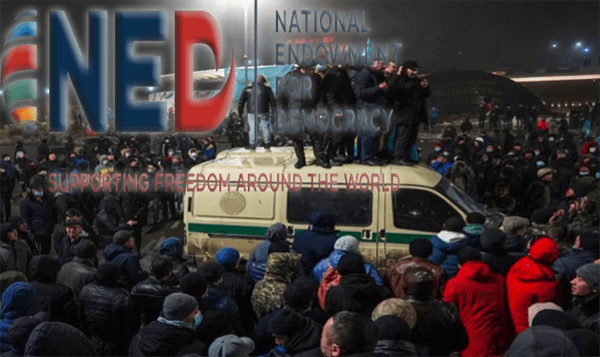 Above Photo: Protesters climb on top of a van in Almaty on January 6. Nbcnews.com; collage by staff.

Media Has Covered Crisis In Kazakhstan In Biased Way.

On January 2nd, protests erupted in the city of Zhanaozen in western Kazakhstan that have since spread across the country. Over 160 people have been killed, including at least 18 police officers, with hundreds more wounded.

The New York Times and other mainstream media outlets depicted the violence as a result of the doubling of fuel prices and unhappiness with political authoritarianism and corruption.

Kazakhstan’s president Kassym-Jomart Tokayev, has been widely condemned for carrying out large-scale human rights abuses, with Russian backing. Secretary of State Antony Blinken referred to Russia as an occupying power.

Russia has indeed sent troops into Kazakhstan in support of Tokayev. On January 5th, Tokayev invoked article four of the Collective Security Treaty Organization (CSTO), a Russia-led alliance of former Soviet states that includes Belarus, Tajikistan, Armenia, and Kyrgyzstan, which agreed to provide Kazakhstan with military assistance and defense.

In most media coverage, including even in alternative media, Tokyaev is depicted as the bad guy, with Russian President Vladimir Putin. However, Tokayev’s statement about criminals and murderers leading the protests is actually true.

The Canadian Broadcasting Corporation (CBC) reported that two police officers in Almaty were found beheaded and that government buildings were stormed and set ablaze.

RT News reported that protesters were driving away military vehicles, disarming soldiers, burning cars and had set on fire the mayor’s office in Almaty, the country’s largest city.

Lest one think RT News is biased since it is pro-Russian, The *New York Times* also featured a photograph of a burning police car on January 7.[1]

Pepe Escobar wrote in Strategic Culture about the protesters provoking “total anarchy, robbery, looting, hundreds of vehicles destroyed, attacks with assault rifles, ATMs and even the Duty Free at Almaty airport [being] completely plundered.” This assessment dovetailed with that of Galym Ageleulov, a human rights activist in Almaty who participated in the protests. He described the crowd as “an unruly mob of…thugs…clearly organized by crime group marauders.”

The media almost universally failed to report that political organizations in Kazakhstan in 2020 received $3.8 million from George Soros’ Open Society Foundation, which promotes regime change against pro-Russian leaders in Eastern Europe and Central Asia under the guise of advancing democracy and human rights, and more than $1.2 million from the National Endowment for Democracy (NED). (data for 2021 is not yet publicly available)

The NED was founded in the 1980s by the Reagan administration to carry out functions previously adopted by the Central Intelligence Agency (CIA).[2] It has been involved in supporting “color revolutions,” or regime-change operations, throughout Eastern Europe and Central Asia directed against pro-Russian leaders like Eduard Shevardnadze of Georgia in the 2003 “Rose Revolution” and Viktor Yanukovych who was ousted in Ukraine in February 2014.

In 2018-2019, the NED spent almost three million dollars in Belarus, which was targeted in a color revolution directed against Socialist Alexander Lukashenko, a close Russian ally who sustained considerable popular support because of the strength of his country’s social programs.

Much of the NED funding was directed toward training youth activists in political organizing, strengthening NGOs and financing independent anti-Lukashenko media, which played a pivotal role in trying to stir up opposition and protests against him. The NED has also set out to publicize human rights abuses as a means of undermining Lukashenko’s legitimacy.

The same approach has been deployed in Kazakhstan. In 2020, the NED budgeted $61,450 for defending human rights, $69,920 for what it calls promoting and defending civil society, and $300,550 for independent news and commentary.

All of these initiatives sound positive, but their primary intention is to stir anti-regime opposition and propaganda.

When violent protests begin to escalate, the opposition media kick into high gear, depicting the president as a tyrant committing human rights crimes, and international media—including the alternative media—follow suit.

Regime change usually follows, though in the case of Kazakhstan, Russian and CSTO support, combined with the lack of organization and vision of the protest movement, makes those prospects here unlikely.

The leader of the Kazakh protest movement, Mukhtar Ablyazov, is a former energy minister and wealthy banker, who fled from Kazakhstan to Britain in 2009 after being charged with corruption and embezzling as much as $6 billion when he was head of Kazakhstan’s largest bank.

Owning a network of over 800 fake companies, many of them off-shore, Ablyazov was accused of murdering his business rival, Yerzhan Tatishev, on a hunting trip. A colleague told a court in Almaty that Ablyazov, who heads the right-wing Democratic Choice party of Kazakhstan, “proposed…the physical elimination of Yerzhan. This would happen during a hunting trip and look like an accidental death. And so it happened.”

Dubbed by the British press as the “world’s richest fraudster,” Ablyazov lived sumptuously in a nine-bedroom mansion in London’s “Billionaire’s Row” and a 100-acre estate in Windsor Great Park, while renting a 15,000 square foot mansion on Bishop’s Avenue in London. He owned three private planes and more than one thousand apartments, and 106 cars.

In 2012, a British judge ordered him imprisoned for lying in court about his financial assets, which prompted him to seek asylum in France. Lord Justice Maurice Kay observed that: “It is difficult to imagine a party to commercial litigation who has acted with more cynicism, opportunism and deviousness towards court orders than Mr Ablyazov.”

Ablyazov has set up headquarters for the new color revolution in Kyiv, home of a U.S.-backed government infiltrated by neo-fascists that is priming for war with Russia, and has called for Western military intervention.

His lawyer, Stephan Roh, was the attorney for Joseph Mifsud, the notorious Maltese-British agent who tried to entrap Trump campaign worker George Papadopoulos in 2016, with help from Italian Democratic Party networks and the Italian government under Matteo Renzi.

Besides failing to discuss Ablyazov’s background, almost all media coverage of Kazakhstan has failed to probe the important geopolitical stakes underlying the protests.

Russia is depicted as the bad guy because it is supposedly helping a ghastly regime. But as bad as Tokayev may be, the alternative appears to be worse.

The media further ignores the fact that Putin and Russia are obligated to act under the CSTO to defend Kazakhstan and that the U.S. has been supporting the “color revolution in Kazakhstan as part of a renewed Cold War offensive. Its goal is to pry a key Russian strategic ally into the U.S. and Western political orbit, where it could be admitted into the North Atlantic Treaty Organization (NATO).

Russia has strong interest in Kazakhstan, including a launch site for space missions that it rents, a major missile testing site where a next generation missile defense system is being developed, and a reliance on Kazakh gas as a backstop for insufficient Russian production.

Kazakhstan is also one of the world’s leading uranium producers and an important oil supplier to China, which has emerged as a key strategic ally of Moscow.

The color revolution as of this writing appears to have failed. The reason is because Kazakhstan has benefited greatly from the Eurasian Economic Union which has integrated its economy with Russia and Belarus.

As a huge potential hub for accessing Central Asia, Kazakhstan under Tokayev’s leadership is also poised to receive considerable support under China’s One Belt-One Road initiative, which will likely result in a huge buildup of Kazakhstan’s railway and infrastructure, and tremendous economic benefit.

The U.S., it appears, would prefer to go back to the days of Nursultan Nazarbayev, who ruled Kazakhstan from 1990 until 2019. His mafia-style tactics were apparent when the decapitated carcass of a dog was left outside the office of a newspaper that reported he had stashed more than a billion dollars in state oil money in Swiss bank accounts, with a warning that “there won’t be a next time.”

The money had come from the sale of a 20% stake in the Tengiz oil fields to Chevron, and from $78 million in bribes given by an American oil industry consultant, James H. Giffen, the de facto U.S. ambassador who also worked for Nazarbayev and helped secure Chevron’s concession.

Today, the Great Game continues, but the world is changing, and China and Russia are becoming more powerful.