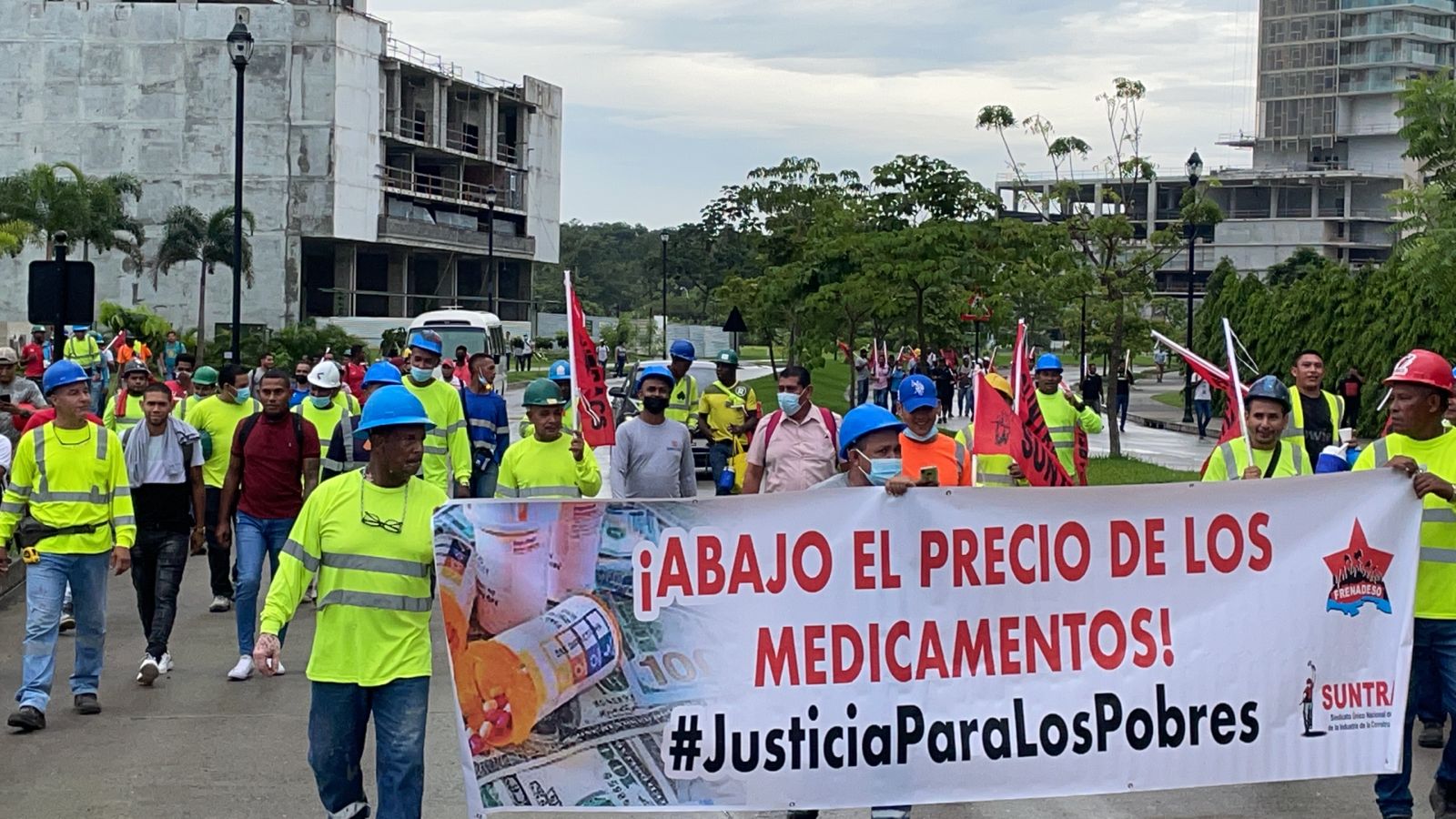 Above Photo: Since July 1, tens of thousands of Panamanians have been mobilizing across the country protesting the high cost of living and demanding support from the national government to face the growing economic and social crisis. SUNTRACS / Twitter.

The protest actions against the increase in cost of living have continued for three weeks as the government has failed to give any concrete solutions.

After more than two weeks of mobilizations and strikes and several attempts by the national government to fragment the movement, the people of Panama continue their struggle to demand immediate solutions to the cost of living crisis. On July 19, the People United for Life Alliance announced that it would partake in dialogues mediated by the Catholic Church.

The organizations part of the Alliance which drafted the list of 32 demands for the national government and organized the series of national mobilizations that began on July 1, have in the meanwhile continued their nationwide protests. On July 18 and 19, thousands mobilized in cities and towns across Panama, maintaining road blockades and organizing pickets outside public institutions.

The announcement of a unitary dialogue mediated by the Catholic Church comes after a series of attempts by the government of President Laurentino Cortizo to create dialogue processes with select groups, which movements read as attempts to fragment the Alliance and people’s unity. It also comes after several incidents of police repression against protesters. The repression was vehemently condemned by the Alliance which affirmed that negotiations cannot take place amid repression of the people. The groups have vowed to remain in the streets until a satisfactory response to their demands is received.

On Sunday afternoon, government representatives including Vice President and Minister of the Presidency, José Gabriel Carrizo and the Governor of Veraguas Manuel Castillo Melamed had met with representatives of the National Alliance for the Rights of the Organized People (ANADEPO), one of the groupings that has participated in mobilizations over the past several weeks. In this meeting, an agreement was reached that the government would reduce the price of diesel and petrol from USD 3.95 to USD 3.25 per gallon, and ANADEPO would lift the blockades of main highways and roads. The document, however, also stated the price of fuel would be subject to variation in accordance with the change in the price in the international oil market.

He said that those associated with the People United for Life Alliance would continue the protests, stressing that “the government must initiate a serious dialogue with the representatives of all the organizations that are carrying out the struggle and are still in the streets.” He added that “the people must radicalize their actions and stop this farce once and for all, pointing out that “the people are not in the streets only because of the price of fuel, but also because of (the price of) medicines, electricity, food, and to change this model of oppression that exploits the Panamanian people, this neoliberal economic model.”

Meanwhile, Abrego stated that ASOPROF also doesn’t recognize the agreement because “they were not discussed with the grassroots movements, with all the organizations that have fought hard throughout the national geography, nor with the people much less with the communities,” and also because they “did not contemplate the demand to allocate 6% of the GDP for education, nor stated how the general state budget for 2023 would look like.” He emphasized that “it is important to take part in all the actions of struggle planned for July 18,” adding that “without struggles, there are no victories.”

On the evening of July 17, thousands of citizens participated in cacerolazos called by the People United for Life Alliance, banging pots and pans, and blowing car horns across the country. In Santiago de Veraguas, under the banner of “people do not eat, nor heal their illnesses with fuel,” hundreds of people gathered on the Inter-American highway, intensifying its blockade, and danced in defense of their demands and right to a dignified life.

Justice For The Poor

Since July 1, tens of thousands of workers, teachers, students, doctors, and members of social movements and Indigenous organizations have been mobilizing across Panama protesting the high cost of living and lack of support from the conservative government. The People United for Life Alliance has presented before the government a list of 32 demands that address the growing economic and social crisis in the country.

The demands include freezing the price of fuel and basic commodities, a general increase in salaries and pensions, freezing the price of medicine and resolving the lack of supply, greater budget for public education and healthcare sectors, better working conditions in the education and health sectors, repairing of schools, hospitals, roads, and other public infrastructure, measures to combat corruption, rejecting the four bilateral US-Panama military bases, policies to support the Indigenous communities and ensure the respect of their autonomy, withdrawal of the austerity measures such as 10% reduction of the state workforce and a voluntary retirement program for public sector employees, among others.

The Alliance hopes these demands will be taken seriously in the negotiations with the government representatives.