A rally staged by a coalition of neo-Nazi and white supremacist groups in Tennessee on Saturday met counterprotests and a large police presence.

The Nationalist Front, the coalition, held Saturday’s protest, which included the participation of the neo-fascist Traditionalist Worker Party (TWP), the National Socialist Movement (NSM), the neo-Confederate League of the South and other white supremacist groups.

At the rally in Shelbyville, the white supremacist demonstrators chanted “Jews will not replace us”, a slogan that has become commonplace at far-right events in the US.

A second rally slated to be held in nearby Murfreesboro was reportedly cancelled by organisers. In a Twitter post, the League of the South’s Hunter Wallace said the event was called off because he had “intel” that it was a “lawsuit trap”.

In response, hundreds of anti-fascists (Antifa) and othercounterdemonstrators from across the state and elsewhere in the US converged on the Tennessee towns. 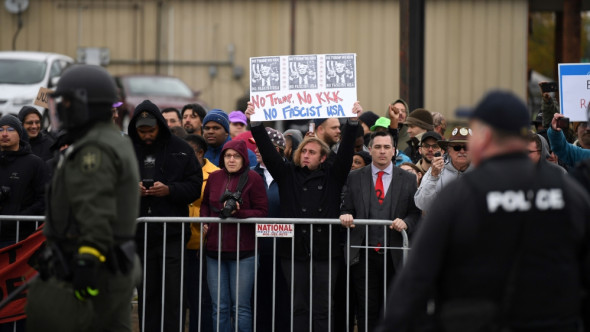 Counterprotesters line the street across from a White Lives Matter rally in Shelbyville, Tennessee [Bryan Woolston/Reuters]

The Nationalist Front and its allies chose the central Tennessee towns to protest refugee resettlement, the opioid crisis gripping the country and a mass shooting allegedly carried out by a Sudanese man at a church in that state last month.

One on the white supremacist side was just arrested in #Shelbyville pic.twitter.com/qEfpxtXdBU

“This isn’t the first time that extreme outside groups have seen Tennessee’s growing multiculturalism as an opportunity to sow fear and build support for their far-right movements by scapegoating refugees,” Stephanie Teatro, co-executive director of Tennessee Immigrant and Refugee Rights Coalition, told Al Jazeera by email.

“We are deeply disturbed by how emboldened white supremacists have become in recent months, demonstrating with greater visibility and frequency, but also how their extreme visions of Americans have been mainstreamed into state and federal policies,” Teatro said.

“Long after these outsiders leave, we’ll continue to build more connected communities that are resilient to these far-right groups.”

The white nationalists start with the “Jews will not replace us!” Counter-protesters rile them up with chants of “We. Will. Replace you!” pic.twitter.com/n784Bxh8I9

Among the scheduled speakers were TWP’s Matthew Heimbach, the League of the South’s Michael Hill, far-right podcaster Sacco Vandal and the NSM’s Jeff Schoep.

Predicting a “strong turnout” in advance of Saturday’s rallies, Schoep told Al Jazeera that the events marked the far right’s “first major street action” since a deadly rally in Charlottesville, Virginia, just over two months ago.

On August 12, hundreds of neo-Nazis and white supremacists travelled from across the country to Charlottesville to protest the city’s decision to tear down a Confederate monument. Participants clashed with community members, anti-racist activists and anti-fascists throughout the city.

By the end of the day, James Alex Fields, a 20-year-old Ohio resident, had allegedly rammed his car into an anti-racist march and killed 32-year-old activist Heather Heyer. The incident also left at least 19 people injured.

“The media is claiming we started or brought violence to Charlottesville and anyone, with even half of a brain who was actually there knows the truth the Antifa violently attacked anyone who was deemed pro-white or pro-American even,” Schoep, who refers to himself as the NSM’s commander, said by email.

He went on to allege that anti-fascists “viciously attacked us with mace, bricks, bottles, bats, chemicals, and countless urine-filled balloons and bottles” in Charlottesville.

The “Unite the Right” rally in Charlottesville and the killing of Heyer prompted a widespread public backlash against the alt-right, a loosely-knit coalition of white supremacists, white nationalists and neo-Nazis who advocate a white ethnostate.

Among those who shared Schoep’s narrative of the events in Charlottesville was right-wing US President Donald Trump, who claimed deemed anti-fascists and other counterprotesters as the “alt-left”.

Attributing blame to “both sides”, Trump said at the time that counterdemonstrators were “swinging clubs” as they “came charging at” the far-right groups.

Trump’s comments met widespread criticism from many on both sides of the political spectrum.

Earlier this month, white supremacist Richard Spencer, a leading figure in the alt-right, held a speech at the University of Florida in Gainesville.

Three of Spencer’s supporters who travelled from Texas to Gainesville were arrested and charged with attempted homicide after one of them fired a gun in the direction of anti-racist protesters. No one was injured in that incident.

Mark Bray, author of Antifa: The Anti-Fascist Handbook, argued that “it certainly seems” that the Trump administration and mainstream political establishment have focused their efforts on cracking down on anti-fascists and anti-racist activists.

Bray alluded to the Department of Homeland Security’s recent decision to cut funds for organisations that combat right-wing violence and hundreds of anti-fascists facing felony charges for their role in protests during Trump’s January 20 inauguration.

Anti-fascist, anti-racist organising and broader societal pushback have done a pretty good job of depriving [the far right] of the kinds of opportunities for expanding beyond their base.

“If you look at the fact that the Trump administration pulled back resources to investigate white supremacist violence, if you look at its dog-whistling and kind of more overt sympathies to the far right, if you look at charges from [January 20] and elsewhere … the establishment is generally more concerned about the left than the right,” he told Al Jazeera.

Against this backdrop, Bray explained, anti-fascist activism has played a crucial role in confronting the swell of white supremacist events since Trump took office.

“Anti-fascist, anti-racist organising and broader societal pushback have done a pretty good job of depriving [the far right] of the kinds of opportunities for expanding beyond their base,” he said.

The far-right group Anticom recently cancelled a December 28 torchlit rally dubbed “March Against Communism” in Charlotte, North Carolina. The alt-right’s Spencer was slated to speak at the event, according to The Charlotte Observer.