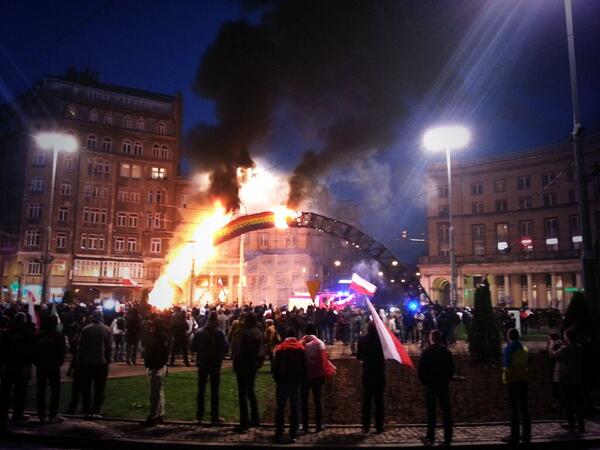 Neo-nazi fascists are active in a place where nazis tortured and killed about 6 million Polish citizens between 1939 and 1945. A nazi march that attacked the Przychodnia squat in Poland today was disbanded hours ago, and the march has been deemed illegal by the police. Also, the Syrena squat was attacked with machetes, bottles and blunt weapons. During the attack, there were 8 children aged 3-14 in the squat. Four police officers were sent to a hospital after heavy clashes. Fascists used Molotovs against the squat and have set fire to cars nearby. Water cannons were used against the nazis, and police have called for people not to come out of their houses if they’re in the centre of city, since they’re afraid there might be more serious clashes.

In another act of hate, fascists have burned a monument referred to as “the rainbow.” They have also reportedly attacked Russian embassy workers.

Statement issued by Przychodnia SkłotAround 3:45 pm the participants of the independence march attacked Przychodnia social centre. It is owing only to our own determination and calmness that we managed to resist the nationalist aggression. A few people were injured but nobody’s life is in danger.Neo-fascists were prepared to comment on the matter in the media and immediately informed that it was the people from the squat who attacked their march from the roof throwing stones in their direction. It is obvious that it was impossible because the end of Skorupki street, where the building is located, is around 200 meters from Marszałkowska street, along which nationalists were marching.As we can see on a few videos, a paramilitary called The Guard of The Independence March, whose role was to protect the march, made it possible to pass for the group of a few hundred people, armed and ready to fight. The participants of The Independence March, flares, bottles and stones in their hands, rushed into Przychodnia.The nationalists set one car on fire and devastated another one, damaged the building trying get inside, but fortunately we managed to resist the attack. It was possible only because we had kept watch on the roof (we had been threatened for some time already) and reacted fast to put out flares which fell inside the building.We want to stress that despite the fact that the police squads were stationed a few hundred meters from us, it took them 20 minutes to intervene. If we had listened to the police and ignnored the danger, the squat would have been burnt down.The Goebbelsian propaganda of the National Movement is trying to make it appear like an act of hooliganism – despite the fact that it was the officially appointed guard of the march who let the attackers leave the march and helped them evacuate afterwards. At the moment we are getting prepared for another raid, stay alert!With antifascist salutations,Przychodnia Collective.

Statement issued by Syrena Collective (concerning the events of 11 November 2013)Today, on Independence Day, the police maintained constant patrol over the streets Skorupki and Wilcza where the autonomous spaces Syrena and Przychodnia are located.About 3:30 PM, the nationalist March of Independence moved through the city center. The police troops standing guard near Skorupki street dispersed and disappeared.Simultaneously, a several dozen-strong group of neo-Nazi demonstrators arrived. They broke the chains at the gate and entered the site. Armed with machetes, bottles, and clubs, they proceded to attack the people inside. At the moment, Syrena’s quarters held eight children aged 3 to 14, among other persons.The greatest damage was done to Przychodnia – with cars burned and destroyed, people injured, and windowpanes knocked out. For about thirty minutes – due to the police forces’ retreating – we were forced to defend ourselves on our own. Had it not been for our firm response, the scene would have ended in tragedy: the neo-Nazi attackers were ready to kill.This is what your ‘patriotism’ looks like today. Every single person taking part in the Independence March shares the responsibility for the attacks on homes of evicted families, of the elderly, of people with disabilities and all those who cannot afford neither their rent nor a 30-year bank loan.This is reality in Warsaw as it was today – those in power evict, the fascists strike.We will endure both.