Fort Collins, CO – On Friday night, Turning Point USA (TPUSA), a right-wing xenophobic student group, held a “Smashing Socialism” speaking event featuring its founder Charlie Kirk, at Colorado State University (CSU). A call to protest the event came from the Northern Colorado Antifa Collective, who has stated they oppose TPUSA because the organization provides “sanctuary” to “dangerously prejudicial sentiments.” The evening ended with police dispersal orders as an amassed crowd of antifascists confronted a small group of neo-Nazis who arrived at the end of the event, driving them off campus.

TPUSA is primarily based on its chapters at college campuses across the country, and maintains a watch list of leftist professors they would like to see fired from universities. The group has long been plagued with accusations of racism – last year, texts between TPUSA employees surfaced which showed one of them saying “i hate black people. Like fuck them all . . . I hate blacks. End of story.” A Turning Point chapter at CU Boulder was responsible for booking alt-right provocateur and pedophilia advocate Milo Yiannopoulos in January 2017; TPUSA’s March 2017 regional conference in Denver featured several B-list alt-right personalities and was also met with protests.

In the days leading up to TPUSA leader Charlie Kirk’s speech on Friday night, fliers from the national socialist Traditionalist Worker Party (TWP) were found on campus. Various news outlets began to report that TWP members were planning to attend the February 2 event. While CSU president Tony Frank condemned the TWP fliers, TPUSA chapter president Isabel Brown, in statements to the Coloradoan, did not. Brown later backpedaled on her original support by stating that TPUSA condemns white nationalism; TPUSA head Charlie Kirk made statements to this effect during his Friday night speech as well.

The German anti-racist group HateXchange created a fundraising campaign to “adopt a Nazi enabler” and donate on behalf of the Traditionalist Worker Party members planning to attend. Donations from the campaign go to CSU Student Diversity Programs and to Life After Hate, an organization that works to help people leave hate groups.

Hours before the event, local police and EMTs were seen staging with vehicles and shields.

Charlie Kirk’s speech was held in the grand ballroom of the Lory Student Center. The admission line snaked through the upper level of the center while protesters gathered in the plaza below. Attendees wearing Black Lives Matter t-shirts were among those in line for the event, and a TPUSA representative was overheard telling CSU staff that they were expecting disruptions from Black Lives Matter. He asked security to carefully check black students’ IDs since they weren’t allowed to turn away anyone who held tickets.

Hundreds soon filled the plaza outside to protest the event.

Fort Collins Democratic Socialists of America, who were collecting hygiene items to donate to the homeless, set up a table for “Toilet Paper USA”. 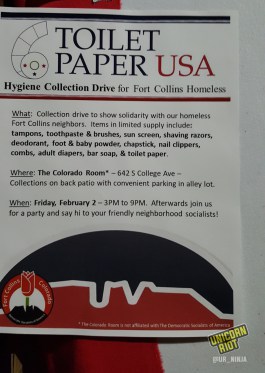 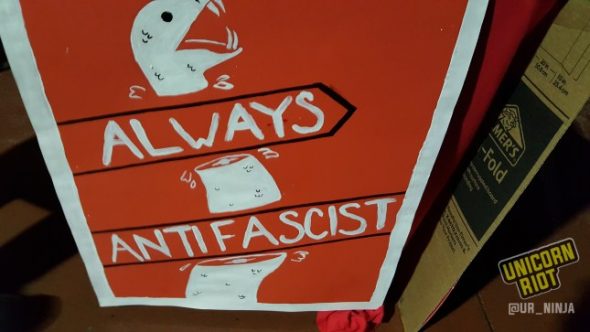 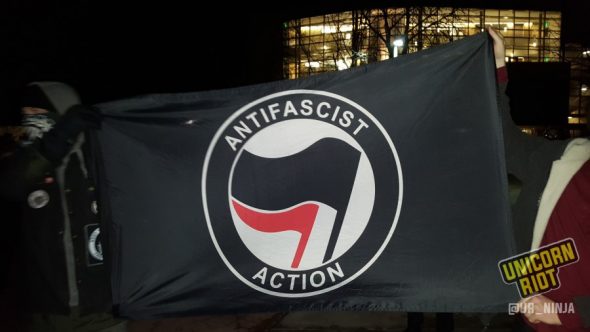 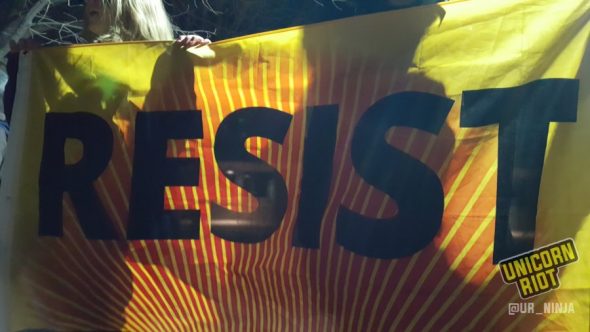 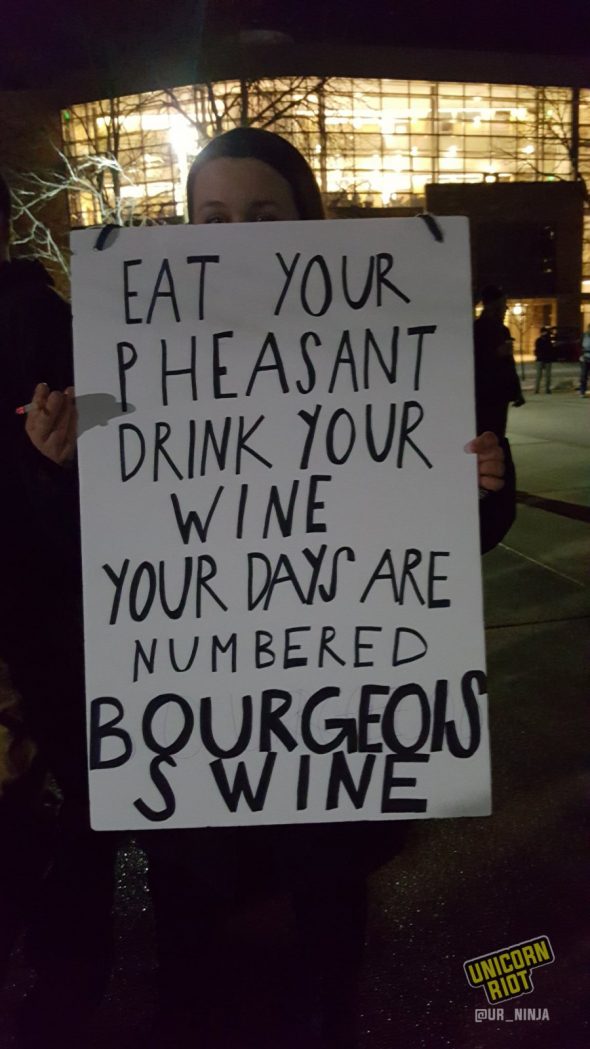 As the event ended, security funneled attendees to a side exit away from the plaza in an attempt to avoid conflict. However, CSU security was seen directing black students attending the TPUSA event to leave through the exit closest to the plaza.

As the event was letting out, a group of neo-Nazis arrived wearing masks, carrying flags, shields, and police-style tactical flashlights which they used to attempt to disorient people and blind cameras. The group made its entrance chanting the historic Nazi slogan “blood and soil!” and included two Denver-area white supremacists known to be associated with the Traditionalist Worker Party, Joshua Yeakel and Russell Frankland. Yeakel recently proclaimed himself to be a member of TWP while harassing members of a socialist organization tabling at the Denver Women’s march on Jan 20, 2018. Yeakel has also been closely associated with William Planer, a TWP regional officer currently in jail awaiting trial for felony assault charges associated with stabbings at an anti-racist rally in California in June 2016. Another individual with the neo-Nazi group, later seen on video making ‘sieg heil’ salutes to the crowd, identified himself as a member of Aryan Circle.

The small group of white supremacists quickly left as they were confronted and pushed out of the square towards the other side of the student center. The police issued a dispersal order and fired their LRAD sound cannon as the crowd continued to push the neo-Nazis away from the area, shouting “Nazi punks go home”. After both groups continued moving towards the edge of campus, the police remained in a line at the Lory Student Center. They beat their batons on their riot shields as a drone flew overhead and attack dogs barked, facing a street that was empty for as far as the eye could see.

After TPUSA attendees, anti-racist protesters and the small group of neo-nazis had all left @ColoradoStateU campus, authorities deployed armored vehicles, a helicopter, an airhorn, attack dogs, and dozens of riot cops beating on their shields in unison against…. an empty street pic.twitter.com/1L41Teulxd

While the police remained stationary, conducting a show of force on an empty street, the rolling crowd continued to confront the neo-Nazis both verbally and physically, with snowballs, rocks, sticks, and pepper spray. Shouts came from the crowd of “Get the fuck out of here”, “Kill yourself like Hitler did”, and “We replaced you, I’m a Jew, I’m replacing you”, in parody of the popular white supremacist chant “Jews will not replace us“. After a series of altercations a small team of police arrived on an ATV and separated the fighting groups. No arrests were made.

Later in the evening the neo-Nazi who identified himself as a member of Aryan Circle was seen attempting to enlist assistance from the the police. Police were heard telling the group “Let us know if you need anything.”

Members of the Traditionalist Worker Party were beaten and maced before they ended up fleeing the CSU area. This police officer was overheard telling one of the neo-nazis “let us know if you need anything.”

We first showed up to protest Turning Point USA as the organization is known to harbor many racist, xenophobic, bigoted, politically corrupt, and misogynistic persons. TPUSA has done little to nothing to condemn the ideals and practices of those members… As counter events came into existence from many different groups to protest such blatant complicity and complacency, we then found out that nationally recognized Nazis were coming to support them. Though the Nazis publicly denied plans to come, we were not surprised at all when they rounded the corner of the LSC on Friday. We were more than prepared to deal with the situation at hand, and pushing them out was relatively easy as a result.”