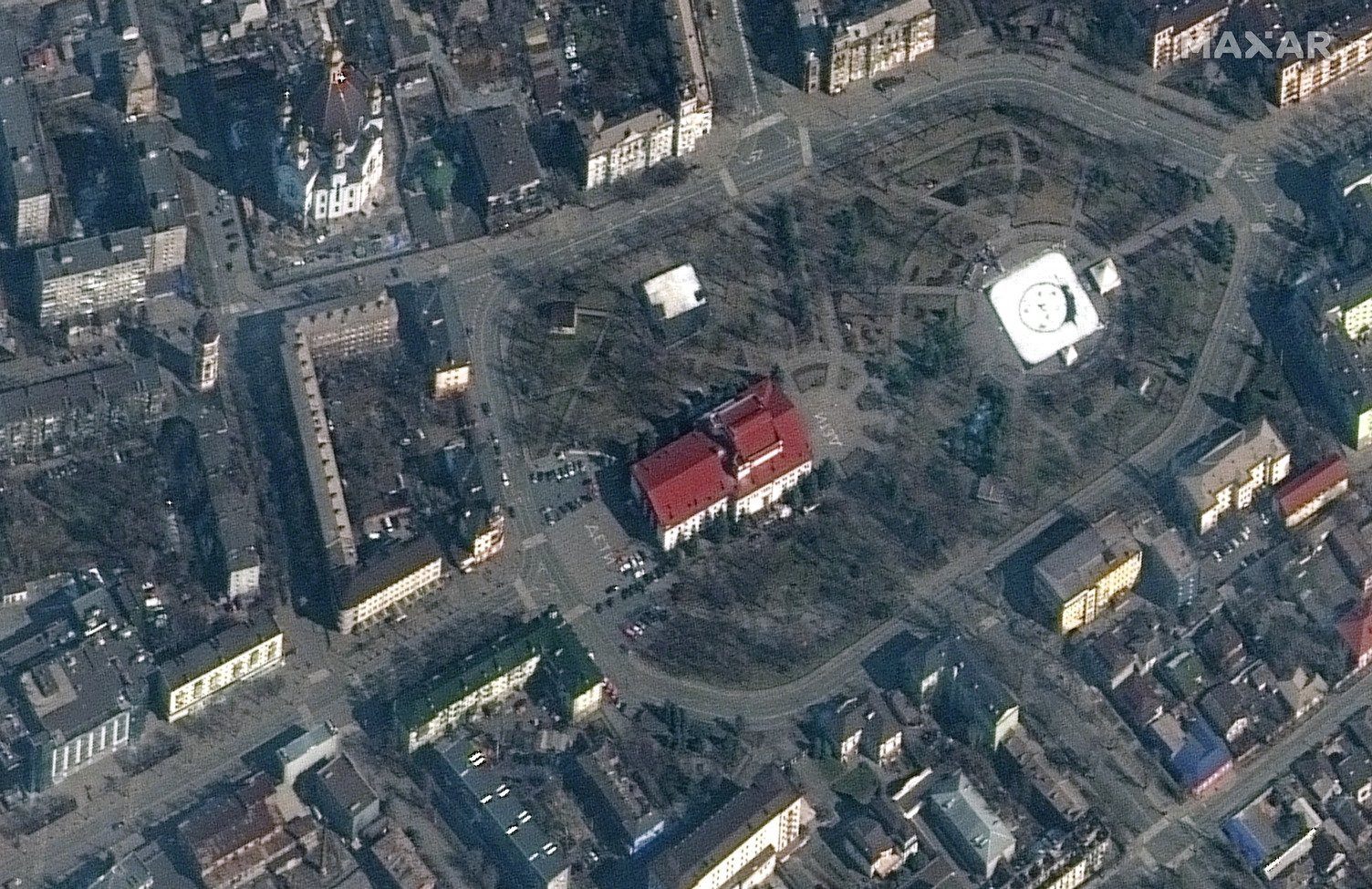 Striking satellite imagery taken on Monday of the Mariupol Drama Theatre—hit by an air strike today. 1,200 civilians were sheltering in it. The image shows that the word “children” is written in Russian in large white letters in front of & behind the theatre.
(📸: @Maxar) pic.twitter.com/JEuvRadBUK

The Ukraine claims that such an attack took place. Russia says that the Azov battalion blew up the building.

Evidence for ‘hit by an air strike today’ and for ‘1,200 civilians sheltering in it’? 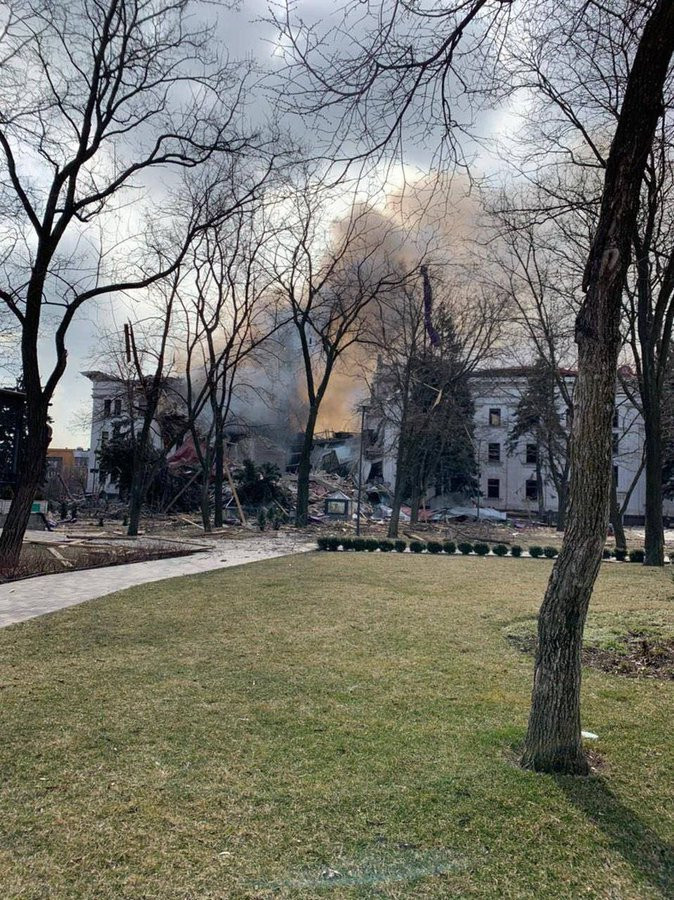 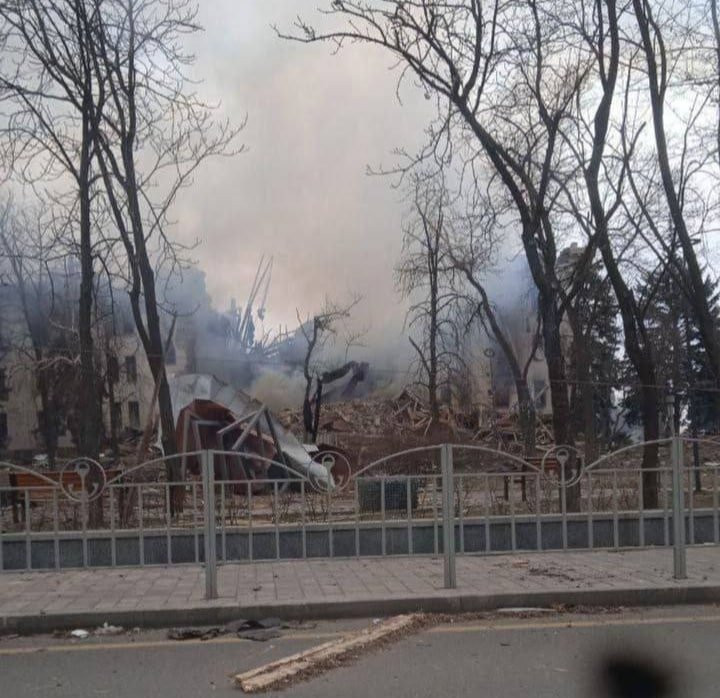 Evidence missing to support such a claim?

Evidence that possibly counters those claims? 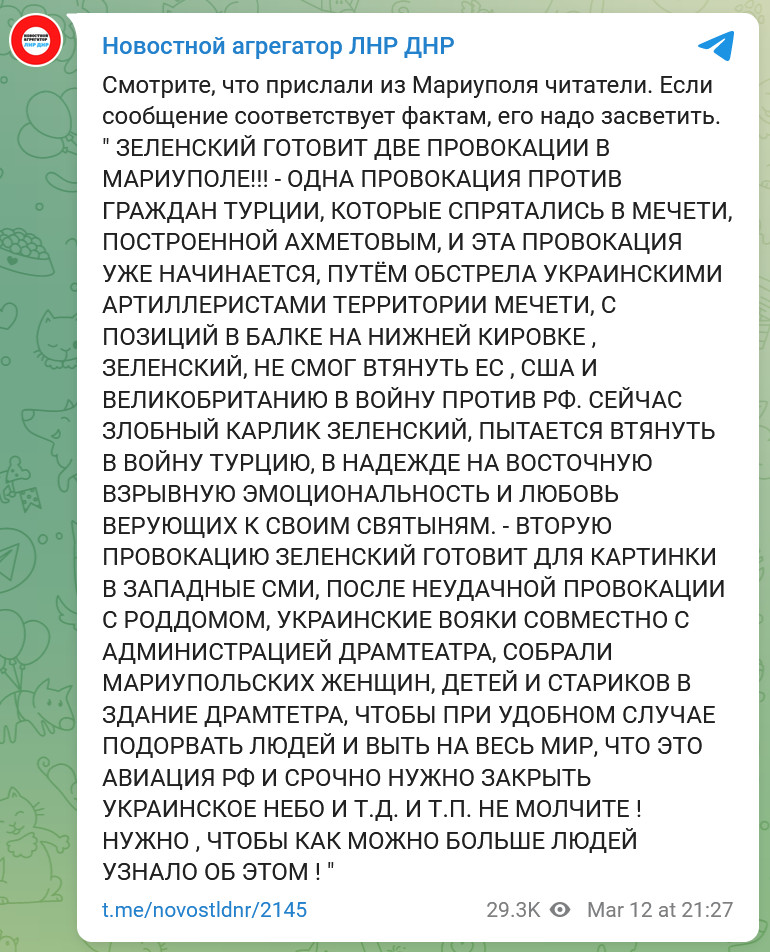 Google translation of the above:

See what readers sent from Mariupol. If the message corresponds to the facts, it should be highlighted.

Confirming the Telegram time stamp is the redistribution of the above by several people:

Information allegedly came from Mariupol locals ( reminder – they are mostly ethnic Russian) that
neo-Nazi from Azov gathered Mariupol women, children & elderly into the building of Mariupol drama theatre and are going to blow it up, blaming the victims on “Russian shelling”

This then seems to be another fake incident just like the curious maternity hospital incident a few days ago where the destruction of a 100+ rooms building resulted in allegations of just 17 wounded people none of which were documented by the immediately available photographers on the scene.

And for those who think that claims of ‘neo-Nazi from Azov are ruling Mariupol’ are just slandering “Russian” exaggeration I offer this item published yesterday by DW, the German government financed and directed news service:

The notorious Azov Battalion, also known as the Azov Regiment, posted this video earlier this week on its Telegram channel. It announced that it had destroyed three Russian armored vehicles and four infantry fighting vehicles, and killed “many infantry.” Then it released a picture of a dead man in uniform, purported to be a Russian general whom it had killed. It is difficult to verify these claims.

The city of Mariupol, which has a population of 500,000, is primarily being defended by the Azov Battalion.

Mariupol is also where the Azov Battalion, which is part of the Ukrainian National Guard and thus subordinate to the Interior Ministry, has set up its headquarters. Its fighters are well trained, but the unit is composed of nationalists and far-right radicals. Its very existence is one of the pretexts Russia has used for its war against Ukraine.

Initially, Azov was a volunteer militia that formed in the city of Berdyansk to support the Ukrainian army in its fight against pro-Russia separatists in eastern Ukraine. Some of its fighters came from the small but active far-right group Pravyi sektor (Right Sector), whose core members were from eastern Ukraine and spoke Russian. Originally, they had even advocated the unity of East Slavic peoples: Russians, Belarusians and Ukrainians. Some were soccer ultras, others were active in nationalist circles. Such associations would be described as “free comradeships,” or organized neo-Nazi groups, in Germany, Andreas Umland from the Stockholm Center for Eastern European Studies, told DW.

The Center for International Security and Cooperation (CISAC) at Stanford University has collected quite a bit of information on the Azov battalion:

The Azov Battalion is an extreme-right nationalist paramilitary organization based in Ukraine. Founded in 2014, the group promotes Ukrainian nationalism and neo-Nazism through its National Militia paramilitary organization and National Corps political wing. It is notable for its recruitment of far-right foreign fighters from the U.S. and Europe as well as its extensive transnational ties with other far-right organizations. In 2022, the group came to prominence again for fighting against Russian forces in Kyiv, Kharkiv, and Mariupol.

In 2014 Newsweek and others documented that Azov is indeed a fascist organization:

Since at least 2015 Ukrainian fascists, like members of the Azov battalion, have been trained by the CIA:

As the battle lines hardened in Donbas, a small, select group of veteran CIA paramilitaries made their first secret trips to the frontlines to meet with Ukrainian counterparts there, according to former U.S. officials.

The Nation in 2019: Neo-Nazis and the Far Right Are On the March in Ukraine:

Post-Maidan Ukraine is the world’s only nation to have a neo-Nazi formation in its armed forces. The Azov Battalion was initially formed out of the neo-Nazi gang Patriot of Ukraine. Andriy Biletsky, the gang’s leader who became Azov’s commander, once wrote that Ukraine’s mission is to

“lead the White Races of the world in a final crusade…against the Semite-led Untermenschen.”

Al Jazeera in 2022: Profile: Who are Ukraine’s far-right Azov regiment?

These forces were privately funded by oligarchs – the most known being Igor Kolomoisky, an energy magnate billionaire and then-governor of the Dnipropetrovska region.

In January 2018, Azov rolled out its street patrol unit called National Druzhyna to “restore” order in the capital, Kyiv. Instead, the unit carried out pogroms against the Roma community and attacked members of the LGBTQ community.

While the group officially denies any neo-Nazi connections, Azov’s nature has been confirmed by multiple Western outlets: The New York Times called the battalion “openly neo-Nazi,” while USA Today, The Daily Beast, The Telegraph, and Haaretz documented group members’ proclivity for swastikas, salutes, and other Nazi symbols, and individual fighters have also acknowledged being neo-Nazis.

One of the aims of the Russian special military operation in Ukraine is to de-Nazify the country. The elimination of the Azov battalion in Mariupol and similar groups elsewhere in Ukraine is certainly on their agenda.

It is no wonder then that Azov is faking incidents like at the maternity hospital and the Drama theater to gain more ‘western’ support for its side.

The U.S. is promising to deliver more weapons to the Ukraine.

These weapons will make it more difficult for Russian troops to achieve their tasks. They will have to use more artillery and bombing to suppress Ukrainian formations using those weapons. This will lead to much more damage and casualties among Ukrainian troops and civilians. It will however not effect the larger outcome of the operation.

The U.S. is in fact willing to fight Russia down to the last Ukrainian fascist.

AP has just published a funny story on the search for casualties of the ‘airstrike’. The funny thing? There ain’t any:

Rescuers searched for survivors Thursday in the ruins of a theater blown apart by a Russian airstrike in the besieged city of Mariupol, while scores of Ukrainians across the country were killed in ferocious urban attacks on a school, a hostel and other sites.

Hundreds of civilians had been taking shelter in the grand, columned theater in central Mariupol after their homes were destroyed in three weeks of fighting in the southern port city of 430,000.

More than a day after the airstrike, there were no reports of deaths. With communications disrupted across the city, there were also conflicting reports on whether anyone had emerged from the rubble.

“We hope and we think that some people who stayed in the shelter under the theater could survive,” Petro Andrushchenko, an official with the mayor’s office, told The Associated Press. He said the building had a relatively modern basement bomb shelter designed to withstand airstrikes….Other officials had said earlier that some people had gotten out. Ukraine’s ombudswoman, Ludmyla Denisova, said on the Telegram messaging app that the shelter had held up.

Meanwhile refugees who escaped from Mariupol to the Russian side tell journalists that they were held back from getting out earlier by the Ukrainian militia and that it were the Azov Nazis who blew up the theater.

Refugee from #Mariupol says militants from Azov nationalist battalion, while retreating, blew up the city drama theatre, where there were civilians, whom they used as human shield. Militants also deployed military equipment near bomb shelters and residential buildings.@mfa_russia pic.twitter.com/XF2KIZ9gZd