Neoliberal Centrists And The American Left

The rapid end to the electoral fortunes of the Anglo-American left in 2020 was engineered by radical centrists for the benefit of capital. What was banished, in addition to vibrant and informed opposition to an atrophied political class, was the prospect of Federal government programs that are both desired and needed by the American people. Even if the agents of atrophy get it together in coming weeks to toss a few crumbs to those economically displaced by the pandemic, current woes arrived decades into engineered economic decline.

Politically attuned readers will no doubt take issue with the blanket statement that the left was banished by citing electoral victories at the state and local levels. And to the extent that this is the realm that corporate-state entities like ALEC have targeted, the victories are indeed important. However, the unwillingness of the electoral gatekeepers to run open and transparent elections shifts the realm of contestation away from electoral politics. And the ascendance of identity politics supports the reactionary agenda of neoliberalism in ways apparently invisible to its adherents.

For five decades now the serial solution to periodic crises of capitalism has been to make the rich richer and life more precarious, unjust, and brutal for everyone else. The method has been through deference to functionally meaningless ‘markets.’ The gladiatorial contest for employment that fails to sustain workers in terms of pay, benefits, or participation in the human community, has left the U.S. with the highest suicide rate and shortest life expectancy in the so-called developed world. That the engineers of this travesty are put forward to solve it illustrates the totalizing and impenetrable nature of so-called democracy under capitalism. 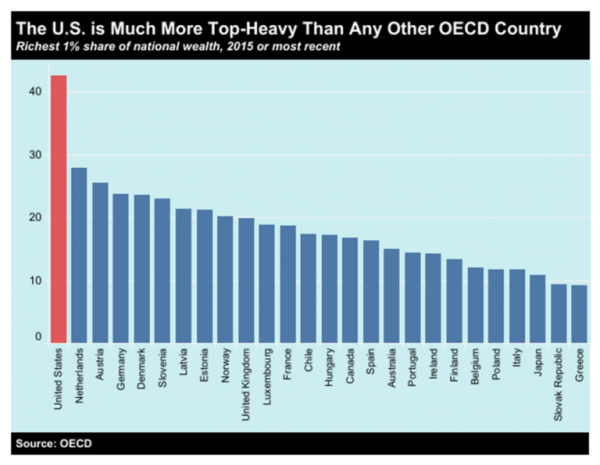 Graph: While it’s widely understood that concentrated economic power is a problem across Western economies, the U.S. is still an outlier. One percent of the U.S. population owns nearly half of the national wealth. This approximates the distribution of political power as well, with both of the political parties dropping even the pretense of democratic accountability, replaced by genuflection to the rich. It appears that U.S. political problems are the result of economic maldistribution. Source: inequality.org.

In contrast to how they are popularly portrayed, each of these areas of political dysfunction— the inability to develop and implement programs in the public interest, deference to a temporally constrained, classical liberal, conception of human being as the center of left political theory, and the assertion of a natural order that is optimally expressed through markets, define the realm of Western politics through a neoliberal prism. Through this prism, capital is the optimal instrument for solving social problems— including righting social wrongs. That these social wrongs exist five decades into neoliberal political economy suggests that this theory doesn’t match its facts.

To state the obvious: the existing healthcare system in the U.S. is the most expensive amongst rich countries with the worst health outcomes. While there is plenty of blame to go around, this system produced among the world’s worst relative and absolute outcomes in the pandemic. A Federal government job guarantee at a living wage could pay people to stay home until the pandemic has subsided and be used to rebuild the economy afterwards. And a Green New Deal premised in meeting IPCC objectives for reducing carbon emissions and supporting biodiversity could forestall or preclude environmental catastrophe.

In other words, one could lose the ‘team left’ concept to identify the major problems that we collectively face in the West, and develop solutions in terms of improving human welfare and perpetuating human life, and they would look just like the social democratic policies put forward by the American left in the Democratic primaries. The problem isn’t simply that the Anglo-American left was defeated politically. The ideas and programs necessary to maintaining social stability and the perpetuation of the species were unceremoniously tossed in the garbage in favor of a primary victory to nowhere. 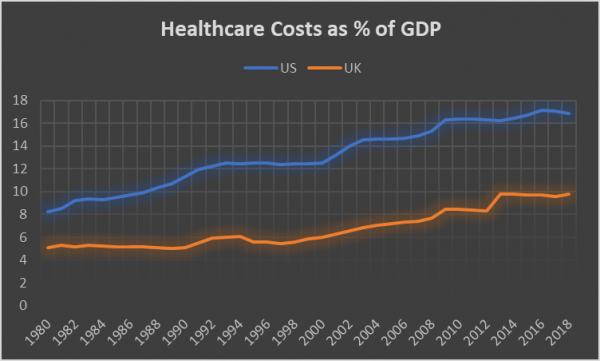 Graph: With Joe Biden claiming that the U.S. can’t afford Medicare for All, what is obvious from the graph is that the U.S. can’t afford the present system. Medical costs normalized by GDP have consistently been nearly twice as high in the U.S. as in Britain. Obamacare has been in place since 2013, seven years, with no demonstrable change in this relationship. Additionally, for twice the money we get half the benefit. U.S. healthcare outcomes are near or at the bottom amongst rich countries. Source: commonwealthfund.org.

Liberals keep asserting that the Democrats need a political program to win, when they had one and pushed one another out of the way to kill it. The second order claim is that the left political program isn’t popular when polls suggest otherwise. When Medicare for All is explained accurately, and honest explanations of how to pay for it are provided, a large majority of people support it. It is telling that Joe Biden simply lied about the cost of Medicare for All. If he really believes his program is superior, why not defend it on its merits? The establishment Democrats would rather lose elections than put forward policies that their donors object to.

Lest this remain unclear, it wasn’t the radical right that defeated this program, it was the radical center. The donor class doesn’t want these programs because it is fatter and happier than at any other time in living memory. The rich have seen their fortunes skyrocket through Federal ‘pandemic’ bailouts of their investments. The pandemic has benefited them almost as much as the Great Recession did. The radical centrists exist to undermine and destroy programs in the public interest because the rich gain power and wealth when everyone else loses it.

Whatever the personal sentiments of politicians regarding social justice, bipartisan support for capitalism renders them irrelevant. Again, it wasn’t Republicans who prevented Medicare for All, a Federal Job Guarantee and a large-scale program to fix environmental problems, from being put in front of voters in the general election. It was kente-cloth wearing, Kaepernick kneeling, Democrats who did. And they did so while claiming that they support racial and gender justice.

The political problem for corporations and the rich is how to explain ‘inequality’ in terms that don’t require the redistribution of political and economic power. This is the challenge for neoliberal Democrats as well with respect to their donor class. Equality of opportunity, the neoliberal mantra 1980 – 2007, was put forward just as the concentration of wealth went vertical. It is no longer plausible as a tool of class management. However, if racism, sexism and inequality are caused by individual propensities, then addressing these individual propensities is where the solution lies, goes the sales pitch.

This point is blown out below via the inability to reconcile neoliberal economic theories with the existence of racism and sexism. On the one hand, there are a lot of sincere people who have strong opinions regarding social justice issues. On the other, establishment politicians and corporate functionaries see social justice as an opportunity for career advancement. This isn’t intended to be as cynical as it probably reads. Through a worldview of relentless self-interest, there is no justice aside from what can be gained or lost in trade.

Assuming for the moment that racism, sexism, etc. aren’t the product of capitalist social relations, five decades of neoliberalism haven’t solved them. Why this matters conceptually is that capitalist economics don’t ‘work,’ in the sense of producing the outcomes promised, unless people are motivated by economic self-interest. Racists and sexists are therefore either motivated by economic self-interest or the base assumption of capitalism is wrong. The question then is how does rational self-interest support racism and sexism?

To approach the question from another direction, in labor markets the ability to buy underpriced labor due to racism and sexism represents an arbitrage opportunity, a no risk way to earn excess profits. If markets work as advertised, race and gender-based pay differences should be arbitraged away. The two possible interpretations of their continued existence are (1) they represent real differences in economic value or (2) markets don’t work as advertised. The first provides a ‘natural’ basis for racism and sexism. The latter means that neoliberalism has a flaw.

This leaves establishment Democrats and their IDPOL supporters solving racism by either dumping capitalism or concluding that racism and sexism are legitimate market outcomes based on intrinsic characteristics tied to race and gender. Ironically, or not, the latter is the Democrat’s approach. Capitalism pays people what they are worth, goes the theory, therefore racial and gender disparities are based on differences in human capital. In other words, systemic racial disparities represent the correct ordering of the world. Because people are paid what they are worth, racism has no bearing on economic outcomes.

This becomes theoretically incoherent when ‘systemic racism’ is raised. Systemic differences in economic outcomes by race and gender aren’t possible (in capitalist theory) for the reasons given. They are either based in ‘real’ differences reflected in race and gender— the racialist explanation, or they are market failures that call all of capitalist distribution into question. As with slavery, a market ‘distortion’ of this sort affects distribution more broadly. But more fundamentally, if capitalism doesn’t ‘work’ regarding race and gender, where does the confidence come from that it works anywhere? Social divisions exist along an infinite number of axes.

There are complications with blanket assertions that this neoliberal frame is incoherent. Differences in ‘human capital’ function to explain individual differences in economic outcomes in theory, but not systemic differences, e.g. by race or gender, unless race or gender determine the process of acquiring human capital. In the latter case, markets perpetuate the cycle of systemic economic exclusion while delivering economic outcomes that are as they should be (in neoliberal theory). Ironically, neoliberal theories of racism like white fragility specifically reject the redistribution of political and economic power needed to break this cycle because doing do would be ‘interference’ in markets. Equality of opportunity is less plausible than it was for this very reason.

Five decades of neoliberalism produced the conditions that are now the target of nationwide protests. The left program put forward in the Democratic primary was the last, best hope for solving what ails us. The political kneecapping carried out by radical centrists was to keep capital in the middle of all large public initiatives. The elected political leadership exists to maintain this relationship no matter how many people have their lives destroyed or die from their efforts. The upcoming election is an effort to lay this political dysfunction at our feet. Don’t fall for it.

Rob Urie is an artist and political economist. His book Zen Economics is published by CounterPunch Books.