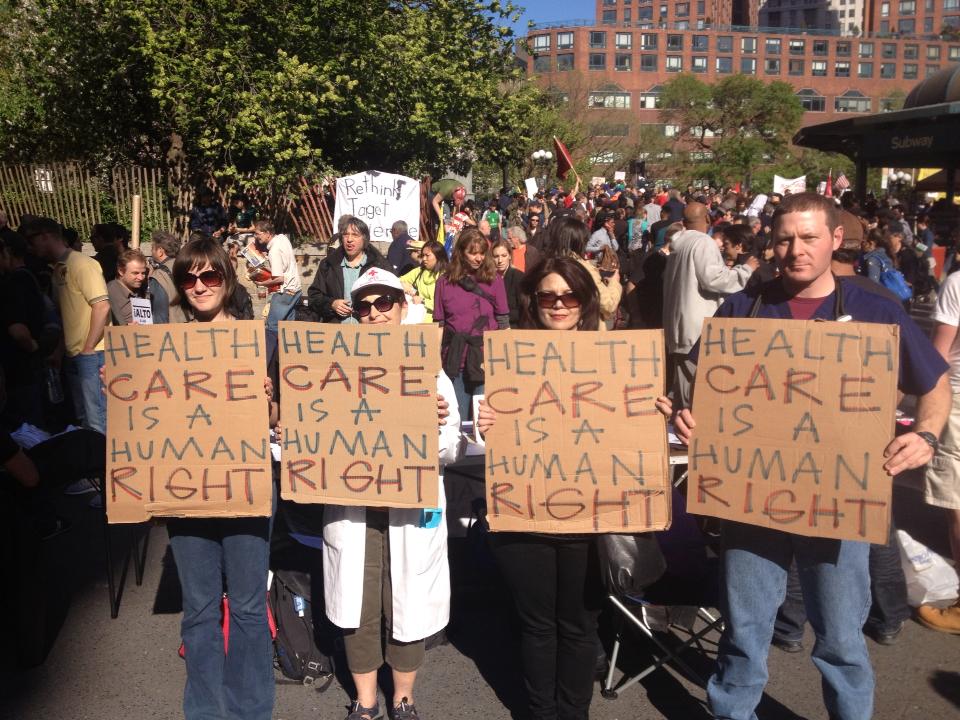 Neoliberalism: Government In The Service Of Corporations, Not People

Obamacare an enabler of the market, not a solution to the US healthcare crisis

What Kind of Problem is the ACA Rollout for Liberalism?

By Mike Konczal
Next New Deal, The blog of the Roosevelt Institute

Healthcare.gov looks to be having a disastrous launch.

Conservatives in particular think this website has broad implications for liberalism as a philosophical and political project. I think it does, but for the exact opposite reasons: it highlights the problems inherent in the move to a neoliberal form of governance and social insurance, while demonstrating the superiorities in the older, New Deal form of liberalism.

The general problem is that “More than 30 states refused to set up their own exchanges, requiring the federal government to vastly expand its project in unexpected ways.”

1. is heavily means-tested
2. is provided by private agents to individuals
3. leaves open the possibility of adverse selection because of market segmentation
4. gives discretion to the states to either help or undermine the process
5. is designed to ensure choice and competition

1. is a program that is universal to all who qualify for it
2. has the government running the system itself
3. uses compulsion to default people into social insurance to prevent adverse selection
4. situates the program at the federal level, to avoid states undermining it
5. does all this to ensure better provisioning outcomes, using government’s scale and efficiency

What we often refer to as Category A can be viewed as a “neoliberal” approach to social insurance, heavy on private provisioning and means-testing. This term often obscures more than it helps, but think of it as a plan for reworking the entire logic of government to simply act as an enabler to market activities, with perhaps some coordinated charity to individuals most in need.

This contrasts with the Category B grouping, which we associate with the New Deal and the Great Society. This approach creates a universal floor so that individuals don’t experience basic welfare goods as commodities to buy and sell themselves. This is a continuum rather than a hard line, of course, but readers will note that Social Security and Medicare are more in Category B category rather than Category A. My man Franklin Delano Roosevelt may not have known about JavaScript and agile programming, but he knew a few things about the public provisioning of social insurance, and he realized the second category, while conceptually more work for the government, can eliminate a lot of unnecessary administrative problems.

The choice between Category A and B above will characterize much of the political debate in the next decade. It’s important we get more sophisticated analysis of what has gone wrong with the ACA rollout to better appreciate how utilizing “the market” can be far more cumbersome and inefficient than the government just doing things itself.

Why Is Obamacare Complicated?

Mike Konczal says most of what needs to be said about the underlying sources of Obamacare’s complexity, which in turn set the stage for the current tech problems. Basically, Obamacare isn’t complicated because government social insurance programs have to be complicated: neither Social Security nor Medicare are complex in structure. It’s complicated because political constraints made a straightforward single-payer system unachievable.

It’s been clear all along that the Affordable Care Act sets up a sort of Rube Goldberg device, a complicated system that in the end is supposed to more or less simulate the results of single-payer, but keeping private insurance companies in the mix and holding down the headline amount of government outlays through means-testing. This doesn’t make it unworkable: state exchanges are working, and healthcare.gov will probably get fixed before the whole thing kicks in. But it did make a botched rollout much more likely.

So Konczal is right to say that the implementation problems aren’t revealing problems with the idea of social insurance; they’re revealing the price we pay for insisting on keeping insurance companies in the mix, when they serve little useful purpose.

So does this mean that liberals should have insisted on single-payer or nothing? No. Single-payer wasn’t going to happen — partly because of the insurance lobby’s power, partly because voters wouldn’t have gone for a system that took away their existing coverage and replaced it with the unknown. Yes, Obamacare is a somewhat awkward kludge, but if that’s what it took to cover the uninsured, so be it.

The intellectually serious debate is between those who believe that the government should simply provide basic health insurance for everyone and those proposing a more complex, indirect approach that preserves a central role for private health insurance companies.

A system in which the government provides universal health insurance is often referred to as “single payer,” but I like Ted Kennedy’s slogan “Medicare for all.” It reminds voters that America already has a highly successful, popular single-payer program, albeit only for the elderly. It shows that we’re talking about government insurance, not government-provided health care. And it makes it clear that like Medicare (but unlike Canada’s system), a U.S. national health insurance system would allow individuals with the means and inclination to buy their own medical care.

The great advantage of universal, government-provided health insurance is lower costs. Canada’s government-run insurance system has much less bureaucracy and much lower administrative costs than our largely private system. Medicare has much lower administrative costs than private insurance. The reason is that single-payer systems don’t devote large resources to screening out high-risk clients or charging them higher fees. The savings from a single-payer system would probably exceed $200 billion a year, far more than the cost of covering all of those now uninsured.

Nonetheless, most reform proposals out there – even proposals from liberal groups like the Century Foundation and the Center for American Progress – reject a simple single-payer approach. Instead, they call for some combination of mandates and subsidies to help everyone buy insurance from private insurers.

Some people, not all of them right-wingers, fear that a single-payer system would hurt innovation. But the main reason these proposals give private insurers a big role is the belief that the insurers must be appeased.

That belief is rooted in recent history. Bill Clinton’s health care plan failed in large part because of a dishonest but devastating lobbying and advertising campaign financed by the health insurance industry – remember Harry and Louise? And the lesson many people took from that defeat is that any future health care proposal must buy off the insurance lobby.

But I think that’s the wrong lesson. The Clinton plan actually preserved a big role for private insurers; the industry attacked it all the same. And the plan’s complexity, which was largely a result of attempts to placate interest groups, made it hard to sell to the public. So I would argue that good economics is also good politics: reformers will do best with a straightforward single-payer plan, which offers maximum savings and, unlike the Clinton plan, can easily be explained.

We need to do this one right. If reform fails again, we’ll be on the way to a radically unequal society, in which all but the most affluent Americans face the constant risk of financial ruin and even premature death because they can’t pay their medical bills.

Mike Konczal’s article makes important distinctions between social insurance along the lines of private market provisioning (neoliberal), as with the Affordable Care Act, and social insurance along the lines of public provisioning (New Deal liberal), as with single payer, and why “utilizing ‘the market’ can be far more cumbersome and inefficient than the government just doing things itself.”

Paul Krugman reinforces Konczal’s thesis by saying that the implementation problems are “revealing the price we pay for insisting on keeping insurance companies in the mix, when they serve little useful purpose.” Yet Krugman says liberals were correct in not insisting on single payer, because Obamacare, a kludge, was “what it took to cover the uninsured.” He remains silent on the fact that 31 million will still remain uninsured.

Krugman’s statement is a far cry from what he wrote in 2005. He rejected the so-called lesson of the Clinton fiasco – that any reform must buy off the private insurance industry – writing then, “good economics is also good politics: reformers will do best with a straightforward single-payer plan.”

Konczal’s astute framing of private social insurance versus government social insurance can be useful in our advocacy work since it makes it very clear why it is imperative that we first get policy right, and then conform the politics to match the policy. The great tragedy of Obamacare is that we strangled the policies in order to protect our terribly flawed politics.