Nestlé Pays $200 A Year To Bottle Water Near Flint

Above Photo: From theguardian.com

Luster lives in Flint, Michigan, and here, residents believe tap water is good for one thing: to flush the toilet.

“I don’t even water my plants with it,” she said.

Flint became synonymous with lead-poisoned water after government officials, looking to save money, switched the city’s water supply from Detroit city water to water from the corrosive Flint river.

Once the city had switched, the number of children with elevated lead exposure doubled; residents reported unexplained rashes and losing hair. An unpublished study recently found fetal deaths in Flint increased by 58% during the crisis.

With the money they make, they could come and fix Flint – and I mean the water plants and our pipes.

Suddenly, Flint was a cause célèbre. The Democratic presidential candidates Hillary Clinton and Bernie Sanders held a debate in Flint. Barack Obama visited to raise morale. Americans who could afford it started ripping out old lead pipes. Media outlets across the country started examining their own towns for lead.

Despite having endured lead-laden tap water for years, Flint pays some of the highest water rates in the US. Several residents cited bills upwards of $200 per month for tap water they refuse to touch.

But just two hours away, in the tiny town of Evart, creeks lined by wildflowers run with clear water. The town is so small, the fairground, McDonald’s, high school and church are all within a block. But in a town of only 1,503 people, there are a dozen wells pumping water from the underground aquifer. This is where the beverage giant Nestlé pumps almost 100,000 times what an average Michigan resident uses into plastic bottles that are sold all over the midwest for around $1.

To use this natural resource, Nestlé pays $200 per year. 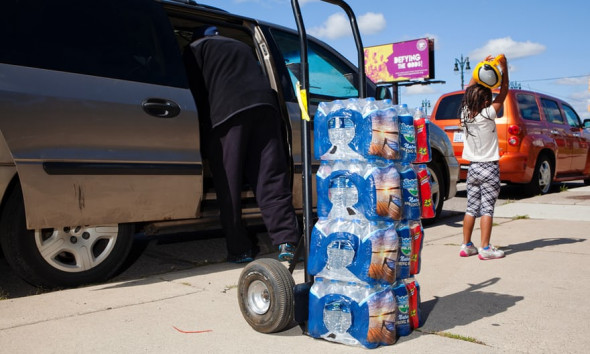 – A volunteer loads bottles of water into the car of a family whose water has been shut off. Photograph: Garrett MacLean for the Guardian

Now, Nestlé wants more Michigan water. In a recent permit application, the company asked to pump 210m gallons per year from Evart, a 60% increase, and for no more than it pays today. In the coming months, the state is set to decidewhether Nestlé can to pump even more.

The proximity of the Nestlé plant to Flint’s degraded public water supply has some Michigan residents asking: why do we get undrinkable, unaffordable tap water, when the world’s largest food and beverage company, Nestlé, bottles the state’s most precious resource for next to nothing?

“It’s almost like a civics class for us Flint folks,” said Luster. “You shouldn’t be able to profit off of water – it’s free. It came out of the ground.”

Still, in Michigan, what people have a problem with is a company bottling the state’s water and selling it back to people who, through no fault of their own, are completely dependent on it.

Bottled water is “a necessity of life right now”, said Chuck Wolverton, a Flint resident. He won’t touch his tap water. He drives 15 miles outside of town to his brother’s house to shower every night, where he often also washes his clothes. His water bill, he said, was around $180 per month. “I don’t even give it to my dogs.” 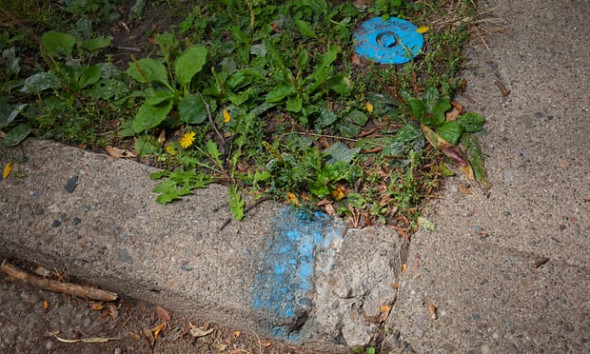 The Detroit water and sewerage department marks the curb in front of houses whose water it has shut off, including this house in Detroit’s North End neighborhood. Photograph: Garrett MacLean for the Guardian

In a state where officials denied Flint’s water was poisoned with lead; where Detroit residents choose between heat and water; where the water-borne, pneumonia-like legionnaire’s disease killed a dozen; and where gastrointestinal bugs spread among residents who lacked (or didn’t trust) water, Nestlé’s request seemed like salt on a wound.

“Don’t seem right, because they’re making profits off of it,” Wolverton said, with several fresh cases of bottled water in the back of his car.

“With the money they make, they could come and fix Flint – and I mean the water plants and our pipes,” Luster said of Nestlé. “Me and you wouldn’t even be having this conversation.”

Activists here, such as Luster, see Nestlé’s bottling plant and Flint’s tainted water and Detroit’s mass water shutoffs as connected – part of an “ecosystem” (as Luster calls it) meant to put water into private hands.

In 2017, bottled water became the most consumed bottled beverage in North America, due in part to fears of lead-tainted water and concerns about the negative health effects of sugary beverages, analysts said.

Nestlé had $92bn in sales in 2016, and $7.4bn from water alone. Nevertheless, the company pays nothing for the 150 gallons per minute it already pumps from the ground in central Michigan. The $200 per year is just an administration fee.

“We’re not saying give everyone a new car, a new home. We’re just asking for our water treatment,” Luster said. “That’s a no-brainer.”

Nestlé doesn’t bicker with the price it gets water at, but it does maintain that when it turns Evart water into brands like Nestlé Pure Life and Ice Mountain, it is being a steward of the environment.

The company has 52 bottled water brands altogether, including some of the best known in the world – Poland Spring, Perrier, San Pellegrino.

“Nestlé promotes sustainable water practices throughout its operations,” said the company’s 2016 annual report. “For Nestlé Waters, this starts at the source with engagement activities with local communities to ensure the sustainability of our shared public water resources.”

Many people in Evart would probably disagree, and they’re hardly alone. A small town in Canada was recently disappointed that it was outbid by Nestlé in a bid to fund a long-term water source for the town. And environmentalists in California are watching closely whether Nestlé can continue to pump water – for $524 – out of San Bernardino national forest on a permit that expired nearly 30 years ago.

Further, Nestlé’s annual report does not address plastic pollution: a problem piling up at one million bottles per minute according to a Guardian analysis. Some campaigners believe plastic pollution to be the most significant environmental problem behind climate change. Studies have also begun to find plastic pollution in the food chain – in fish, salt, honey, beer and tap water. 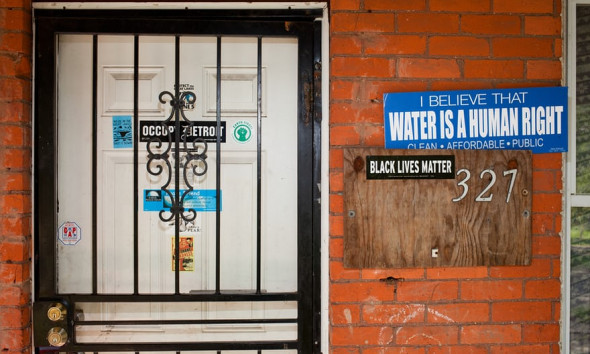 A home in Detroit’s North End neighborhood whose water has been shut off. Photograph: Garrett MacLean for the Guardian

The Rev Dr William Barber II, a powerhouse preacher sometimes compared to Dr Martin Luther King Jr for his ability to weave together left-leaning politics and Christian teachings, trained some of Michigan’s local water activists in August. Many said they were directly politicized by rolling water crises in Flint and Detroit.

“One of the reasons we’re here today,” said Barber, standing backstage in a community college in Detroit, was “this water crisis”.

Social justice groups focused on water in Michigan have become an increasingly powerful force. Protesters pushed for public hearings on Nestlé’s permit in January. Residents in Flint agitated for continued state support in February. Activists in Detroit blocked city contractors from shutting off residents’ water, and won a reprieve when a judge dismissed charges against them.

“Now, I firmly support economic development in our state, and I recognize the extent to which Nestlé Waters’ presence in Michigan has helped our economy,” Sneller said, in an opinion article in April. “However, there needs to be a balance between the economic benefit of Nestlé and the responsibility of the MDEQ to protect Michigan’s environment and natural resources.”

On Friday, activists from Flint will join activists from Evart, where Nestlé pumps water. They will be joined by groups from Detroit, where people are having their water shut off, from north of the border, where the social justice group Council of Canadians is based, and from indigenous communities around the Great Lakes. Together, they want to promote a “water summit” on “human rights and water sovereignty”.

“When it comes to water, we should be working within the government to make that as cheap as possible,” Barber said. “Privatizing that which the lord created is just wrong”.

Where Barber spoke, in Detroit, water still technically belongs to the city’s residents. But in neighborhoods where one in five homes had their water shut off last year, it is anything but affordable.

‘Water is not affordable to us’

Nicole Hill, a mother of three, has her water shut off every few months. It still costs “more than $200 a month”.

The first time her water was shut off, she said, “I get up, I make them breakfast, I take them to school, I come back to wash the dishes and no water comes out the faucet.”

Hill went so far as to file a class action lawsuit to try to secure her community’s right to affordable water. She lost in a lower court and appealed. Last year, a panel of three federal judges ruled against her, writing: “A right of this nature is not rooted in our nation’s traditions.”

Valerie Jean, a mother of five, bonded with her neighbors after her entire block was cut off from water when multiple residents fell behind on their bills. Still struggling, Jean perpetually seems to have a blue stripe in front of her home, a kind of scarlet letter painted on front yards by city workers to highlight a home’s water access point. That makes it easier to shut water off.

“When they shut off a whole community, it shows water is not affordable to us,” said Jean. 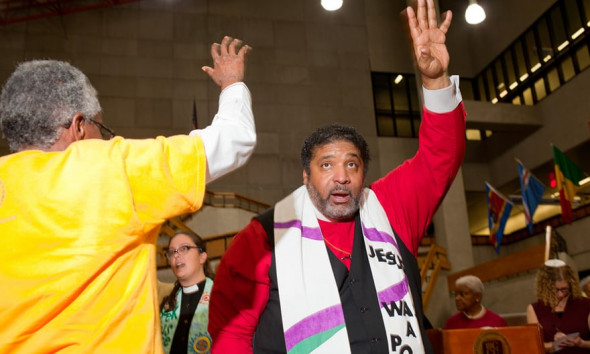 Barber spoke to a crowd of hundreds in Detroit, with 11,000 more people watching online. The rally was not just about raising spirits. It was part of the Poor People’s Campaign, a “moral revival” organized by Barber and his co-chair, the Rev Dr Liz Theoharis, to train impoverished Americans to be activists.

Barber is a tall, stout man with a teeter-totter gait. He’s got hands the size of a bear’s and builds his speeches like a fire – nurturing a spark into a cheering, song-singing, burn-the-house-down blaze.

“The prophet said, ‘Take away your prayers, take away your sacrifice – if you want to please me, let justice roll down like water!’”

Barber started with a cold crowd, but some were soon in tears, and answered calls in unison – “Forward together!” Barber yelled. “Not one step back!” the crowd shouted back.

“Not one step back!”

In April 2014, Flint switched from Detroit city water to the corrosive water in the Flint river. Luster remembers – it happened on her daughter’s birthday. She and her nine-year-old daughter (then seven) quickly became sick. By July, she had collapsed at her job as a retail manager. Even today, strange, unexplained health effects remain.

Luster, 43, has had part of her uterus removed, an unexplained abscess taken from her left breast, and a lymph node removed from her right underarm and back. She has lost a five-gallon bag’s worth of hair.

Now, she is a full-time organizer with Flint Rising, and is considering law school. And almost two years after the crisis made national headlines, Luster still does everything in her Flint home with bottled water – cooking, washing hands, and even seemingly innocuous tasks, like ironing. She filters bottled water to drink.

By this summer, the state of Michigan alone will have provided 157m bottles of water to Flint and counting. Once, a news crew counted how many 16.9-ounce bottles Luster’s household used in a day – 151. “So now you see, when I see a bottle of water, I don’t see, ‘Let me go get a drink.’”