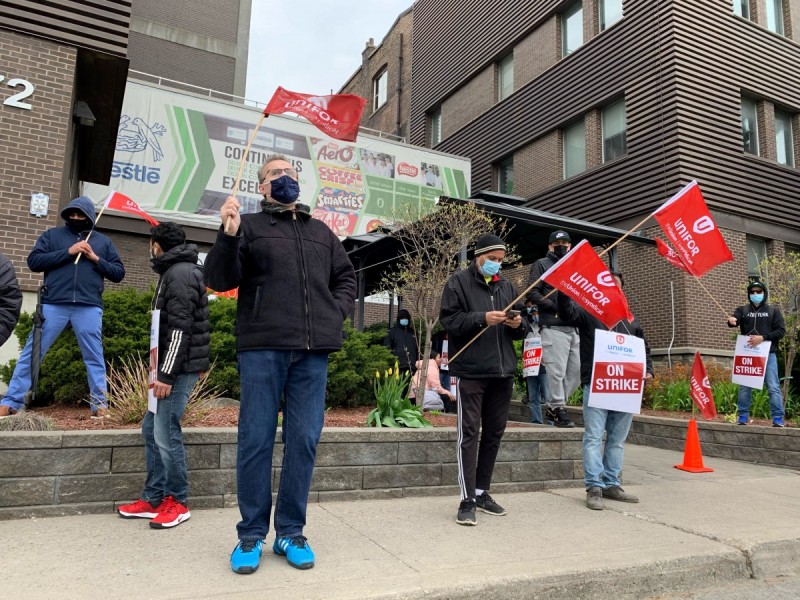 Coffee Crisps cannot be a point of national pride when the Canadians who make them cannot have justice.

Amidst the COVID-19 pandemic, workers at the Nestlé manufacturing plant in Toronto’s west end are facing unfair conditions including part-time pay, pension cuts and precarious employment, and management is unwilling to negotiate a reasonable contract with its employees. As of May 19, more than 470 workers are on indefinite strike.

Workers at the factory, which produces Kit Kat bars and is the the only manufacturer of Coffee Crisp in the world, started their picket line on May Day 2021. Long-term disputes around the security of permanent employment and a defined benefit pension plan have previously disrupted production at the facility.

Negotiations toward a new contract fell through over the central issue of a “tiered” workforce, which is being used by the company to deny employees equal pay for equal work, according to Unifor Local 252, the union representing chocolate production and skilled trades workers.

Nestlé’s management devised this tiered workforce scheme, formalizing a system for informal labour, in an attempt to divide workers between senior employees and new hires. The “P” classification system was part of the previous collective bargaining agreement between Nestlé Canada and Unifor Local 252, which drove the workers to strike in 2017.

Under this system, P-1 workers constitute full-time, senior employees while new hires are funnelled into the P-0 category, and are paid part-time wages for the same tasks as their P-1 colleagues. In addition to lower wages, P-0 workers are provided no pension, and benefits are few, with no clear pathway to obtaining P-1 status even after years of work.

In essence, the tiered contract tries to divide the workforce into a distinct wage hierarchy, based solely on hiring dates.

According to several workers, around 20 percent of the factory’s entire workforce are part-time workers, and that proportion is growing. P-0 workers are often given tasks that are originally assigned to P-1 workers. Although the number of actual hours worked for P-0 workers can amount to full-time, P-0 workers are not classified full-time workers.

According to management, these employees are hired “to supplement the seasonal nature of the confectionery business.” In their most recent collective agreement, the pay for “supplemental” workers is capped at $17.30 an hour, with wages frozen for three years, and is $6.50 an hour less than starting pay for full-time P-1 staff.

Prior to recent contract negotiations, Nestlé agreed to make 80 P-0 workers into permanent employees, and to move as few as ten P-0 workers every year to P-1 status, reflecting their actual hours worked. New, temporary employees in 2019 hoped to be moved up to P-1 status within three years under the existing contract. Today, however, under ongoing contract negotiations, management has moved the goal posts and said it would only make temporary employees permanent when they reach 8,000 hours, or approximately four years of full-time work.

As many of these temporary workers are given fewer than 1,000 hours in shifts per year after more than two years, it would now take six to eight years to secure the hours for full-time status under the company’s proposal. Unifor Local 252 says this is “an impossible feat.”

Tiered contracts are used to undermine worker solidarity from within, establishing divisions between insiders and outsiders in the process. While Nestlé “supports open dialogue and negotiations” with the labour union, it continues to employ this tool to divide workers.

For decades, these concessions have been central to creating unfair and unequal conditions across industries, designing pay gaps and attacking workers’ rights. The history of two-tier systems demonstrates just how harmful and commonplace this has become.

Also at issue, according to Unifor Local 252, is the multinational company’s defined benefit pension plan, which has been contentious since a strike in 2014 after the company claimed it could not afford a secure retirement for long-time employees.

About a quarter of the Nestlé’s workers and all new hires were offered watered down pensions. Rather than renegotiating, both Unifor and Nestlé had agreed to temporarily roll over the previous contract agreement in 2020 to weather the impacts of COVID-19. It is unclear whether employees will ever get pension funds financed using the workers’ contributions.

Even through the pandemic, Nestlé’s appetite for profit never abated, reporting double-digit growth from chocolate and confectionery sales. The company’s executive board rewarded itself with a bonus 13.7 percent higher than those doled out last year. What’s more, the company delivered $14.5 billion to its shareholders in 2020 according to a recent press release.

Expectedly, workers are not seeing the same gains. Instead, they are forced to accept pay cuts, reduced hours, and a crescendo of attacks on job security. Following the May 1 strike, Nestlé suspended workers’ benefits in retaliation. This is unprecedented, according to workers, some of whom have more than three decades of employment and contract dispute experience at the Toronto plant.

More than 3.5 billion Smarties, as many as 500 million Kit Kat fingers, and 23 million Coffee Crisp bars are made annually inside the factory. Overall, 18,000 tonnes of confectionery are produced every year. Machines are presently shut down, but on a normal day, the 24/7 operation is run by approximately 500 workers, many of whom are newcomers, tasked with general production from packaging boxes, cleaning, and monitoring. Workers rotate in 30 minute shifts to limit the fatigue associated with repetitive tasks.

According to a Nestlé job ad posted earlier this month, “our people are the face of our business, and their pride in a job well done is the key to our success.” If there is any pride among Nestlé workers, it is pride in their solidarity, sacrifice, and hard work. Equal pay for equal work, despite attempts to divide workers through the two-tier system, is what they’ve been fighting for, and the May Day strike is a clear demonstration of workers’ structural power within the capitalist economy.

Rather than complimenting big business for maintaining exploitative wages in Canada, governments should be providing strong legislation with clear language that protects workers.

Ultimately, workers need paid sick days, decent wages and hours, information on all relevant data about work assignments, an end to racism and bullying in the workplace, and a real path to full and permanent immigration status.

Coffee Crisps cannot be a point of national pride when the Canadians who make them cannot have justice.