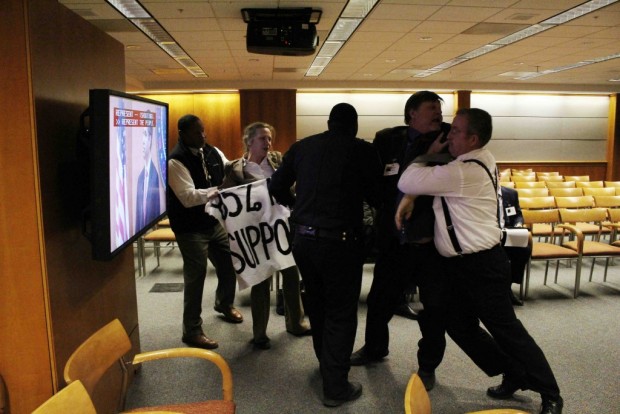 FCC security violently attacked Dr. Margaret Flowers and Kevin Zeese of Popular Resistance, knocking them to the ground. As they were dragged from the room, they chanted, “Commissioner Pai, don’t you see Republicans love net neutrality? Stop being a mouthpiece for the Telecoms–your job is to represent the public interest. Title II now! The Internet should be a level playing field for all not one rigged for Comcast and Verizon. No crony capitalism for Comcast and Verizon. Equal access for all.”

After the activists left the building, FCC security continued to harass them, threatening them with arrest for standing on a public sidewalk conducting an interview with a camera crew. The head of FCC security threatened to arrest Zeese and Flowers for trespassing in the meeting, even though they were given badges to attend the meeting after security gave their names to Commissioner Pai. The head of security also threatened to charge them with assault, even though it was him and his team who attacked Flowers and Zeese. Fight for the Future put out the following tweet to try to prevent any charges:

Activists have never been treated so violently at an @FCC event. Call @AjitPaiFCC‘s press office and ask why: Matthew Berry (202) 418-2005

The action was organized by PopularResistance.org with support from the digital rights group Fight for the Future. These two groups previously coordinated on the Occupy the FCC encampment last year that helped put Title II reclassification on the table at the FCC. Fight for the Future were also lead organizers of the September 10th Internet Slowdown protest along with Demand Progress, and the coalition website they helped build, BattleForTheNet.com was responsible for more than 1/4 of all the comments the FCC received about net neutrality last year. PopularResistance.org has also organized a series of protests and direct actions on this issue, including a civil disobedience action where they blockaded FCC Chairman Tom Wheeler’s driveway as well as occupying the FCC this spring.

Margaret Flowers said: “This is how the FCC treats free speech now? We were attacked for exposing the truth about a statement read by Commissioner Pai that could have been written by the telecom industry.” Zeese added: “Fear of our message that there is widespread support for net neutrality even among Republicans (where 85% support) resulted in the police assaulting us in an attempt to prevent that message from being heard.”

Evan Greer, campaign director of Fight for the Future, said, “Net neutrality is not a partisan issue, but corrupt politicians in Washington DC whose campaigns are funded by the Telecom industry are desperate to make it one.” She added, “Given that Republican voters overwhelmingly oppose Internet fast lanes and support the principles of net neutrality, it’s clear that officials like Ajit Pai, who is a former high ranking lawyer for Verizon, are ignoring the public will and working for the industries they’re supposed to be holding accountable.”

While the action unfolded in Washington, DC today, the battle for the net continued to rage online. Fight for the Future, Demand Progress, Free Press and other groups are organizing a sustained effort called the Internet Countdown, keeping up a constant barrage of online protest between now and the FCC’s vote on February 26th. More than 2,500 sites have joined the effort so far including Bluehost, BoingBoing, Thunderclap, and Daily Kos. Major sites like Tumblr and Mozilla are participating with custom landing pages encouraging their users to take action in support of real net neutrality protections through Title II reclassification. More than 6,400 people have signed up to join the countdown by automatically tweeting every day between now and the February 26th vote.

FCC security immediately tackled the activists as soon as they stood up to speak out and hold up the banner.

FCC security continued to harass the activists even once they were outside on a public sidewalk.

‘Net neutrality’ is no government takeover: Our view, USA Today

Public ‘being misled’ on net neutrality?, The Hill