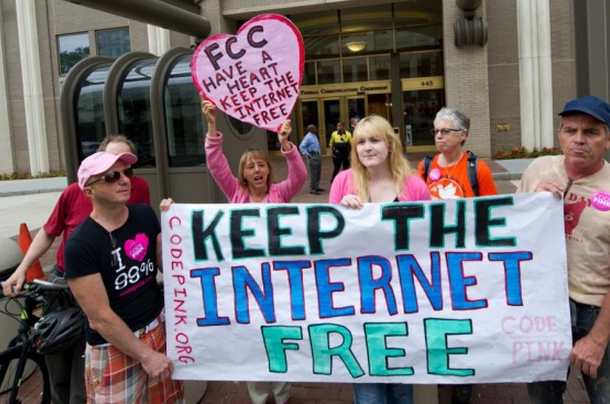 Internet activists scored a landmark victory on Thursday as the top US telecommunications regulator approved a plan to govern broadband internet like a public utility.

Following one of the most intense – and bizarre – lobbying battles in the history of modern Washington politics, the Federal Communications Commission (FCC) passed strict new rules that give the body its greatest power over the cable industry since the internet went mainstream.

FCC chairman Tom Wheeler – a former telecom lobbyist turned surprise hero of net neutrality supporters – thanked the 4 million people who submitted comments on the new rules. “Your participation has made this the most open process in FCC history,” he said. “We listened and we learned.”

Wheeler said that while other countries were trying to control the internet, the sweeping new US protections on net neutrality – the concept that all information and services should have equal access online – represented “a red-letter day for internet freedom”.

“The internet is simply too important to be left without rules and without a referee on the field,” said Wheeler. “Today’s order is more powerful and more expansive than any previously suggested.”

Barack Obama – who had pushed for the regulations – praised the decision and thanked the people who had protested for tighter rules. “I ran for office because I believed that nothing can stand in the way of millions of voices calling for change. That’s the backbone of our democracy–and you’ve proven that this timeless principle is alive and well in our digital age.So to all the people who participated in this conversation, I have a simple message: thank you,” the president wrote.

But Republicans and cable companies were quick to attack the move. The National Cable and Telecommunications Association said the rules would hurt “everyday broadband users” by raising costs and reducing investment.

Broadband providers will be banned from creating so-called “fast lanes” blocking or slowing traffic online, and the regulator will oversee mobile broadband as well as cable. The FCC would also have the authority to challenge unforeseen barriers broadband providers might create as the internet develops.

Activists and tech companies argue the new rules are vital to protect net neutrality – the concept that all information and services should have equal access to the internet. The FCC’s two Republican commissioners, Ajit Pai and Michael O’Rielly, voted against the plan but were overruled at a much anticipated meeting by three Democratic members on the panel.

Republicans have long fought the FCC’s net neutrality protections, arguing the rules will create an unnecessary burden on business. They have accused Obama of bullying the regulator into the move in order to score political points, with conservative lawmakers and potential 2016 presidential candidates expected to keep the fight going well into that election campaign.

Pai said the FCC was flip-flopping for “one reason and one reason only: president Obama told us to do so”.

“This is the FCC using all the tools in our toolbox to protect innovators and consumers.”

Obama offered his support to the rules late last year, following an online activism campaign that pitched internet organisers and companies from Netflix and Reddit to the online craft market Etsy and I Can Has Cheezburger? – web blog home of the Lolcats meme – against Republican leaders and the cable and telecom lobbies.

Broadband will now be regulated under Title II of the Communications Act – the strongest legal authority the FCC has available. Obama called on the independent regulator to implement Title II last year, leading to charges that he unduly influenced Wheeler’s decision that are now being investigated in Congress.

“Today’s decision by the FCC to encumber broadband Internet services
with badly antiquated regulations is a radical step that presages a time
of uncertainty for consumers, innovators and investors,” said Michael Glover, Verizon’s senior vice-president for public policy and government affairs.

To illustrate what Verizon saw as the FCC’s old-fashioned thinking, the company put out its news release in typewriter font and dated it 1934. The release also went out in Morse code.

Before the meeting on Thursday, a small band of protesters gathered in the snow outside the FCC’s Washington headquarters, in celebration of their success in lobbying for a dramatic U-turn in regulation. Wheeler and his Democratic colleagues, Mignon Clyburn and Jessica Rosenworcel, were cheered as they sat down for the meeting.

Joining the activists outside was Apple co-founder Steve Wozniak, who said the FCC also needed more power to prevent future attacks on the open internet.

“We have won on net neutrality,” Wozniak told the Guardian. “This is important because they don’t want the FCC to have oversight over other bad stuff.”

Tim Berners-Lee, inventor of the world wide web, addressed the meeting via video, saying he applauded the FCC’s decision to protect net neutrality: “More than anything else, the action you take today will preserve the reality of a permission-less innovation that is the heart of the internet.”

The fight for net neutrality has been largely fought online. The millions of messages were sent to the FCC during its comment period on the rules before Thursday’s landmark series of votes.

Last year the FCC looked set to approve rules that would have allowed internet service providers to create “fast lanes” on the internet. Critics charged such a move would create a two-tiered internet and stifle competition.

Tiffiniy Cheng, co-founder of internet advocacy group Fight for the Future, said: “This is our free speech struggle in the digital age. Institutions of power should know by now: internet users will not stand idly by while anyone tries to take their freedom away.”

Municipal broadband companies in Chattanooga, Tennessee, and Wilson, North Carolina, pushed for the expansion plans, against which private cable and telecom rivals have been lobbied intensely. Twenty US states currently have limits or bans on local governments building, owning or partnering with others to give local businesses and residents a choice in high-speed internet access. That vote, too, fell along party lines, potentially opening many US cities to wider competition.

Voting for the municipality change, Clyburn said millions of people had been left in “digital darkness” because cable companies did not want to expand in their areas. The Republican commissioners, O’Rielly and Pai, called the change “appalling” and “un-constitutional”.

“Unfortunately for the Commission, all the lipstick in the world cannot disguise this pig,” said Pai.

Christopher Mitchell, director of community broadband networks at the Institute for Local Self-Reliance, said Thursday’s vote could set “an historic precedent” that could “profoundly impact the lives of three-quarters of Americans who are without broadband or a choice in their service because of big cable underinvestment in their towns”.

The FCC was forced to rewrite its broadband rules after Verizon successfully challenged its authority to stop it creating fast lanes or to more broadly regulate the industry under its last set of regulations, the Open Internet Order of 2010. Legal challenges for the new rules are also inevitable.

“When internet users come together to fight for something they believe in,” said Fight for the Future’s Cheng, “nothing can stop them.”