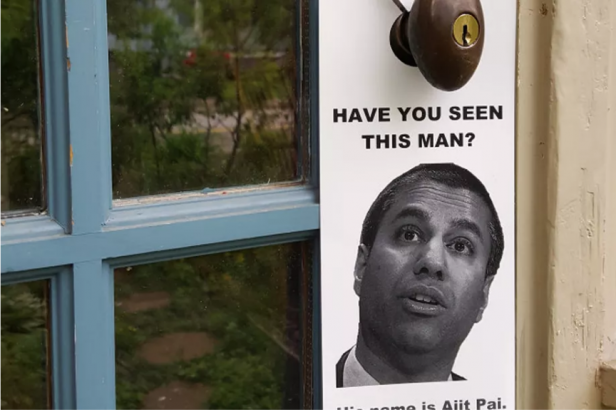 Note: Join our #VigilToSaveNetNeutrality which begins next Sunday at 4 and will go on every rush hour until the FCC meeting on the 18th.

Federal Communications Commission chairman Ajit Pai unveiled his plans to reverse net neutrality last month, and the proposal is expected to face an initial vote on May 18th. While net neutrality supporters have displayed their opposition to Pai’s continued stance against the 2015 ruling in a few creative ways, this weekend a campaign aimed to hit the chairman close to home — literally.

On Sunday, protesters from the Protect Our Internet campaign went around Pai’s neighborhood in Arlington, Virginia, and distributed door hangers at nearby homes, prompting people to be aware of their neighbor’s efforts to limit internet freedom. The flyers feature a black-and-white photo of Pai, along with a short description of the chairman’s background and how his proposal would roll back open internet rules.

According to a blog post by the activists, hundreds of signs were circulated and the crew received “friendly support from the neighbors they spoke to.”

Knock knock! It’s #netneutrality – #savetheinternet and stop @AjitPaiFCC from selling us out to telecoms! pic.twitter.com/rnE34AhuwQ

“Ajit Pai was a Verizon lawyer and is still acting like Verizon lawyer,” Kevin Zeese, a protester involved in the door flyer campaign, told DCMediaGroup.“He is not acting like someone who is working in the public interest.”

Ahead of the initial vote, Protect Our Internet campaigners also plan to hold a “vigil” in front of Pai’s house next Sunday, where protestors are encouraged to bring signs that explain why they support net neutrality. They also plan to continue rallying two more times until the first vote on May 18th.

The strategy to invade an FCC chairman’s home and neighborhood isn’t new — in 2014, activists also staged a protest outside of then-chairman Tom Wheeler’s house by blocking his driveway and demanding he adopt tighter internet rules.