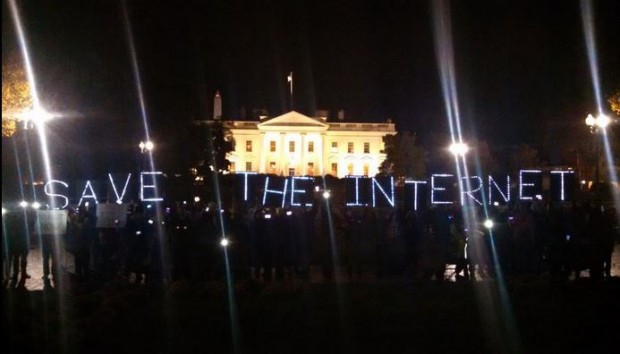 Protesters Promise to Escalate Protests, Warn Democrats they Will Lose the Votes of the Internet

Hundreds of Internet users – holding their lit up cell phones and laptops aloft in protest – joined more than 30 demonstrations across the U.S. on Thursday night. The protests were organized in just a few days after the leaking of an inadequate proposal being floated by Chair of the FCC, Tom Wheeler.

People took to the streets in an outpouring of anger over reports that the Federal Communications Committee is planning to push a “hybrid” net neutrality proposal that opens the door for cable company censorship and abuse. Crowds turned out in dozens of other cities as well including Boston, MA; San Francisco, CA; Philadelphia, PA; Anchorage, AK; Chicago, IL; and New York, NY. They promised the protests would escalate unless the FCC recommends full reclassification of the Internet as a common carrier where there can be no discrimination and equal access for all.

More than 100 people gathered in front of the White House in Washington, DC with lit-up signs reading “SAVE THE INTERNET,” chanting “Hey hey! Ho ho! Tom Wheeler has got to go.” Fight for the Future  created ProtestSign.org, a website that allows anyone to turn their phone, laptop, or tablet into a net neutrality protest sign.

FCC Chair Tom Wheeler was, appointed by President Barack Obama who promised to protect net neutrality when he ran for president. Wheeler served as the top lobbyist for the industry before becoming chair.

“Internet users are outraged that President Obama and his FCC appointee are choosing to ignore the voices of millions of people who have called for strong net neutrality rules that protect free speech and are instead pushing a sham proposal that fails to protect our rights,” said Evan Greer, Campaign Director of Fight for the Future, “These protests are just the beginning. I’ve never seen people turn out like this on such short notice. The President and the FCC should take warning: hell hath no fury like the Internet scorned.”

The #InternetEmergency rapid-response protests were organized with just a few days notice by Fight for the Future, Demand Progress, Free Press, and PopularResistance.org, advocacy groups that played a pivotal role in the massive Internet Slowdown online protest last month that mobilized more than 40,000 websites and sent more than 700,000 comments to the FCC and 300,000 phone calls to Congress in support of Title II reclassification.

“These protests will escalate. The American people have made it clear — they want Net Neutrality. The trial balloon leaked by Wheeler for a tiered Internet based on fees is a balloon the people will pop.  Wheeler is proposing exactly what millions of Americans told him they did not want. This is an example of the deep corruption in Washington, DC and of the growing illegitimacy of government because of its failure to listen to the people,” said Kevin Zeese of Popular Resistance.

Before the Mid-term elections, the corruption of Democratic Party candidates by the Internet industry was highlighted by this website: www.obamasinternet.com.  “The Democrats should have learned from the most recent election that they need to stop turning off their base. They cannot afford to lose the Internet community and expect to win elections in the future,” added Zeese.

The protests were inspired in part by massive demonstrations that swept Hungary after the government their proposed an Internet Tax, where protesters held up their cell phones as a sign of protest. For the #InternetEmergency protests, Fight for the Future took the tactic a step further by creating ProtestSign.org, a website that allows anyone to turn their phone, laptop, or tablet into a net neutrality protest sign.

If you want to call the White House you can do so here: www.didobamabreakthenet.com.  Tell them “Reschedule the Internet under Title II and put in place Net Neutrality. The hybrid plan being floated by Tom Wheeler is unacceptable. Demote Wheeler, his connections to Internet providers makes him an unacceptable chair of the FCC.”

More:
Nancy Scola, Protestors descend on the White House over the future of the Internet, Washington Post.

Protesters came out in the pouring rain in Philadelphia at Comcast’s Headquarters, by the Media Mobilizing Project

Next generation protesting in Anchorage, Alaska.

Demonstrators use ProtestSign.org, which lets anyone turn their phone, computer, or laptop into a net neutrality protest sign.

In Boston, MA at the State House organized by the Massachusetts Pirate Party

Save the Internet for future generations, Milwaukee, WI

Imagine the future without an Internet that is equal without discrimination. . .