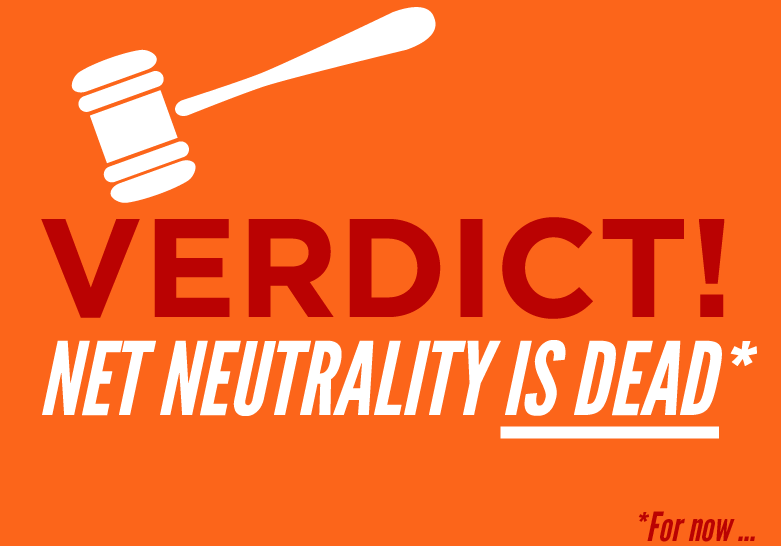 To some, like Columbia law professor Tim Wu, this is “a FEMA-level fail” for the FCC. But John Blevins sees it differently. Blevins, a law professor at Loyola University New Orleans College of Law, submitted a pro bono amicus brief in support of the FCC’s open Internet rules on behalf of various Internet engineers and technologists. So he was disappointed in the ruling. But he also thinks it’s being misinterpreted — and, in the long run, it could actually strengthen the FCC’s authority to protect the internet. He sent along these comments:
The reports of network neutrality’s death have been greatly exaggerated. Yes, the D.C Circuit Court of Appeals vacated the heart of the FCC’s open Internet rules. But it also, more quietly, ruled that the FCC has authority to regulate broadband providers to protect Internet openness. In doing so, the court may have handed the FCC — and the public — a victory that goes well beyond network neutrality.
The specific legal dispute is arcane, but the stakes are high. In 2010, the FCC adopted rules to protect the open Internet. These protections are essentially nondiscrimination requirements that apply to Internet access providers who physically connect end users to the Internet (i.e., telephone and cable companies).

Nondiscrimination rules are necessary because Internet access providers have a unique type of monopoly — a monopoly over you, the end user. When you choose to watch Netflix on your computer or smartphone, Netflix’s data can only reach you through your specific access provider. In effect, the access provider owns the only “driveway” to your house and can block content from entering. Or, it can decide to selectively impose additional tolls on the sites you request, which drives up the costs of those services and stifles new entrants who are less able to pay them.

The FCC’s open Internet rules quite sensibly prevented Internet access providers from engaging in blocking and other unreasonable discrimination. The D.C. Circuit, however, struck down these rules, which has led to criticisms that network neutrality is dead.

Fortunately, it’s not. The court vacated only these particular rules, not the FCC’s ability to act in the future. Specifically, it concluded that the FCC could regulate Internet providers under a statute known as Section 706, which authorizes the FCC to take various steps to promote broadband deployment. The court correctly recognized that prohibiting blocking and discrimination can lead to greater broadband deployment by increasing consumer demand. For instance, the introduction of the World Wide Web (which required no permission or toll payments) fueled the network investments of the 1990s. The growth of online video is driving modern investment today.

The court objected to FCC’s current versions of the rules because they swept too broadly and indiscriminately. In affirming Section 706 authority, however, the court simultaneously opened the door for the FCC to implement similar versions of these rules on a case-by-case basis against individual access providers who abuse their monopoly. In legal terms, the FCC can now act through adjudications instead of rule makings. Indeed, one bedrock principle of administrative law is that agencies are generally free to enforce law through either method.

For instance, under Section 706, the FCC could investigate and potentially sanction an individual access provider whose data caps are so restrictive that they threaten online video competition. At the same time, it could leave in place another data cap system designed for customers who use very little data. These decisions would, over time, deter other access providers from adopting measures that violate the Internet’s openness. The FCC could also use non-binding policy statements to give parties proper notice of their enforcement priorities.

Most importantly, the FCC will retain the credible threat of oversight of abusive behavior that threatens broadband deployment. Even if the FCC’s rules had been upheld, it is unlikely the FCC would have used them very often. The real virtue of those rules was as a deterrent—or as an enforcement of nondiscriminatory norms. In many cases, the FCC could have simply used the rules to draw attention to abusive practices through investigations and hearings. These measures would have generally provided sufficient deterrent assuming that sanctions were at least possible. Section 706 authority preserves that credible threat, if the FCC chooses to use it and the public demands it.

Interestingly, the Section 706 authority may even go beyond policing open Internet violations. For instance, many states have enacted laws that prevent cities and municipalities from creating their own broadband networks that would compete with incumbent access providers.

These laws are the worst kind of special interest protection, and were advocated by the very same access providers that claim to reject government intervention in the market. Given the economics of building broadband networks, governments are the only real hope for new broadband access competition. Section 706 speaks directly to this problem, and the FCC should seize the opportunity to investigate and potentially preempt certain states’ protectionist laws.

Finally, there is historical precedent for this approach. In the 1960s and 70s, the FCC engaged in a series of individual investigations and adjudications of AT&T’s monopoly telephone network. These proceedings paved the way for early computer networks by both authorizing the entry of new types of companies such as MCI, and by influencing AT&T to make changes that better facilitated the rise of early computer services. In these disputes, rules were less important than the continued engagement of the FCC and other interested members of the public in individual proceedings.

In sum, the FCC still has sufficient authority to protect the open Internet. The million-dollar question is whether it will choose to use it — and whether the public will pressure it to do so. Following the opinion, Chairman Tom Wheeler stated his preference to proceed in a “common law fashion,” which is legalese for individualized decision-making. I am therefore tentatively hopeful that the FCC is heading in this precise direction.