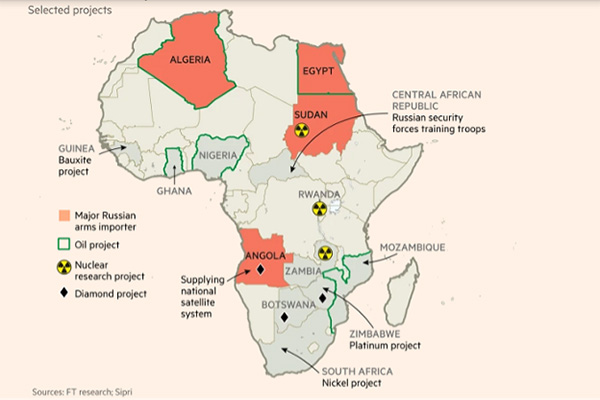 During the Cold War, the U.S. government invoked the pretext of Russian interference to justify a range of crimes, including the assassination of Congolese Prime Minister Patrice Lumumba, the overthrow of Pan-Africanist hero Kwame Nkrumah, the arrest of Nelson Mandela and intervention in the Angolan civil war.

Just when we thought that that era had passed, the House of Representatives on April 27 passed the “Countering Malign Russian Influence Activities in Africa” Act by a 415-9 vote.

The bill in part would direct the U.S. Secretary of State, using “detailed intelligence,” to identify in Africa “local actors complicit in Russian activities.”

The U.S. in turn may very well seek to punish those actors through economic sanctions or even regime change. “Russian aggression” is generally being invoked to justify greater U.S. intervention in Africa, including the expansion of the Africa Command (AFRICOM) and U.S. military base network across the continent.

The Nay votes for the “Countering Malign Russian Influence Activities in Africa” Act all came from Republicans. Supposed progressive stalwarts like Alexandria Ocasio-Cortez, Barbara Lee, Ro Khanna and members of the “Squad” all voted Yea.

The main sponsor of the bill, Gregory Meeks (D-NY), is Chairman of the House Foreign Affairs Committee.

After passage of the bill, he voiced his pride in the “exceptional show of bipartisan support,” which he said “demonstrated how Putin’s war in Ukraine, and the Kremlin’s corrupt and illicit activities in Africa to fund war and other exploits have worked to unify Congress and the international community.”

Meeks continued: “As we continue to apply pressure on Putin and his agents for carrying out war crimes throughout this unjustifiable war of aggression, we cannot forget that the Russian Federation will continue to seek avenues through which it can pilfer, manipulate, and exploit resources in parts of Africa to evade sanctions and undermine U.S. interests.”

“The United States not only stands with the people of Ukraine, but with all innocent people who have been victimized by Putin’s mercenaries and agents credibly accused of gross violations of human rights in Africa, including in the Central African Republic and Mali. This bill enlists the resources of the State Department and other federal agencies to examine the Russian Federation’s malign activities in Africa and hold those complicit in these activities to account. The United States will not sit by and watch Putin’s war machine attempt to gain strength to the detriment of fragile states in Africa and elsewhere.”

While the Russians have been involved in some shady operations, many African countries have had long-standing positive ties to Russia and benefitted from its support for African liberation movements during the Cold War—in contrast to the U.S.—including in South Africa.

Meeks’s comments mostly offer a form of projection in that they accuse Russia of trying to exploit Africa’s resources when this is clearly something that the U.S. has done far more extensively and for a much longer period than Russia.

AFRICOM founder Vice Admiral Robert Moeller admitted that one of the U.S. Africa Command (AFRICOM)’s guiding principles was “protecting the free flow of natural resources from Africa to the global market.”

The “Countering Malign Russian Influence Activities in Africa” Act will be used to justify flagrant infringements on the sovereignty of African countries. It attempts to use the Russian bogeyman—like in the Cold War era—as a pretext for neocolonial expansion.

The rhetoric surrounding the bill fits with the larger demonization of Vladimir Putin and Russia, which is a desperate ploy by the U.S. ruling elite to try to mobilize the public against a foreign enemy at a time of growing economic crisis and threatening civil discontent.

When you donate to CovertAction Magazine, you are supporting investigative journalism. Your contributions go directly to supporting the development, production, editing, and dissemination of the Magazine.

CovertAction Magazine does not receive corporate or government sponsorship. Yet, we hold a steadfast commitment to providing compensation for writers, editorial and technical support. Your support helps facilitate this compensation as well as increase the caliber of this work.

Please make a donation by clicking on the donate logo above and enter the amount and your credit or debit card information.