New Calls For A General Strike In The Face Of Coming Climate Catastrophe!

There are no good jobs on a dead planet: Hurricane Maria’s devastating impact on Puerto Rico further underscored the urgent need to confront climate change.

New York,, NY – Shut. It. Down. Amalgamated Transit Union VP Bruce Hamilton, this weekend, urged U.S. trade unionists to “learn from our past” and start building towards a general strike in a last ditch effort to avert climate disaster.

“What we need to understand is that climate struggle is class struggle,” Hamilton told the NY Labor History Association’s Annual Spring Conference at NYU on Saturday. “Workers really do want to engage in radical action with a clear chance of making their lives better.”

Convinced that the market-driven energy sector will never voluntarily make the changes climate scientists insist are necessary to save the planet from overheating — panelists participating in a pair of labor and climate change discussions held over the last few days, instead, called for public ownership and democratic control of the energy sector. 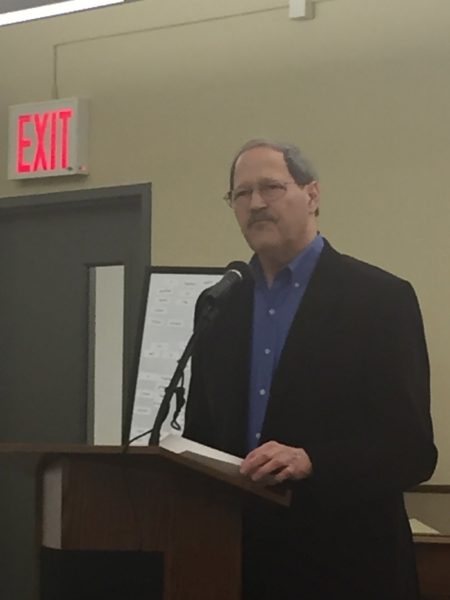 ATU Vice-President Bruce Hamilton talks about the need for a general strike to avert climate disaster.

“A tool that working people have used in the past that has been, at least temporarily successful, is a general strike,” Hamilton told LaborPress. “It’s something we should never take off the table.”

A general strike, however, requires a level of unity around the question of climate change and the Green New Deal that presently does not exist inside organized labor.

U.S. trade unionists and their leadership remain split on Green New Deal legislation from Congress Member Alexandria Ocasio-Cortez  [D-14th District] and Senator Ed Markey [D-MA]  — despite language in the proposed resolution that clearly calls for “high-quality union jobs that pay prevailing wages” and “protecting the right of all workers to organize, unionize, and collectively bargain free of coercion, intimidation, and harassment.”

As Todd Vachon, a sociologist with the Labor Network for Sustainability told the Metro NY Labor Communications Council’s Annual Convention on Friday, when talk of a “just transition” to 100-percent renewable energy arises — many union workers “just want to punch you in the face.” “I’m dragging them behind kicking and screaming,” Erikson said. “Some are better than others.”

“There’s not going to be any good union jobs if we have a dead planet,” Slevin said. “We’re not going to have a place for people to work.”

Since Hurricane Sandy, Slevin said that utility workers have endeavored to “get to the forefront” of changes in the energy sector.

“We’re ready for the next transition to wind and solar,” Slevin continued. “Workers are excited — but we want to make sure we’re a player at the table.”

Jon Forster, co-chair and founder of DC37’s Climate Justice Committee, talked about the need to clarify the meaning of a “just transition” and to build an “exciting vision that people can coalesce around.”

“I think the Green New Deal may be our last best effort [to confront climate catastrophe],” Forster added. 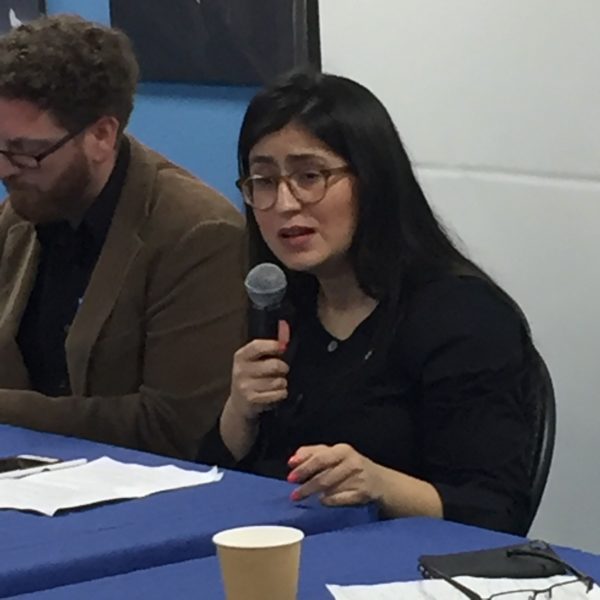 NYS Senator Jessica Ramos, seated next to sociologist Todd Vachon, talks about the need to include black and brown communities in the conversation about climate change actions.

Judy Sheridan-Gonzalez, president of the New York State Nurses Association [NYSNA], also said that Hurricane Sandy pulled her union into the movement to combat climate change, while also decrying the “false dichotomy” that pits good union jobs against the need to shift to 100-percent renewable energy.

“Consistent messages and slogans are important,” she said. “Climate change is a healthcare emergency.”

Irene HongPing Shen, an activist with both the CUNY School of Labor and Urban Studies’ International Program for Labor, Climate and Environment, and Trade Unions for Energy Democracy, said workers are being put into an impossible situation — but that “We can have solutions that embrace workers and workers can be empowered.”

Vachon called the Green New Deal “one of the best organizing opportunities I’ve seen in a long time” and said there has, indeed, been “a shift” in organized labor’s attitude about the resolution.

“Is it a sea change? No. But is it a change? Yes,” he said. “We should [also] look at the mirror and say, what is labor doing? We can organize and push our unions to support a Green New Deal at the local level.”

Sheridan-Gonzalez said pushing new legislation and attending demonstrations will be important, but that it is also “sometimes necessary to have direct action and civil disobedience.”

“Technology in private hands has proven to never be a good thing,” she said. “Public ownership of energy is a necessity.”

The U.S. has a history of general strikes erupting in cities across the country, including Seattle, San Francisco and Minneapolis.

“Show the working class a well-planned way forward and a chance that they can believe in of winning…and you’ll see that supposed ‘conservatism’ [inside organized labor] disappear in a heartbeat,” Hamilton said. “The number one priority of climate change activists and unions should be to affect that change.”