Above: Children Are Not Data from www.WrenchInTheGears.com 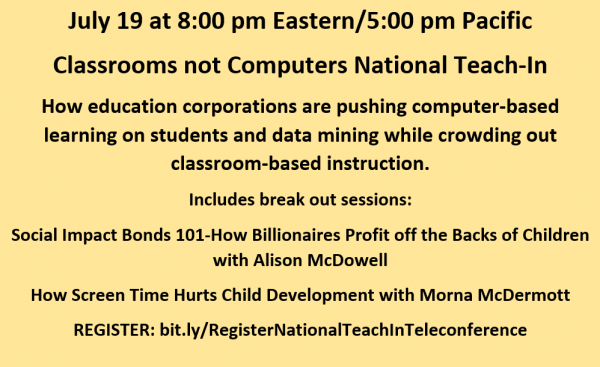 Note: Popular Resistance is supporting a new campaign: Classrooms Not Computers , created by experienced activist-educators who are concerned about the current direction of education. The campaign is focused on the ways computers are being misused in classrooms to collect mass amounts of data on students from a very early age in order to monetize education for private corporate interests.

Monetizing public education has been a decades-long problem. The United States spends more than $620 billion dollars on K-12 education each year, 10 percent from the federal government and the rest from state and local governments. This massive pot of money is one that capitalists see as a major source of income and wealth. The long-term efforts of privatizing public schools through charter schools (which started out as community control of schools but evolved into corporate control of schools) have been one approach. Now there is push back against charter schools and the education profiteers are taking monetizing education a step further — they are collecting massive amounts of data on students which can be sold, used for marketing and used to predict the actions of individual students and an entire generation. Big data collection is also a tool for control.

A movement against false education reform, perhaps better called public education deform, has been a long-term one. It grew exponentially during President Bush’s No Child Left Behind-era. President Obama increased reliance on testing with Race to the Top grants based on test results. Protests against testing to teach and high stakes testing grew rapidly. A movement of parents formed to opt-out of high stakes testing regimes. This was followed by President Obama signing the Every Student Succeeds Act in 2015, which has opened the doors to abusive use of computers to gather data on youth.

The end result of profiteering by big data in education will be the destruction of public education, reduction of the role of teachers and decreasing learning from teachers and peers. This new campaign intends to educate, organize and mobilize people to advocate for Classrooms Not Computers. Sign-up to be part of this campaign here. KZ and MF

During the last few years, a lot of debate has been had over the promise and perils of the Every Student Succeeds Act (ESSA). Many education advocates argued we must embrace ESSA because it promised to reduce the federal chokehold of high stakes standardized testing that was wielded, starting with No Child Left Behind (NCLB) and ramped up further under Race to the Top.

The promise of ESSA seemed too good to be true. Why would the same people who devoted decades to dismantling public schools, creating avenues for de facto segregation, and privatizing a public system suddenly want to turn around and “do the right thing?” ESSA authors (Lamar Alexander) claimed that testing would take a “back seat” And it has. The argument in support of ESSA was “to restore responsibility to state and local leaders [sic] what to do about educational decisions. If a state decides to move away from Common Core, they don’t have to call Washington and ask permission—they can just do it.”

And so many supporters of democratic public education “bought in” to the hype. Exactly what ARE states deciding to do instead? Those are the details we need to examine, and it’s vital (if we are really to reclaim public spaces and democracy) that we understand that there is a global paradigmatic shift occurring beyond the scope of what we already think we know or can anticipate. We must broaden our understanding of the end-game.

In unwritten or loosely defined ways, ESSA ushers in a host of opportunities for corporations and private entities to avail themselves of every child’s most private funds of data. See Emily Talmage. The data surveillance tactics have found their ways into what otherwise might have been meaningful community and classroom practices.

Companies and government agencies still have access to students test scores (via online daily competency-based education data), despite claims of reducing end-of-year testing. ESSA may, in fact, be reducing the role that high stakes testing plays in education policy and practice. But don’t be fooled. It is not because those of us in the opt-out movement “won” the battle. The powers-that-be manufactured that move as a distraction.

The formulators of ESSA have created the illusion that these new policies will be what we want. The opposite is true. The new avenues of data collection formulated for ESSA, in addition to academic (test) data, including social-emotional data, measuring such things a “grit and tenacity.”  They evaluate “mindfulness.” Some might be asking the question “why?”—what is to be gained from this data collection? The answer is: A great deal if you are keeping up with the research. You know this answer– at least in part.

In part, it is because, in the traditional neoliberal framework, any data means money. For example, “Silicon Valley is going all out to own America’s school computer-and-software market, projected to reach $21 billion in sales by 2020.”

Data also means knowing how to anticipate outcomes through predictive analytics, how to sort and track students as future consumers, workers, or prisoners (using third-grade data to build prisons goes back decades). But wait….there’s more. We need to understand what this “more” is, and why high stakes testing (as insidious as it is/was) PALES in comparison to the new data collection mechanisms and forms of data being mined, and the ways in which this data will significantly erode global democracy and human rights. This is because “a mechanism that is at the heart of biocapitalism in its ever-expanding attempts to commodify all aspects of life.” (Haraway).

The capitalist/consumer paradigm is shifting beneath our feet. With the growing capacities of new technologies, such as artificial intelligence and the push for Big Data (McKinsey),  we have seen in the last few decades the development of education policies mirroring something more (i.e. Common Core becomes Competency-Based Education which becomes online learning which means more and more uses for artificial intelligence and tracking student behavior because now the computers must monitor the children once the teachers are all gone)…. See a summary here.

The growing technological advances are slowly forming a new relationship between human and capital. It’s called biocapitalism. And the education policies underway, invited in through the gates of ESSA and other tactics such as social impact bonds, are the way forward for biocapitalism to successfully engender us unto it. Those “innovative assessments” being developed for ESSA are a vehicle by which corporations can build a new biocapital world for all of us. In a biocapital reality, data becomes surveillance becomes total control.

Biocapitalism transforms the interdependent systems of capital and labor (as external phenomena) into a capitalist system that utilizes more abstract form of labor that are internal and intangible. The relationship between man and machine is far more enmeshed in a biocapital relationship.

As this article Harpers from 1997 clearly describes,

“Scratch the surface of information and biotech revolutions ….and what one discovers underneath is a ‘control revolution’….a massive transfer of power from bureaucracies to individuals and corporations. In an unregulated control revolution free markets and consumer choice become even more dominant forces and in virtually every arena social regulation gives way to economic incentive. …even such social intangibles as privacy become commodified.”

To learn more about how biocapitalism controls bodies and minds of children via public education policy read Clayton Pierce –Education in the Age of Biocapitalism: Optimizing educational life for a flat world. Pierce explores how generations of “extractive schooling” (of which standardized testing has been a part since the birth of the eugenics movement in the early 1900’s) and how this has begun to transform itself through “technologies of control” of which the increasing push toward computer learning, machine learning, and artificial intelligence as the mode of education delivery for all children. He concludes, “education life is ever more becoming the target of an expanding range of sophisticated technologies of control (p. 142) … calling for greater and greater degrees of regulation and discipline over the body of the students” (p. 143). This makes me wonder even more about Class Dojo and other uses of privately owned technologies to monitor the student body and mind. And the purpose of them becomes yet more evident.

So as we continue to fight yesterday’s battle, i.e for a reduction in standardized testing and believe that that’s a “win” while also ignoring the profound destruction these other education policies (see McDowell) being quietly floated under our noses are having, the effort to control the next generation (our children) will be complete. We cannot become distracted by a bait-and-switch set of tactics.  Look for the forest, not the trees. We have to see the picture of these corporate reformers is much bigger than most parents and teachers and citizens can even imagine. It explains why global billionaires and tech giants like Bill Gates and Google have such a vested interest in “disrupting” education and taking education over with “21st-century technology.”

Biocapitalism relies on “the use of the relational, emotional and cognitive faculties of human beings.” In a biocapitalist framework of which 21st-century education is a necessary part, “what is exchanged in the labour market is no longer abstract labour (measurable in homogeneous working time), but rather subjectivity itself, in its experiential, relational, creative dimensions. To sum up, what is exchanged is the ‘potentiality’ of the subject. Whereas in the Fordist model it was easy to calculate the value of labour according to the average output and professional skills based on workers’ education and experience, in bio-capitalism the value of labour loses almost any concrete definitional criterion.”

The goal is not merely to sell us all iPads or market education materials and services. The scope is greater than that, and personal data (to be gathered via educational systems sold out to private interests) will use our children’s data not simply to sort and track them by test scores, not simply to close schools in black and brown neighborhoods to profit Wall Street charter schools)….sure all of that is true….but that’s not the end game.

We cannot continue to fight yesterday’s demons and expect to reclaim the rights to our schools, our children’s futures, or our democracy. First, we have to see and understand the nature of biocapitalism as all-encompassing and global phenomena and the clear pathways between the new ESSA assessments and education delivery systems and the mechanisms of control being constructed.  We have to construct systemic avenues of wholesale resistance instead piecemeal compromises. We cannot afford distractions or avoidance.

The devil is in the details.

The devil is in the data.

Morna McDermott is one of the co-founders of the Classrooms Not Computers campaign. McDermott has been in education for more than 25 years and a co-founder of the United Opt-Out movement that challenged high stakes testing.