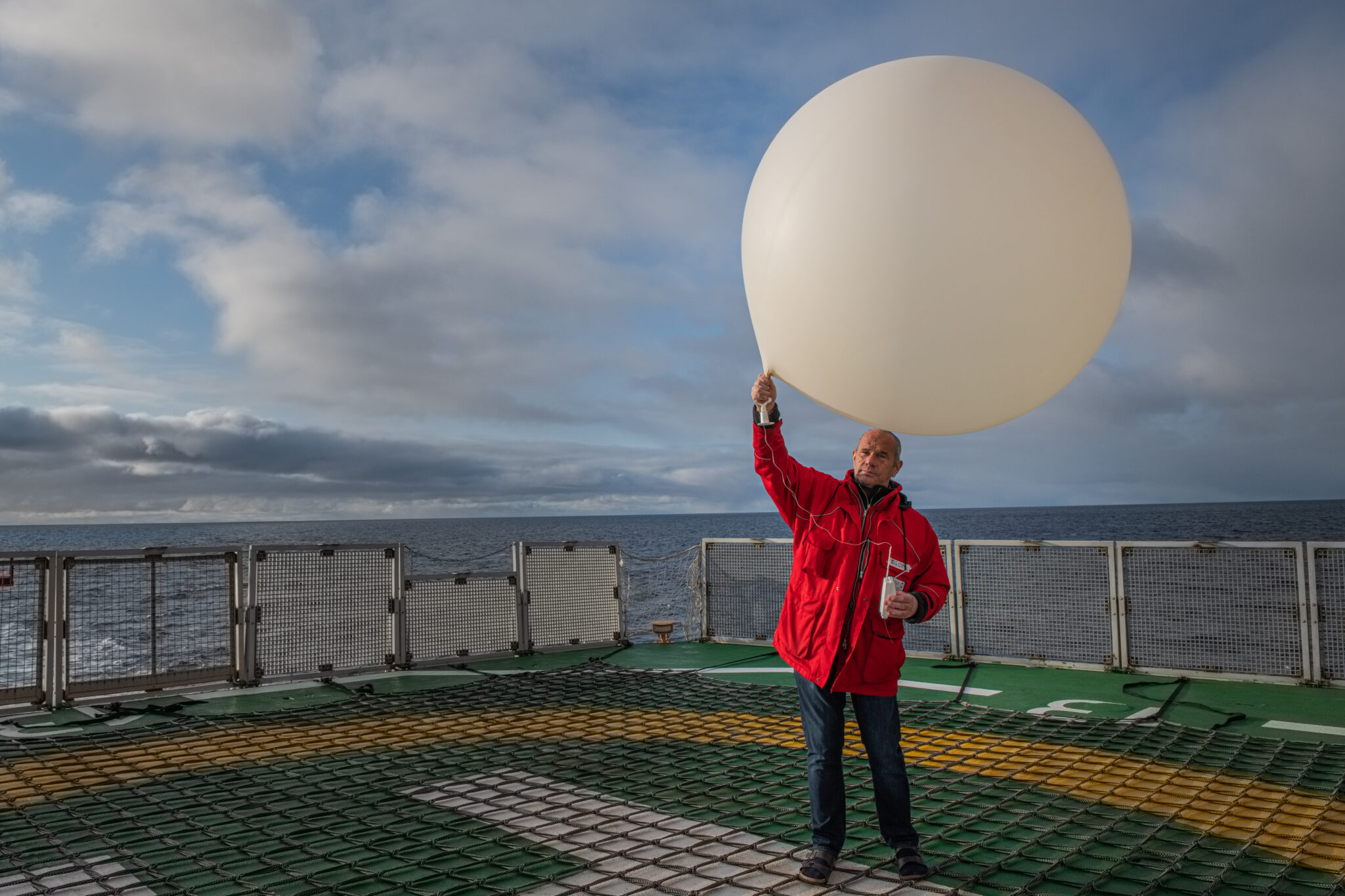 Warming of the surface of the Arctic is matched by a colder polar vortex high in the atmosphere, which is speeding the breakdown of the Earth’s shield against ultraviolet rays.

After sampling the atmosphere above the Arctic for more than a year during the MOSAiC research voyage, climate scientists say the ozone layer, Earth’s protection against intense ultraviolet radiation, is at risk, despite the progress made in protecting atmospheric ozone by the 1987 Montreal Protocol, the global treaty that banned ozone-harming chemicals.

As greenhouse gases heated the surface of the planet, the researchers said, they have also, during the past 50 years, cooled the upper layers of the atmosphere over the Arctic. In the colder stratosphere, long-lived pollutants like chlorofluorocarbons and halons from refrigerants and industrial solvents break down and release chlorine and bromine, which react with sunlight to destroy ozone.

Concentrations of those pollutants in the atmosphere have decreased by about 10 percent since the ban, allowing the ozone layer above Antarctica to heal over the past 20 years, but progressively colder temperatures in the stratosphere above the Arctic are increasing the destruction of ozone in that region.

There are enough of the chemicals remaining in the atmosphere to cause some serious ozone damage, and it will get worse if greenhouse gas concentrations increase and continue cooling the the stratosphere above the Arctic, said Markus Rex, co-author of the research published today in Nature Communications, and leader of the MOSAiC expedition in 2019 and 2020.

“There are plenty of good reasons to quickly and comprehensively reduce greenhouse-gas emissions,” he said. “Now we can add the risk of intensified ozone depletion over the Arctic to the list.”

The measurements from the MOSAiC research “really helps nail down” the region’s declining ozone, he said. “Ozone depletion takes place within the polar vortex. It’s like a pot in which things happen, and you have to be there in the central Arctic in March and April to see them happen. Typically, nobody is in the central Arctic during that season.”

Arctic researchers first started tracking ozone loss in 2005, then recorded colder and colder stratospheric temperatures in 2011, 2016 and again in 2020, with “larger and larger ozone losses,” Rex said. “If we follow one of the higher emissions scenarios, the depletion in the Arctic will overrun the gains made under the Montreal Protocol.”

The research shows how the effects of global warming vary regionally, he said.

“People out there on the street say, ‘ozone layer, that used to be a problem, but scientists and politicians have fixed it, now it’s on the way to recovery,’” he said. “That notion is true for part of the globe, but it may be completely wrong for the Arctic.”

During the MOSAiC expedition, Rex said his team was able to track how about “90 to 95 percent of the ozone in the polar vortex was depleted within a few weeks. It was almost completely gone. That has a very strong impact on ultraviolet radiation levels at the ground, with a substantial increase in very sharp, specific periods.”

Atmospheric scientist Neil Harris of Cranfield University (U.K.), who was not involved in the study, said it presents the best evidence to-date of how global warming will affect the temperature of the stratosphere above the Arctic.

Ozone is a natural gas in the atmosphere, reaching its greatest concentrations in a layer about 12 to 25 miles high. That layer of the gas blocks more than 90 percent of the sun’s ultraviolet radiation, and is most noticeable through its absence, as with the annual ozone hole centered over Antarctica.

The 2019 ozone hole over Antarctica was the smallest on record since measurements started in 1982, according to NOAA, which shows that the ozone layer has recovered slightly and shows improvements since 2000. But in just the last few decades, ozone has decreased at times over the Arctic. Monitoring by the MOSAiC researchers and by NASA showed it reaching a record-low level in 2020. The European Space Agency reported on this year’s “unusual” Arctic ozone hole in April, measuring it at about 400,000 square miles.

Ultraviolet radiation can affect human health, triggering cancer, and also affects domesticated and wild plants by impairing photosynthesis and by reducing the size, productivity and quality in many of the crops that have been studied, including rice, soybeans, winter wheat, cotton and corn.

Too much ultraviolet light can also affect aquatic systems, impairing cellular division in sea urchin eggs, for example. In the Antarctic, the annual ozone hole can cause at least a 6-12 percent reduction in photosynthesis by phytoplankton in surface waters.

The MOSAiC research showed the lowest Arctic polar vortex temperatures and the highest ozone losses on record in 2020, beating the previous records set in 2011. And looking back at the last 50 years shows that the number of days cold enough to trigger ozone destruction have increased by 40 percent, with more increases ahead if greenhouse gas emissions don’t decrease.

That means there’s a race between the slow and steady decline of ozone-harming chemicals, and global warming, which is causing more extreme cold conditions in the polar vortex high in the atmosphere, said co-author Ross Salawitch, with the University of Maryland Department of Atmospheric and Oceanic Science.

“The increasingly cold temperatures create conditions that promote ozone depletion by CFCs,” he said. “So, even though these compounds are slowly going away, Arctic ozone depletion is on the rise as the climate changes.” The extreme cold promotes the formation of high clouds, which provide the right conditions for the chlorine to change form and react with bromine and sunlight to destroy ozone, he explained.

Increasing methane, another climate super-pollutant, may also play a role, the scientists said. In the upper levels of the atmosphere, the potent greenhouse gas increases humidity, which also leads to conditions that promote ozone-destroying chemical reactions.

“This paper is really a wake-up call that something is happening in the atmosphere that’s really important for ozone, and it looks like greenhouse gases are driving it,” said Salawitch, who showed in previous studies that extreme winters in the Arctic are becoming colder.

The data gathered by the MOSAiC research team helps show what will happen in the future. For the study, the research projected ozone loss through 2100 based on past observed trends, projections for temperatures in the stratospheric polar vortex and the expected decline in chlorine and bromine compounds. Nearly all the results showed the polar vortex chilling even more.

And when the projections are combined with the analysis of observed data from the past half century, it confirms that the Arctic is already experiencing a significant trend toward lower stratospheric temperatures and associated increases in ozone losses.

Francesco Cairo, an atmospheric scientist with the Italian National Research Council, said the new research shows that the Arctic polar vortex may more frequently be stronger and colder, “similar to the Antarctic vortex, where cold and isolated air allows the full unfolding of the actions of the ozone depleting substances.”

“This represents a fundamental paradigm shift in our assessment of the future of the Arctic ozone layer,” Rex said. “And the future of the Arctic ozone layer is relevant for life in Europe, North America and Asia. The Arctic polar vortex occasionally drifts south, which can lead to a few days with a reduced ozone layer over populated areas in spring, increasing levels of UV radiation and ultimately a greater risk of sunburn and acquiring skin cancer during these periods.”