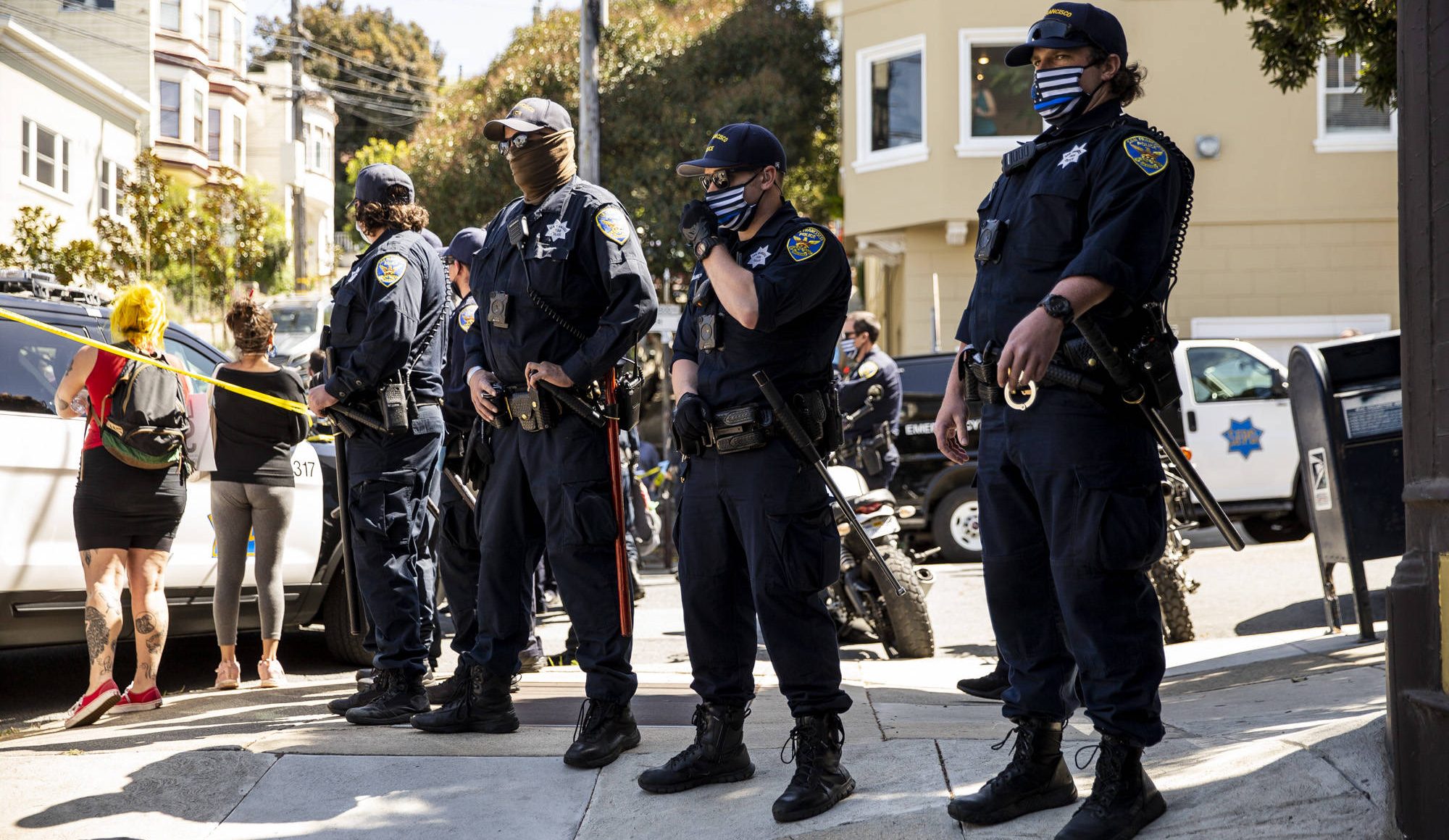 Above photo: Some of the San Francisco Police officers holding the line during a protest Friday are seen wearing face masks depicting the Thin Blue Line flag, which became a symbol for counter protesters during the Black Lives Matter movement that emerged against police shootings in late 2014. Chris Victorio/Special to S.F. Examiner.

NOTE: Colorado is the first state to remove immunity for police who commit civil crimes and make them personally liable for damages. This is a first step in making police accountable for their actions and it is being met with opposition by police. Law Enforcement Today reports it “has received countless messages over the past few days from officers in Colorado.  Many have asked for resources finding police jobs out of Colorado – many others have said they plan on leaving the field altogether. This is just the beginning.  Here’s why.” It blames the new law.

In Atlanta, CNN reports police officers are calling in sick and refusing to leave their precincts in protest over the arrest and prosecution of the two officers who shot unarmed Rayshard Brooks in the back and killed him. And almost three-fourths of police in Washington, DC are considering leaving their jobs because of reforms.

This is very telling. If police are leaving the profession or protesting because they refuse to be held responsible for their actions when they literally hold people’s lives in their hands, then they shouldn’t be in that profession. We wouldn’t allow physicians to have immunity and police shouldn’t either. Let’s hope other states also take this commonsense approach.   – MF

Colorado Governor Jared Polis on Friday signed into law a bill to remove the shield of legal immunity that has long protected police officers from civil suits for on-the-job misconduct, a measure civil libertarians hailed as landmark legislation.

The Colorado state legislature passed the sweeping police accountability bill last week in the wake of nationwide protests over unfair treatment of racial minorities by law enforcement, sparked by the death of an unarmed Black man under the knee of a white Minneapolis policeman last month.

Polis, a first-term Democrat, took the 155th anniversary of Juneteenth, celebrating the abolition of slavery in the United States, to formally enact the law.

The American Civil Liberties Union hailed enactment of the measure, saying Colorado became one of the first states in the nation to strip police officers of a legal defense known as qualified immunity. The ACLU called the police accountability law as a whole historic.

The statute additionally requires police agencies statewide to adopt the use of body-worn cameras by their officers within three years, and bans choke holds by officers in restraining individuals.

Carotid-pressure holds, similar to the technique that Minneapolis police officer Derek Chauvin used when he knelt on the neck of George Floyd in a fatal encounter on May 25, is also outlawed.

The legislation won the support from the state’s police chiefs and county sheriffs’ organizations, which said in a joint written statement that many of the policies contained in the new law are already in place at the local level.

Reporting by Keith Coffman in Denver; Editing by Steve Gorman and Michael Perry.