Above Photo: Doctor Sanjeev Sriram and other supporters gather before Sen. Bernie Sanders, I-Vt., and other democratic Senators arrive for a news conference on Capitol Hill in Washington, Wednesday, Sept. 13, 2017, to unveil their Medicare for All legislation to reform health care. (AP Photo/Andrew Harnik)ASSOCIATED PRESS

We applaud the Democrats for holding hearings on expanding Social Security and Medicare for All. We look to them to do more than hearings though, they need to move legislation to the floor and pass it. We disagree with Nancy Altman’s conclusion. The Democrats have been in power before and have refused to move and pass legislation to solve the many crises we face such as economic insecurity, expanding militarism and the climate. Too often, Democrats say what voters want to hear, but fail to deliver. Let’s push to make these hearings more than empty promises.  – Margaret Flowers

The 116th U.S. Congress is already historic. It reflects the diversity of our country better than any previous Congress, with the highest numbers of women and people of color in history. Nancy Pelosi, the first and only female speaker of the House, has regained her gavel. New members include the first ever Native American Congresswomen, Muslim Congresswomen and the youngest Congresswoman in history.

The fact that the most diverse Congress in history will be prioritizing these issues, which are important to all of us, but especially to women and people of color, is no coincidence. Representation matters.

The hearings will highlight how wise these policies are. They will correct the many lies told to undermine these overwhelmingly popular policies. There has been much fearmongering on these issues, including by Donald Trump himself. Last October, Trump authored an op-ed in USA Today claiming that Medicare for All would harm seniors.

In fact, seniors who are currently enrolled in Medicare would benefit enormously. The cost of prescription drugs for seniors is skyrocketing. Out-of-pocket health care costs are projected to consume half of the average Social Security check by 2033. Medicare for All would eliminate co-pays and deductibles. It would take on Big Pharma and dramatically lower prescription drug costs for the entire nation. No longer would seniors be forced to turn over a huge chunk of their hard-earned Social Security benefits to pharma CEOs and for-profit hospital executives. No longer would seniors have to cut their life-saving medicines in half to afford money for food.

Medicare for All would also improve Medicare’s benefits for seniors. The current program does not cover several essential health care needs, including dental, vision and hearing. This forces too many seniors to suffer avoidable isolation caused by inability to see and hear. It weakens the health of too many seniors who are unable to obtain the dental work necessary to allow adequate nutrition. Improved Medicare for All adds these benefits.

Perhaps the biggest gap in Medicare is its failure to cover long term care. By adding more home health care services that allow people to age at home and institutional care for those who have no other choice, Improved Medicare for All would make an enormous difference in the lives of millions of seniors and their families. It would also benefit every state that covers some of these services under Medicaid.

Public hearings on Improved Medicare for All will make those advantages clear. It will also reveal, despite the fearmongering to the contrary, that Improved Medicare for All will save money. The United States pays around double, as a percentage of GDP, what other industrialized countries spend on health care. Despite this high cost, the United States leaves many uncovered and has worse health care outcomes. Even those who have private insurance wind up finding themselves bankrupted when they face a serious illness or debilitating accident. Despite Medicare covering the most expensive Americans – seniors and people with disabilities – it does so much more efficiently than commercial health insurance.

The facts, which will be revealed at the upcoming hearings, will show how completely affordable an expanded Social Security is. Indeed, as the following graph reveals, Social Security will cost around the same at the end of the century, as a percentage of GDP, as it costs today:

Moreover, as the following graph reveals, that is a smaller percentage than other industrialized countries spend on their old age, survivors, and disability programs today: 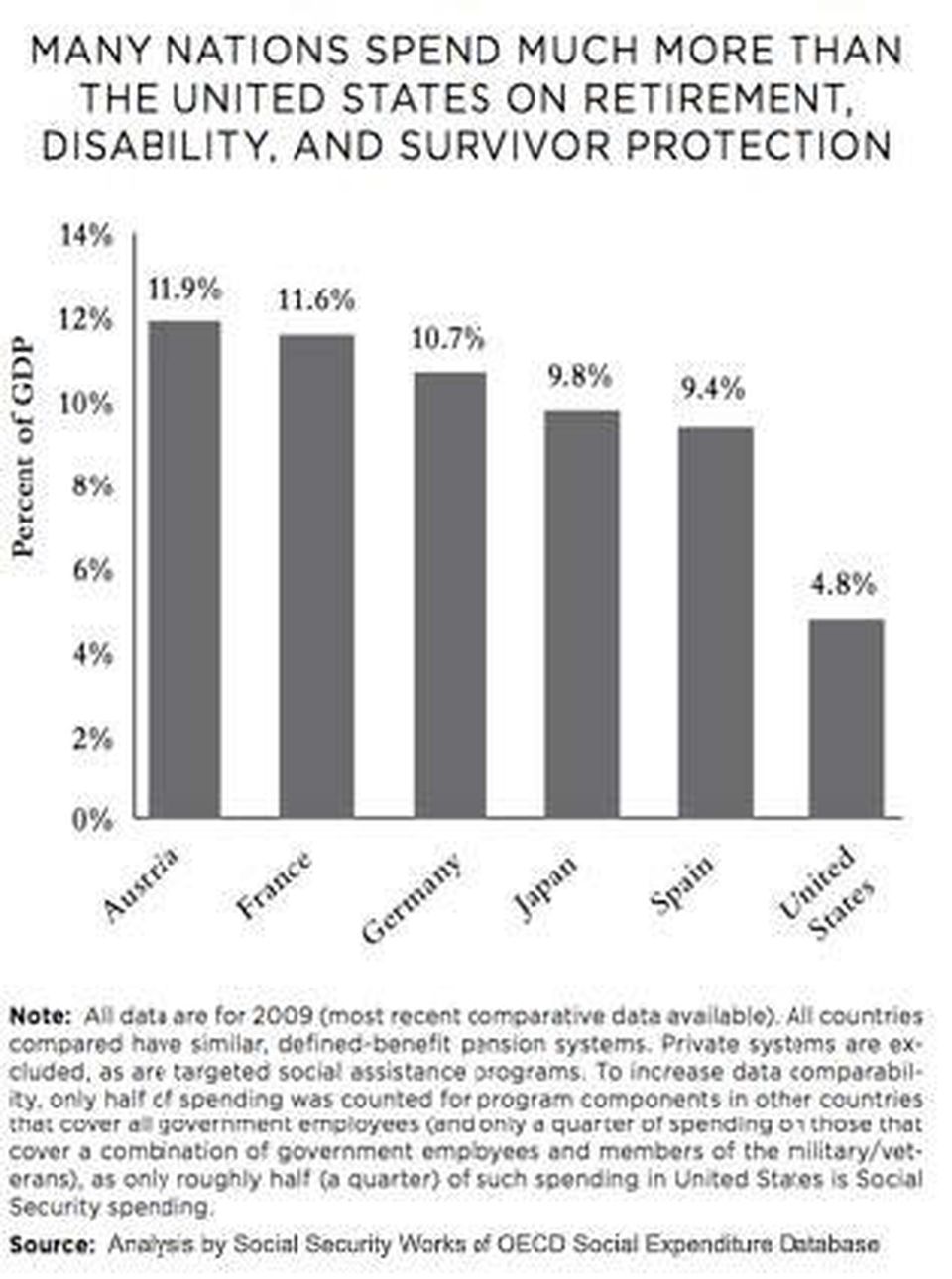 Hearings will demonstrate how affordable expanded Social Security and Improved Medicare for All proposals are. They will show how both proposals are solutions to a number of challenges facing the nation. And they will do much more.

The hearings on both Improved Medicare for All and expanding Social Security will put massive pressure on Congressional Republicans and Donald Trump. Both policies are extremely popular with voters across party lines. Trump won the presidency by claiming that “We’re going to have [health] insurance for everybody” and ” The government’s gonna pay for it.” He also repeatedly bragged about being the only Republican primary candidate who didn’t support cuts to Social Security.

Trump has governed very differently than he campaigned. He was an enthusiastic supporter of the Republican health care repeal bill that would have stripped insurance away from tens of millions of Americans by eliminating the Affordable Care Act, gutting Medicaid and stripping funding from Medicare. Mick Mulvaney, Trump’s choice for budget chief and now chief of staff, wants to cut Social Security and Medicare by any means he can.

The hearings will highlight the wisdom of these policies and expose to sunlight those who oppose them. In those ways, these hearings will bring us a giant step closer toward greater economic security. In the words of President Franklin Roosevelt, when he signed Social Security into law, “If…the House of Representatives in this long and arduous session had done nothing more… the session would be regarded as historic for all time.”