Above photo: People hold up a banner while listening to a news conference outside San Quentin State Prison in California in July 2020 to discuss a COVID-19 outbreak at the facility that sickened more than 1,400 inmates and caused six deaths. Eric Risberg/AP.

The changes in prisons, jails, probation, and parole in the first year of the pandemic.

Newly released data from 2020 show the impact of early-pandemic correctional policy choices and what kind of change is possible under pressure. But the data also show how inadequate, uneven, and unsustained policy changes have been: most have already been reversed.

The Bureau of Justice Statistics (BJS) has released a lot of new data over the past few weeks that help us finally see — both nationally and state-by-state — how policy choices made in the first year of the pandemic impacted correctional populations. Unsurprisingly, the numbers document the tragedy of thousands of lives lost behind bars, and evidence of some of the policy decisions that contributed to the death toll. Drilling down, we also see a (very) few reasons to be hopeful and, for those of us paying close attention, a few notable improvements in what the BJS is able to collect and how they report it. Above all, we see how quickly things can change — for better or for worse — when under pressure, and discuss some of the issues and policy choices these data tell us to watch out for.

A note about the timing of the data

Before we discuss the new data, a brief note about the timing of these data releases: As we approach the third year of the pandemic, it’s frustrating to only now get the official government data from year one — at this point, it’s more useful as documentation of past decisions than as an indicator of current conditions. The lags in BJS data are an ongoing problem made more urgent by the pandemic, and we and other researchers have had to find alternative ways to track what’s been happening to correctional populations, who are at heightened risk of infection and death. Some of the findings we discuss in this briefing will not be not “news” to many of our readers, because we and others were able to find other data sources faster than the BJS could collect, analyze, and publish its data. We include some of our findings from those other sources to lend more context to the numbers reported by BJS, which only cover up to the end of 2020.

Nevertheless, the BJS data updates are a welcome addition to the data we and others have been collecting for the past two years: The agency standardizes and aggregates data from the many disparate and decentralized “justice systems” across 50 states, the federal government, and thousands of counties and cities, year after year, which allows us to identify clear trends over time and key differences across geographies.

Key findings from the BJS reports Prisoners in 2020, Jail Inmates in 2020, and Probation and Parole in the United States, 2020:

It’s not all bad news: A few “silver linings” for women, youth, and others

While most of the significant changes in correctional populations are unlikely to be sustained after — or even during — the pandemic (more on that in the next section), there are a few positive changes that represent possible tipping points or reversals of seemingly intractable problems. With persistent pressure on policymakers, these changes have the potential to stick:

Overall, the “positive trends” in 2020 are nothing to get excited about

In 2020, we did see the kinds of reductions in the number of people under correctional control that we’ll need to see year after year to actually end mass incarceration. And these BJS reports express some of that optimism, with comments like “In 2020, the imprisonment rate was… the lowest since 1992” and “The 15% decrease in persons in state and federal prisons… was the largest single year decrease recorded since… 1926.”

Such dramatic drops in the nation’s use of incarceration would truly be cause for celebration if they weren’t temporary and if they weren’t still “too little, too late” for the thousands of people who got sick or died in a prison or jail ravaged by COVID-19. Unfortunately, there is little reason to think that these drops will be sustained in a post-pandemic world, especially since they have already begun to rebound to pre-pandemic levels, even amid some of the worst outbreaks the U.S. has seen. Above all, we should not expect these trends to hold without sustained reforms, as opposed to temporary “emergency response” changes.

Here, we offer some important context for the trends observed in 2020: 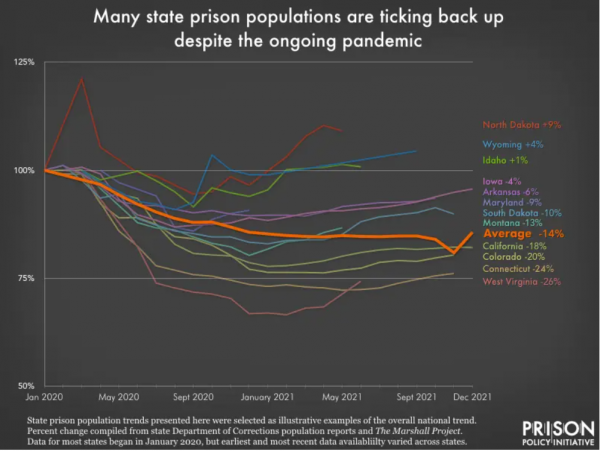 Beyond adding context to some of what would otherwise appear to be “positive trends,” our analysis of the 2020 BJS data surfaced some deeply troubling findings about deaths in prison and on community supervision, the failure of states to release more people during the pandemic, and jail policy choices that reveal backwards priorities.

In prisons, BJS reports several disturbing changes from pre-pandemic 2019 to the end of 2020:

As in previous years, there is a lot of data missing about what happens to people on probation and parole; in many states, BJS reports little about how many people complete supervision successfully, how many are returned to jail or prison, why they are returned, etc. But in 2020, one dismal trend was clear: Many so-called “exits” from probation and parole were actually deaths:

Far more people should have been released from prisons — not far fewer.

Getting state-by-state data, such as the BJS made available in the reports on prisons and on probation and parole populations in 2020, is key to bringing some important facts to light that would otherwise be obscured by the larger, nationwide trends. The state-specific data reported by BJS revealed that some states seemed to largely ignore the urgency and seriousness of the pandemic’s impact on correctional populations:

Finally, while BJS has not yet released data about deaths in jails in 2020, the jail data suggests some truly confounding policy choices at the local level that year:

The recent data reported by BJS about prison, jail, probation, and parole populations during the first year of the pandemic drive home just how quickly things can change under pressure. By and large, the changes we saw during 2020 were temporary, but they suggest how much is politically and practically feasible when there is a critical mass of support to save lives put at risk by mass incarceration. It’s encouraging to see rapid population drops of 15-25% in prisons and jails, to see the total “footprint” of the carceral system shrink by over 10% in one year, and to see that, when pressed, states and counties can find ways to function without so much reliance on correctional control. It’s also helpful to see the weaknesses in such decision-making, which are put into sharp relief when under the same pressure: Racial equity is too often an afterthought in decarceration efforts, and local-level authorities, in particular, too often lack alternatives to incarceration for low-level offenses and supervision violations, and are too quick to lock up people accused, but not convicted, of crimes. There are many lessons for policymakers and advocates for reform in the data from 2020.

At the same time, the fact that many positive early-pandemic policy changes were so short-lived is disheartening. After all, the pandemic rages on two years later, and correctional populations continue to climb back up — what has changed? For one thing, the narrative has changed: The perception (not a reality) that criminal justice reforms have led to upticks in crime over the past few years has fueled pushback against smart policy changes. That perception is powerful, and history shows that reactionary policies can follow: In the 1980s and 1990s, the last time prison and jail populations were as low as they were in 2020, the knee-jerk reaction to (much bigger) increases in crime was to lock more people up, and for longer. There’s a lesson in that for us, too.

Ultimately, centering the facts in our ongoing discussions about safety and justice — and grounding them with context — will be key to sustaining support for any progress toward ending mass incarceration. Towards that end, the recent data from BJS summarized here about changes during 2020 are essential resources.