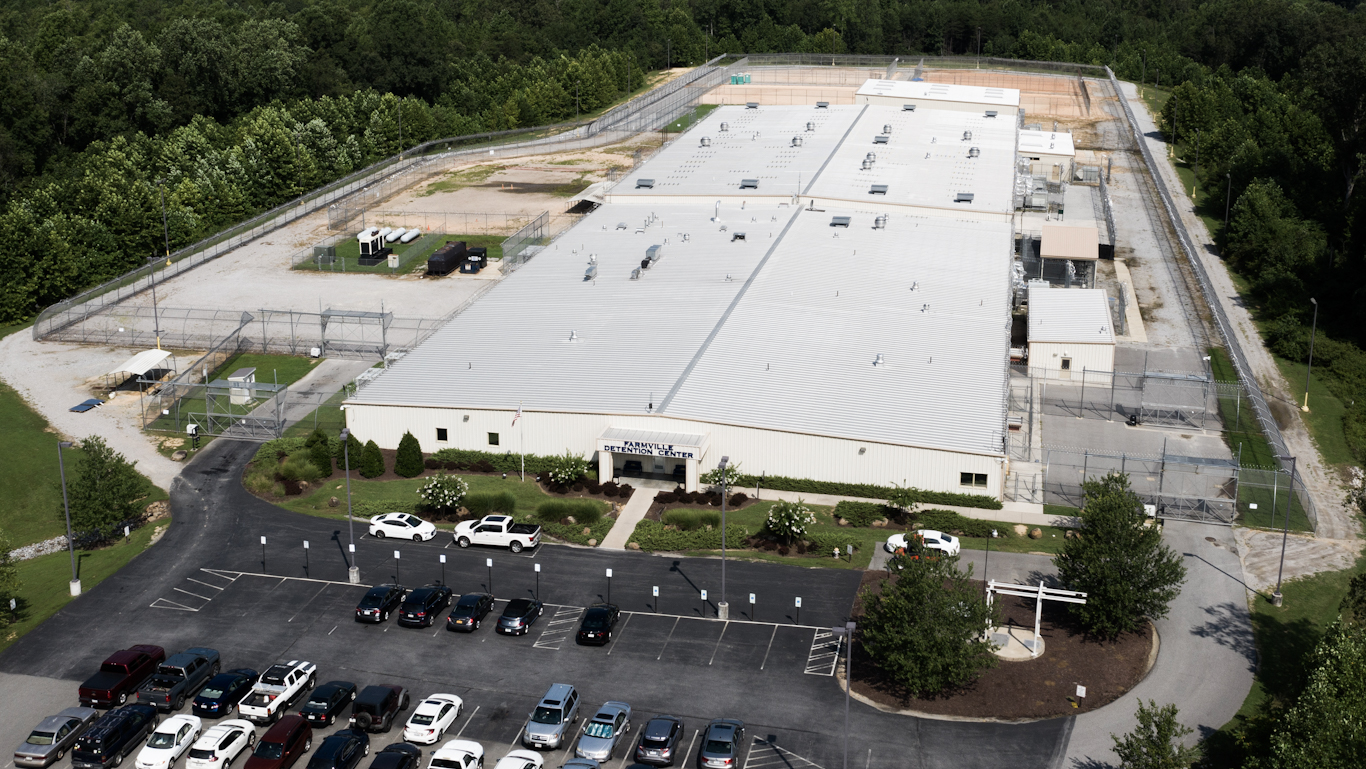 So Bad That Even ICE Was Shocked.

Documents obtained through Freedom of Information requests show a consistent pattern of abuse at the privately-run ICE facility in Farmville, where detainees suffered abuse, neglect, and threats of retaliation if they complained.

New documents shed light on what activists are calling “a dark pattern of abuse” at a privately-run, for-profit prison in Virginia used by Immigrations and Customs Enforcement (ICE). Obtained by the civil rights group the Advancement Project under the Freedom of Information Act, the documents describe a long pattern of abuse, neglect and mismanagement of detainees at Immigration Centers of America (ICA) Farmville — a facility where almost everyone has coronavirus.

In 2015, for instance, one detainee was pepper sprayed in the face while in full restraints. He was then stripped naked, shackled from the ankles and wrists and pepper sprayed again, then left tied to a bed for two days. In later proceedings, the prison attempted to argue that the man was a “threat” to staff because he was “unresponsive” to their commands after being sprayed, despite the fact that he was lying prone in a padded cell while in full restraints. This justification was not accepted by the ICE disciplinary report, which found ICA was in violation of several standards.

Another incident of liberal use of pepper spray two years later was also highlighted in the documents. Guards pepper sprayed a crowd of detainees, later claiming that they were defying orders. However, video evidence shows the opposite. As ICE noted in a review, “all detainees appear[ed] to be complying with verbal commands and returning to their bunks.”

Hundreds of detainees have also been subject to food unfit for human consumption. In 2015, for instance, some complained after finding a number of white worms in their meals. ICA Farmville retaliated by threatening them with “severe” and “swift” consequences if they continued in actions that “degraded the reputation” of the facility, including threatening them that any complaints would negatively impact their immigration cases. ICA Farmville’s treatment of those in its custody was so poor that it appears to have shocked even ICE, not an organization known for its rigid defense of human rights; the documents showing that they considered ICA Farmville’s actions “chilling” and “beyond the pale.”

Those familiar with the prison were shocked, but not surprised by the findings. Electra Bolotas from LaColectiVA, a grassroots social justice organization in Virginia told MintPress that,

We have been working on issues in ICA Farmville since 2017, so the documents just confirmed what we already knew was happening inside, including abuses of migrants who are detained there, retaliation of the guards with pepper spray, food that is not fit for eating and medical neglect. The FOIA documents solidify the reputation of Immigration Centers for America, the private prison company that runs the detention facility in Farmville, as a company that profits from harm and abuse of migrant people.”

Madhvi Venkatraman, an organizer with Sanctuary DMV, a volunteer group helping immigrants in the Washington, D.C. area, said that “These newly revealed incidents also speak to the overall cruelty of migrant detention. We must free them all and work to defund ICE and Customs and Border Protection before we lose more people to this racist system.” MintPress also contacted ICE and ICA Farmville for comment but has not received a response as of publication.

The documents come amid a rampant coronavirus outbreak at the prison. With 247 currently infected, nearly 90 percent of the prison population at ICA has tested positive for COVID-19, accounting for around a quarter of all current detainee positive cases across the entire nationwide ICE prison network. In April, MintPress reported on a hunger strike involving around 100 detainees at Farmville who were demanding their release on medical and humane grounds, fearing an outbreak. The strike was broken after threats of retaliation, including solitary confinement, but those protesting have been vindicated, their fears realized. Bolotas said that throughout ICA’s history there has been a “pattern” of abuse:

Whenever anybody inside speaks up about the conditions they are met with retaliation and threats to their immigration proceedings and their immigration cases. ICA is really careful about its brand image because it is trying to build more detention centers, especially in places where local economies have been depressed. So they sell themselves [incorrectly] as a company with humane conditions.”

Even as the country went into lockdown and the government was advising people not to travel, ICE was transferring detainees from Arizona and Florida to Farmville, resulting in an explosion in the number of cases. It was also deporting coronavirus-positive immigrants back to their home countries, overwhelming their response systems. The Minister for Health for Guatemala, for example, noted that 75 percent of deportees on one flight arrived with COVID-19.

Losmin Jiménez, project director and senior attorney for the Immigrant Justice Project, told MintPress that she was not surprised by the coronavirus outbreak at Farmville.

Medical neglect is the norm in immigration detention so when the COVID-19 was declared a global pandemic by the World Health Organization, we knew it would spread rapidly inside jails, prisons and immigration detention centers. We knew that time was of the essence and that releasing people would be critical. Social distancing [and] basic hygiene is impossible inside cages.”

The medical situation recently claimed the life of one detainee at the prison. James Hill, a 72-year-old Canadian died earlier this month after a lengthy battle with the virus. He was scheduled to be deported to Canada on July 9, but three days before his flight, he was hospitalized with COVID-19 symptoms. Hill’s death and the coronavirus epidemic at ICA Farmville were foreshadowed last summer by a bad outbreak of mumps, a classic disease of overcrowding, and poor sanitation. Authorities’ overbearing response to the situation sparked a “meal strike” from detainees. Their protest was crushed by guards, and leaders were put in solitary confinement. Inmates sued ICE for their treatment. The newly released documents also note that one detainee who took to cleaning the floor of his cell himself in 2015 was handcuffed and held in a restraint bed for four days afterward. “Clearly, ICA Farmville is no place for anyone to be,” said Jiménez.

ICA opened its Farmville facility in 2008, sparking protests from some locals. There is less opposition from local authorities however, the town of Farmville pockets around $20,000 per month in what the National Immigrant Justice Center has called a huge “kickback scheme.” In 2019, the company also applied to open a new prison in Dwight, Illinois, but amid the mumps outbreak and meal strike, Illinois Governor J.B. Pritzker signed a bill banning private immigrant detention centers. “Illinois is and always will be a welcoming state,” the governor said. “Let me be perfectly clear: the state of Illinois stands as a firewall against Donald Trump’s attacks on our immigrant communities.

Invoices show that ICA charges ICE at least $120 per person, per day, a sum around the same as a king room at the Hilton Richmond downtown or a five bedroom townhouse in historic city center costs. Per month, the company is paid around $2.3 million on average. Jesse Franzblau, a Senior Policy Analyst with the National Immigrant Justice Center, told MintPress that,

ICE and ICA have subjected people to violent force by guards as they suffer the worst COVID-19 outbreak. Newly obtained records provide undeniable evidence of what people inside have been saying for years, and illustrate a years-long history of abuse that foreshadowed today’s tragedy. The ICE contracting system builds in an inhumane profit-driven incentive to keep people locked in detention. All the while, ICA is pursuing contracts to try to expand ICE detention to new regions, with no accountability for past and ongoing atrocities.”

For profit, private prisons are a growing phenomenon in the United States. Since 2000, the number of people incarcerated in private facilities has increased by 39.3 percent, compared to an overall rise in the prison population of 7.8 percent. Some states have seen the practice explode. Arizona’s private prison population, for example, has grown nearly sixfold over the last 20 years, although Virginia’s has stayed relatively stable.

Although they want conditions to improve for the hundreds of detainees, ultimately, many are looking to close the facility and to abolish ICE altogether. Polls show that around a quarter of Americans favor scrapping the agency. Bolotas was clear that the practice of incarcerating undocumented immigrants should end. “There is no humane way to incarcerate or detain somebody brought here and held against their will, waiting for immigration proceedings, trapped in bureaucracy. During that time their life is being taken away from them,” she said.