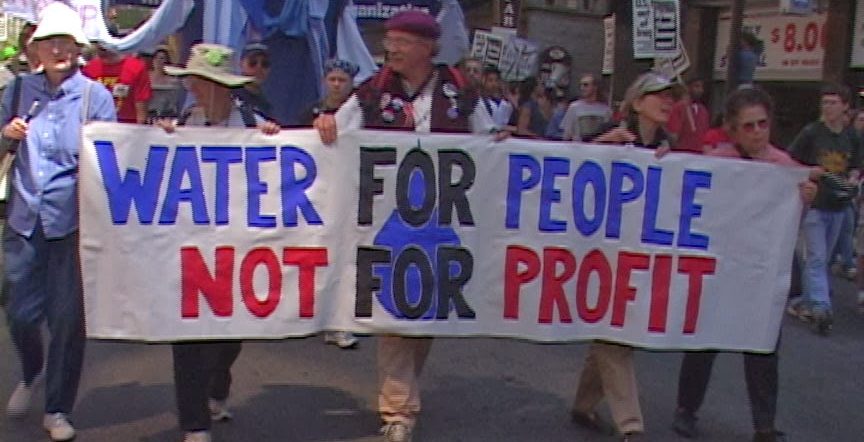 As Nestlé prepares to sell off its bottled water brands, Michiganders join communities across North America demanding the return of their local water sources.

Evart is taking center stage in North America’s “water wars” as local advocates demand that Nestlé Waters North America revert its claimed rights to the White Pine Springs back to the public trust. These springs, a source for Ice Mountain’s bottled water brand, have long been subject to community opposition due to the company’s legacy of broken promises, ecological harm, and removal of our most precious public resource: our water.

Nestlé Waters’ announcement last summer that it is considering the sale of its bulk bottled water business — including regional name brands Pure Life, Poland Spring, Arrowhead, Zephyrhills, and Ice Mountain — follows a string of controversies over the company’s environmental and community impacts in the U.S. and Canada that have spurred protests, lawsuits, and legislative proposals. Indeed, Nestlé CEO Mark Schneider admitted to the New York Times in June that ‘environmental concerns’ had hurt sales. Recent developments suggest the company is in the process of accelerating the sale to the tune of $5 billion.

Now, more than a dozen organizations in the United States, Canada and Switzerland, led by grassroots groups in communities that have been fighting Nestlé’s water extraction for years, have written to Nestlé CEO Ulf Mark Schneider to demand that the company return a series of particularly controversial water bottling operations to the public prior to any sale.

The case in White Pine Springs is notable since Nestlé is currently applying to increase its water withdrawals to four hundred gallons per minute despite the company’s intent to sell its Ice Mountain brand. While a final permitting decision rests with the state’s environmental regulator, EGLE, the move is bitterly opposed by local residents.

The State has always relied solely on Nestle generated data to claim there has been no harm to local streams and lakes. Residents know better and have documented harms for many years. With record high water levels throughout the state, the two affected Creeks in Evart are way below the level to support a once healthy trout population and mudflats are increasing. The damage is similar to what was experienced in Mecosta County when Nestle began pumping there. A lawsuit filed in 2000 resulted in a court precedent that forced Nestle to reduce pumping. Yet they have been fighting tooth and nail to get a permit for the exact same amount in Evart. To date the State still takes Nestle’s position and refuses to investigate the claims of the citizens affected.

The letter marks the launch of a global campaign — Nestlé’s Troubled Waters — to pressure the company, potential buyers, regulators and lawmakers to see the ownership of these water sources revert to public ownership.

• In the letter, local advocates join groups from the US, Canada and Switzerland in calling on the world’s largest water bottler to divest itself of Evart’s White Pine Springs as well as other controversial water sources in Colorado; Florida, California and Ontario, Canada, prior to any sale.
• Nestlé’s decision about a sale comes at a time when record wildfires, long-term drought conditions and the coronavirus pandemic are elevating the importance of access to clean, affordable local water sources.
• Nestlé’s practices have previously led to legislative proposals in Ontario, Michigan and Washington to restrict privatized water bottling.

The letter precedes several important permit-related developments for Nestlé, which despite its sale effort is moving ahead on permit renewals in multiple states:

• A hearing this week before Chaffee County, Colorado Commissioners over Nestlé’s request for a 10-year extension of its permit to draw water from Ruby Mountain Springs, despite significant public concern over a series of unfulfilled promises from the company’s first, now expired, permit;
• In Florida, the Suwannee Water Management District will soon review Nestlé’s effort to increase its water take from Ginnie Springs to almost 1 million gallons per day, though Nestlé’s name is not on the permit application — it buys water from the permittee — despite threatening the flow of the endangered Santa Fe River’s iconic freshwater springs.
• In California, the state continues to await a final Report of Investigation from the State Water Resources Control Board regarding its review of Nestlé’s shaky claim to water rights in the San Bernardino National Forest. The preliminary report found Nestlé had far overstated its rights for years.