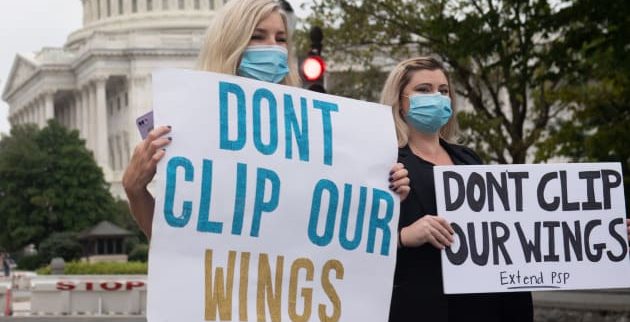 Above photo: Flight attendants, airline pilots and other aviation workers hold a protest organized by the Association of Flight Attendants urging the US Congress to pass a Covid-19 relief package and extend the Paycheck Support Program to save aviation jobs during a rally outside the US Capitol in Washington, DC, on September 9, 2020. Saul Loeb | AFP | Getty Images.

NOTE: This article is from the corporate media, so it’s important to understand that bias. For one thing, the article cites an unemployment figure of 7.9% and says it fell “due to a sharp decline in labor force participation.” What this means is that people have stopped looking for jobs and so they are not counted in the unemployment figures. It also doesn’t consider people who are working part time who would like to work full time. Overall, this article points out that the economy is still weak and more businesses may shut down. The economy is expected to worsen unless Congress steps in and provides support to people and small and medium businesses to get them through this time.  -MF

Weaker-than-expected job growth in September sent a signal that the sharp economic recovery off the coronavirus shutdown may be hitting a wall.

The Labor Department reported Friday that nonfarm payrolls increased by 661,000 in September, held back by declines in government employment and an exodus of workers from the labor force.

In normal times, that type of hiring pace would be considered a sign of a robust job market. The total, in fact, would have been the best month the U.S. had seen since 1983 – if these were normal times and not amid the Covid-19 era that has changed the benchmarks by which economic data is measured.

As it stood, the total was a fairly wide miss from Wall Street’s expectation of 800,000. The unemployment rate fell more than expected to 7.9%, but that was mostly due to a sharp decline in labor force participation.

Taken together, the report is a potential early flare from the business community that a rebound during which 11 million jobs were refilled in four months could be petering out.

“This report is an illusion of progress at a time when we needed accelerating gains in the labor market. The number of jobs added this month is just not enough,” said Nick Bunker, economic research director at job placement site Indeed. “This report is massively concerning. We are not where we need to be, nor are we moving fast enough in the right direction as we head into fall.”

Data has looked good, but …

The timing of the report is inauspicious in that most of the backward-looking economic indicators have been solid.

Housing stands out the most as the residential market is struggling to find supply to meet all the demand. Retail sales have been solid, and manufacturing is back into expansion after heading in the wrong direction for a few months.

The Citi Economic Surprise Index, which measures the data versus Wall Street expectations, has cooled since soaring to its historic peak in mid-July but still is above anything before the pandemic.

Most tellingly, consumer confidence remains strong. But that may not last, particularly if the jobs numbers weaken and the stock market continues to struggle.

“The real question in my mind is why consumers are so upbeat and why they remain upbeat. Until I can answer that, I don’t know how persistent the expansion is going to be,” said Drew Matus, chief market strategist at MetLife Investment Management. “People are underestimating how long the impact of what we’ve been through is going to last. In that regard, there’s some downside risk to the outlook.”

At the moment, the economy remains mostly in a rally mode off the unprecedented slump in the second quarter brought on by the coronavirus-induced shutdown. GDP is projected to increase by as much as a 32% annualized pace in the second quarter after tumbling 31.4% in Q2 and 5% to start the year.

The trick will be keeping that momentum going, particularly if the virus spreads and results in more hospitalizations and an accelerating death toll, which already has exceeded 200,000.

“For activity to rise after essentially shutting down for two months was never going to be too tough. Now is when additional positive economic surprises become harder to come by,” said Seema Shah, chief strategist at Principal Global Investors. Shah sees the sledding getting tougher for businesses as the year goes on, particularly with warring factions in Washington unable to come up with more fiscal stimulus.

“Economic scarring is likely to become more apparent in Q4 as more companies finally start to throw in the towel, reporting closures and job cuts,” she said. Without additional aid, “the struggles will become more widespread and evident.”

A question of survival

Companies increasingly are indicating that they may not survive without persistent growth and additional aid. About one-third of small- and mid-size businesses indicated to PNC that they would close in a year or less absent a change in conditions, said Gus Faucher, the bank’s chief economist.

“The low-hanging fruit has been picked, and the job market recovery will slow further going forward,” Faucher added in a note. “A surge in coronavirus cases in late 2020 could lead to further business closures. An inability to pass additional fiscal stimulus — including aid to households, small and mid-size businesses, and state and local governments — is another downside risk.”

Whether the disturbing economic omens impact the financial markets likely will depend on the path of the virus and the stimulus talks.

Wall Street appeared like it might shake off the letdown as well as news that President Donald Trump has the coronavirus. The Dow Jones Industrial Average recovered most of its early day losses Friday, a sign perhaps that investors remain hopeful that the recovery can continue despite the jobs news.

To be sure, there were a few positives out of the Labor Department report, among them being that private sector job creation of 877,000 – the net nonfarm figure included a loss in government jobs – was only a touch off the 913,000 FactSet consensus.

Still, lacking a boost from Capitol Hill and some better economic news, the market could face a tough road ahead.

“You would think that [the report] would put some incentive into the talks to get something done for more fiscal relief for people who are unemployed, particularly in some of the hard-hit sectors like airlines, transportation, hotels, etc.,” said Kathy Jones, head of fixed income for Charles Schwab. “This seems to be confirmation that the pace of recovery is headed into a new phase. Most of us anticipated that we’d get a little more help from the fiscal side to get us into next year.”