The Center for Constitutional Rights will announce a significant new filing challenging the  Guantánamo prison under President Trump on the morning of January 11. You can watch the livestream of the press conference beginning at 9:30 a.m., see Facebook page.

January 11 marks the 16th anniversary of the opening of the prison at Guantánamo, and the first anniversary under this president. If you’re in the D.C. area, please join us at 11:30 a.m. to gather  with human rights activists, torture survivors, Guantánamo attorneys, 9/11 family members, and members of diverse faith communities at Lafayette Square, at the north side of the White House. Together, we will rally to end indefinite detention, close the prison, and stop torture.

We’re also excited to announce the book launch of There is a Man Under that Hood, which sets the words of Luke Nephew’s (Peace Poets) remarkable poem to photographs of anti-torture demonstrations taken or curated by Justin Norman (Witness Against Torture). The afterword is written by CCR Senior Staff Attorney Omar Farah. You can attend the D.C. book launch on January 10 and also pre-order the book online! 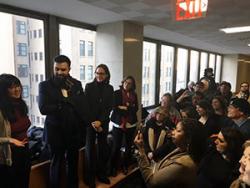 Last Wednesday, Fordham students denied permission by their university to start a Students for Justice in Palestine (SJP) club argued their case before a Manhattan judge. The students, represented by CCR, Palestine Legal, and cooperating counsel Alan Levine first filed suit in April. Fordham’s decision to fight the lawsuit rather than correct course suggests it is entrenched in its censorship of Palestine advocacy on campus.

We argued that the Fordham administration’s veto of the student government’s approval of SJP was arbitrary and capricious, violating its own policies guaranteeing free expression and relying on unfounded justifications. Fordham attempted to justify its decision by asserting that the purpose of SJP, which is to promote justice and human rights for Palestinians, leads to polarization, and because of reports that some separate SJP groups on other campuses have engaged in disruptive activities, without regard for whether those reports were accurate, or the fact that SJP groups operate independently. Fordham disregarded evidence that countered university officials’ stated concerns about SJP, instead basing its decision on materials from individuals hostile to SJP’s views.

“The judge had many thoughtful questions for Fordham,” said CCR Deputy Legal Director Maria LaHood. “The university’s full-throated defense of its ban of Students for Justice in Palestine not only violates its commitment to free expression, but also flies in the face of the Jesuit university tradition of engaging with profound ideas and fighting for justice. Fordham should do what’s right and recognize Students for Justice in Palestine.”

More than 100 people came to the hearing to support the students.  You can read a great media report here and see our client Ahmad Awad and attorney Dima Khalidi of Palestine Legal discussing the case on Democracy Now!.  You can also watch a debrief by the attorneys and students that aired on Facebook Live right after the hearing.

The fight continues in Louisiana 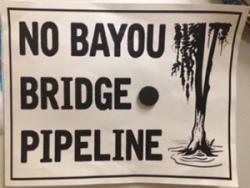 Last Wednesday was a busy day for CCR. We also took a Louisiana sheriff to court seeking an order for the St. Charles Parish Sheriff’s Office (SCPSO) and Sheriff Greg Champagne to release public records related to the law enforcement response to protests against the Dakota Access Pipeline (DAPL) in North Dakota, as well as communications with companies involved in the proposed Bayou Bridge Pipeline (BBP) in Louisiana. The sheriff’s office has refused to release documents under Louisiana’s public records law and went so far as to accuse CCR and those opposing the BBP of being involved in a conspiracy and of harassing the sheriff’s office by seeking the release of documents.

In his legal response to the request for public records filed with the court, the sheriff calls the request unethical, potentially criminal, “politically charged allegations designed only to incite a ‘newsworthy’ reaction and generate donations,” “political propaganda,” “designed to insult and harass this Parish’s Sheriff,” filed “to advance a particular political agenda and to harass,” containing “scurrilous allegations and irrelevant harassing political propaganda presented by the Center for Constitutional Rights in this litigation.”

You can read CCR’s reply to SCPSO’s refusal to release records here and learn more on our case page.

“Our request is a simple, straightforward public records request about a matter of public interest,” said CCR Senior Staff Attorney Pamela Spees, who grew up in Lake Charles, Louisiana, one of the communities that would be affected by the BBP. “That the sheriff’s office is fighting back so hard, and with such vitriol, is very troubling.”

The judge ruled in favor of the sheriff, but we’re just getting started. We will appeal, and we will get to the bottom of this!