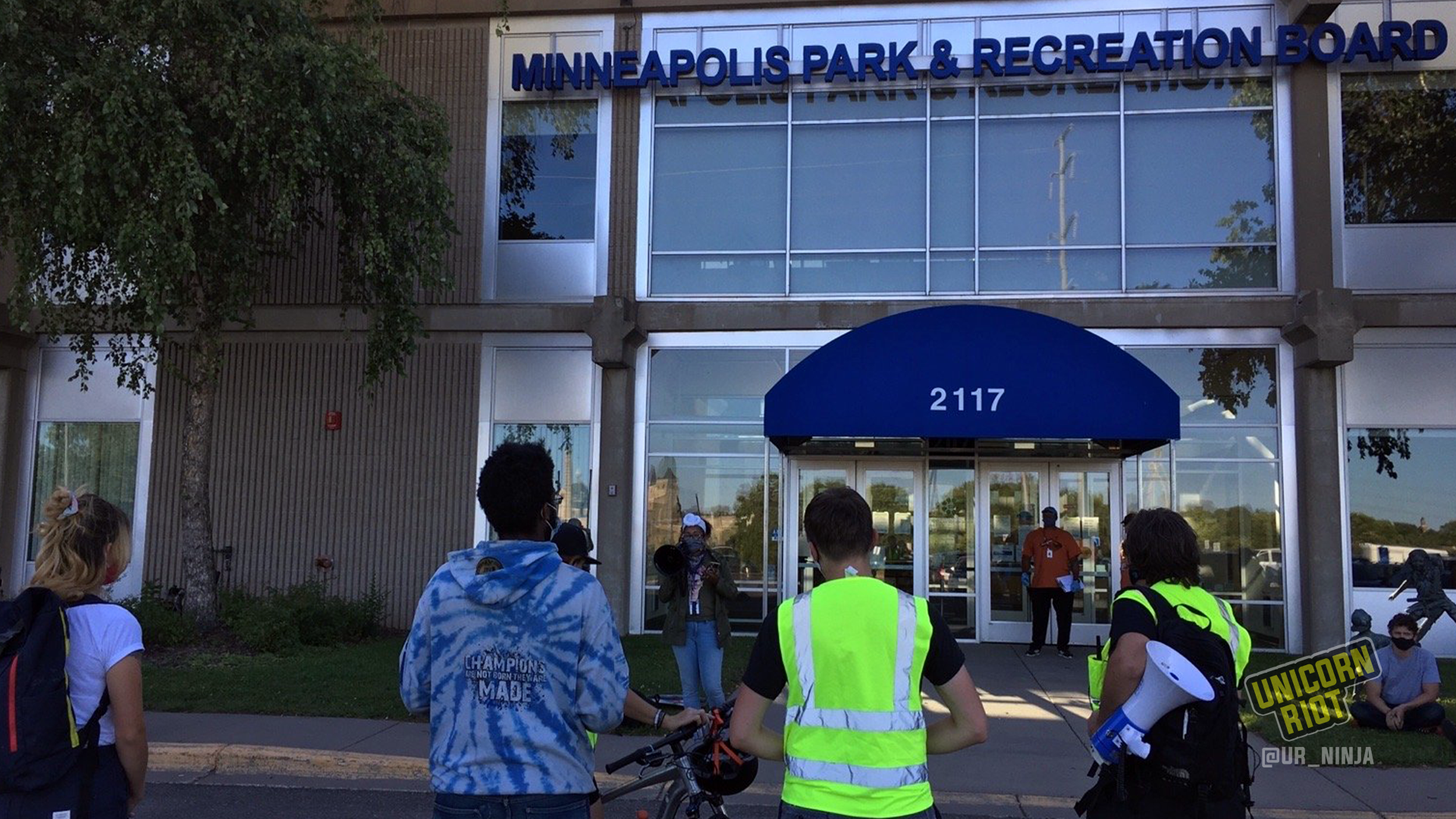 Minneapolis, MN – Advocates for people without housing are meeting today outside of the Minneapolis Park and Recreation Board headquarters, hours after a sanctuary encampment in the Phillips area was cleared by police. They’re demanding immediate sanctuary for the Safe Haven Encampment (SHE), a sanctuary camp for women and children, along with “any other park who is asking for a consideration to exist.“

Two weeks ago, community members demanded that the Minneapolis Park & Recreation Board (MPRB) amend Resolution 2020-267 to guarantee no evictions. This and four other demands were delivered to Board Superintendent Al Bangoura’s residence overlooking the Lyndale Farmstead Park.

Advocates for unhoused people say that the Parks Board resolution “criminalized homelessness” by adding provisions regarding keeping unhoused people away from schoolchildren.

Unicorn Riot covered “Justice for Safe Haven Encampment (SHE)” from the gathering on North River Road.

The #Minneapolis Parks & Recreation Board is currently hearing from members of the community about the city’s sanctuary #homeless encampments.

After the camp eviction today, unhoused people and community members began to reclaim the ”Wall of Forgotten Natives” along Hiawatha Avenue. The Minnesota State Patrol put up fencing to prevent free movement, visible in live video captured by local independent photojournalists KingDemetrius Pendleton and Louis Tran, who were live from the scene.

Unicorn Riot reported last month on longtime Native organizer Mike Forcia’s facing prosecution regarding the toppling of the Columbus statue at the Minnesota State Capitol complex. Today Forcia told reporter Sam Richards about the goals involved in setting up the space, pointing out that it’s based on a tiny piece of Dakota land:

Mike Forcia explains what happened at the encampment bordering Hiawatha. "If they can't give us money, resources, at least show us compassion. This is Dakota territory." Explains that the encampment needs food, water, PPE, etc. pic.twitter.com/PRBXhYGuWh

Community members have demanded all sanctuary encampments be permitted to exist “in a park that best fits the equitable needs of those residents for proximity to services, transportation, away from harm, etc, and to remove harmful language from their previous resolution that made being unhoused criminal.”

The event page noted that many women at SHE are there because their previous residence had been bulldozed.

After speaking earlier to board members during the meeting’s public remarks section, community members waited for hours outside of the Parks and Recreation Board headquarters to hear whether or not sanctuary evictions would be halted or continued.

Updated on September 3, 2020 — while SHE (Safe Haven Encampment) has been permitted to remain, MPRB reportedly voted in favor of evicting the encampment at Peavey Park. Reports are also coming in that MPRB voted to have all sanctuary camps removed by October.

~2 dozen community members continue to wait in person on the decision of the Park Board (who’re teleconference presently).

As twilight approaches and day turns to night the sign in front of the building lit up. pic.twitter.com/pDh3NqVndz

In July 2020, Unicorn Riot interviewed Junail Anderson, co-founder of homeless advocacy group Freedom From The Streets, who pleaded for the city to not move unhoused people from their current locations:

As September begins in Minneapolis—and residents will experience the autumnal equinox in just under three weeks—there is still no long-term solution to addressing either homelessness or the lack of affordable housing in the city.

Meanwhile, more than 77,000 people in total have tested positive for COVID–19 in the state of Minnesota. As of September 2, over 1,800 have died from the highly-infectious disease.

Last week the city offered two free afternoons of COVID–19 testing one block away from George Floyd Memorial Square and across the street from a sanctuary encampment. Community groups such as the Black Liberation and Abolitionist Cohort (BLAC) have been working steadily to get the city to use its vast resources to offer 100% accessible, culturally-competent testing to Minneapolis’ diverse population, which includes people with no address and/or no health insurance.