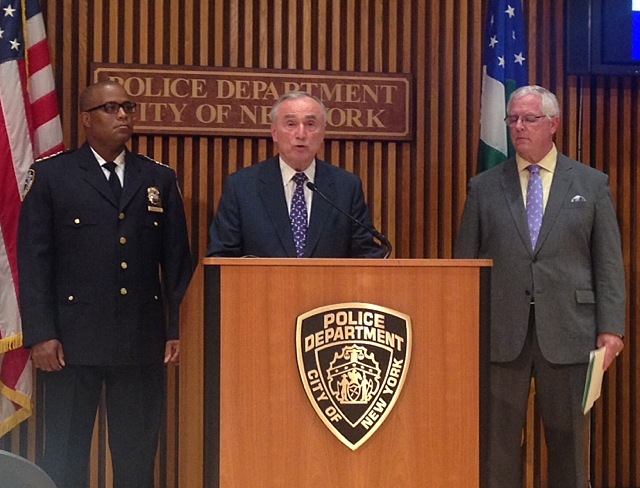 New NYPD Unit Will Get Machine Guns To Police Protesters

Note: If you want to tell the mayor and police chief why you oppose the arming of the NYPD with machine guns:

Murders reached a historic low in NYC for 2014; overall crime was down across the board by nearly 5%; hell, even the holiday slowdown didn’t really lead to any additional crime. So clearly, now is the time when NYC really needs to implement a new anti-terrorism program which would empower a team of NYPD officers to roam around the city carrying machine guns. What could gowrong?

Police Commissioner Bratton made the announcement earlier today at an event hosted by the Police Foundation at the Mandarin Oriental. He said that the new 350 cop unit, called The Strategic Response Group, will be dedicated to “disorder control and counterterrorism protection capabilities” against attacks like the hostage situation in Sydney, which the NYPD’s Deputy Commissioner of Intelligence John Miller said was an inevitability in NYC.

This new squad will be used to investigate and combat terrorist plots, lone wolf terrorists, and… protests. “It is designed for dealing with events like our recent protests, or incidents like Mumbai or what just happened in Paris,” Bratton said, according to CBS.

“They’ll be equipped and trained in ways that our normal patrol officers are not,” Bratton explained. “They’ll be equipped with all the extra heavy protective gear, with the long rifles and machine guns — unfortunately sometimes necessary in these instances.” Capital NY adds that these officers will also be used “to assist on crime scenes, and help with crowd control and other large-scale events.”

The pilot program will start in two precincts in Manhattan and two in Queens, though it’s unclear when they want to launch it. Bratton said Mayor de Blasio was on board, and he expected the City Council to be as well. He also said he thinks this will help improve relationships between cops and local residents. “Cops will know their sectors and the citizens will know them,” Bratton said. “They’ll know the problem areas and the problem people. I truly believe when cops embrace their neighborhoods, their neighborhoods will embrace them back.”

Already, local advocacy groups have spoken out against the plan; Priscilla Gonzalez, Organizing Director of Communities United for Police Reform, gave this statement.

Initial reports of Commissioner Bratton’s plans suggest the opposite of progress. His demands for less oversight of the NYPD and a more militarized police force that would use counter-terrorism tactics against protestors are deeply misguided and frankly offensive. We need an NYPD that is more accountable to New Yorkers and that stops criminalizing our communities, especially when people are taking to the streets to voice legitimate concerns about discriminatory and abusive policing. Despite growing evidence that discriminatory broken windows is a failed and harmful policing strategy, Commissioner Bratton stubbornly continues to defend and expand it.