Many centrist pundits have convinced themselves that Medicare for All (M4A) is unpopular because, when you include certain details about M4A in polling questions, support levels drop significantly. But in convincing themselves of this, centrist pundits seem remarkably incurious about whether this same thing occurs for employer-sponsored insurance (ESI) when you include certain details about it in polling questions.

Earlier this week, Emerson Polling helped answer this question when it asked voters whether they support employers being allowed to change or eliminate an employee’s health insurance against the employee’s wishes. Only 11 percent of voters said they supported this while 70 percent opposed it. 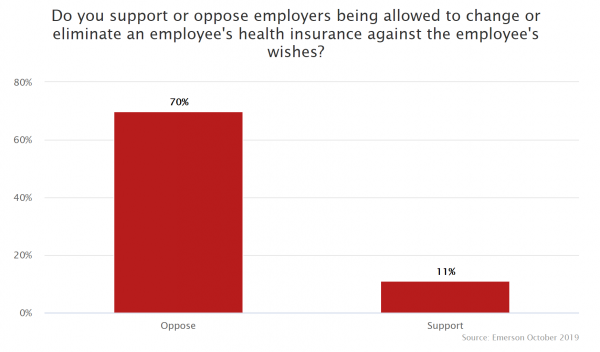 This key and inherent feature of ESI, which is present in our status quo system and is preserved in Buttigieg’s health plan and Biden’s health plan, is one of the least popular things I’ve ever seen polled about the US health care system.

What I make of polls like this, along with the rest of the polls conducted on health care proposals, is that as a general rule people absolutely hate the idea of insurance instability. The best way to scare people about M4A is to use talking points that make it seem like their insurance situation is going to become unstable, i.e. “you will lose your current health insurance plan.” But these same sort of talking points work equally well when trying to slam ESI. “Your employer can change or eliminate your health insurance at any time without your consent” is a terrifying thought but is exactly how ESI works.

Outside of the messaging game though, there is an objective answer to the question of whether M4A or ESI provides you the most stability. And the answer is that M4A does. After M4A is enacted, Americans will be seamlessly covered from cradle to grave by a national health plan that does not go away when they change jobs, when they turn 26, when their employer finds a cheaper alternative, or anything else.

This is a key selling point of M4A — you will never lose your health insurance ever again — and M4A advocates need to be emphasizing it more, especially when faced with spurious criticisms that attempt to somehow cast M4A as the system that causes people to lose their insurance.