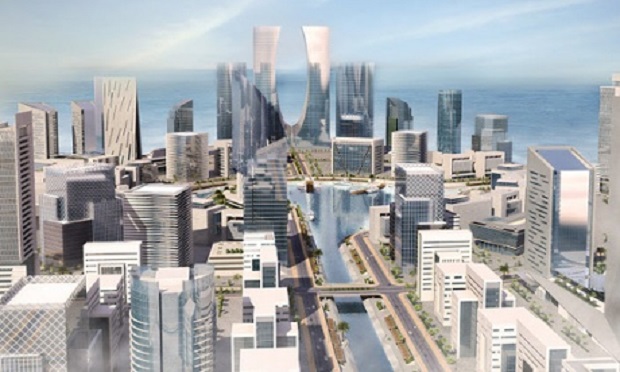 Above Photo: A simulation of the downtown in Eko Atlantic city, under construction in Lagos, Nigeria. Photograph: Eko Atlantic

It’s a sight to behold. Just off Lagos, Nigeria’s coast, an artificial island is emerging from the sea. A foundation, built of sand dredged from the ocean floor, stretches over ten kilometres. Promotional videos depict what is to come: a city of soaring buildings, housing for 250,000 people, and a central boulevard to match Paris’ Champs-Élysées and New York’s Fifth Avenue. Privately constructed, it will also be privately administered and supplied with electricity, water, mass transit, sewage and security. It is the “future Hong Kong of Africa,” anticipates Nigeria’s World Bank director.

Welcome to Eko Atlantic, a city whose “whole purpose”, its developers say, is to “arrest the ocean’s encroachment.” Like many low-lying coastal African countries, Nigeria has been hit hard by a rising sea-level, which has regularly washed away thousands of peoples’ homes. To defend against the coastal erosion and flooding, the city is being surrounded by the “Great Wall of Lagos”, a sea defence barrier made of 100,000 five-ton concrete blocks. Eko Atlantic will be a “sustainable city, clean and energy efficient with minimal carbon emissions,” offer jobs, prosperity and new land for Nigerians, and serve as a bulwark in the fight against the impacts of climate change.

At least that’s the official story. Other facts suggest this gleaming city will be a menacing allure to most. In congested Lagos, Africa’s largest city, there is little employment and millions work and scavenge in a vast, desperate informal economy. Sixty percent of Nigeria’s population – almost 100 of 170 million people – live on less than a dollar a day. Preventable diseases are widespread; electricity and clean water hard to come by. A few kilometres down the Lagos shoreline, Nigerians eke out an existence in the aquatic slum of Makoko, built precariously on stilts over the ocean. Casting them as crime-ridden, the government regularly dismantles such slums, bulldozing homes and evicting thousands. These are hardly the people who will scoop up square footage in Eko Atlantic’s pricy new high-rises.

Those behind the project – a pair of politically connected Lebanese brothers who run a financial empire called the Chagoury Group, and a slew of African and international banks – give a picture of who will be catered to. Gilbert Chaougry was a close advisor to the notorious Nigerian dictatorship of the mid 1990s, helping the ultra-corrupt general Sani Abacha as he looted billions from public coffers. Abacha killed hundreds of demonstrators and executed environmentalist Ken Saro-Wiwa, who rose to fame protesting the despoiling of the country by Shell and other multinational oil corporations. Thus it’s fitting for whom the first 15-story office tower in Eko Atlantic is being built: a British oil and gas trading company. The city proposing to head off environmental devastation will be populated by those most responsible for it in the first place.

The real inspiration for Eko Atlantic comes not from these men but the dreamworlds of rampant capitalism, stoked by a successful, thirty year global campaign to claw back gains in social security and unchain corporations from regulation – what we now know as neoliberalism. In Nigeria, oil wealth plundered by a military elite spawned extreme inequalities and upended the economy. Under the IMF’s neoliberal dictates, the situation worsened: education and healthcare were gutted, industries privatized, and farmers ruined by western products dumped on their markets. The World Bank celebrated Nigeria; extreme poverty doubled. The most notorious application of the power of the Nigerian state for the interest of the rich came in 1990: an entire district of Lagos – 300,000 homes – was razed to clear the way for high-end real-estate development.

As elites in Nigeria and elsewhere have embraced such inequality as the very engine of growth, they have re-established some of the most severe forms of colonial segregation and gated leisure. Today, boutiques cannot open fast enough to serve the Nigerian millionaires buying luxury cars and yachts they’ll be able to dock in Eko Atlantic’s down-town marina. Meanwhile, thousands of people who live in communities along the coast expect the new city will bring displacement, not prosperity, says environmental activist Nnimmo Bassey. To get their way, the developers, backed by industry and politicians, have trampled over the country’s environmental assessment process. “Building Eko Atlantic is contrary to anything one would want to do if one took seriously climate change and resource depletion,” he says.

The wealthy and powerful may in fact take climate change seriously: not as a demand to modify their behaviour or question the fossil-fuel driven global economy that has made it possible, but as the biggest opportunity yet to realize their dreams of unfettered accumulation and consumption. The disaster capitalists behind Eko Atlantic have seized on climate change to push through pro-corporate plans to build a city of their dreams, an architectural insult to the daily circumstances of ordinary Nigerians. The criminalized poor abandoned outside their walls may once have served as sufficient justification for their flight and fortification – but now they have the very real threat of climate change as well.

Eko Atlantic is where you can begin to see a possible future – a vision of privatized green enclaves for the ultra rich ringed by slums lacking water or electricity, in which a surplus population scramble for depleting resources and shelter to fend off the coming floods and storms. Protected by guards, guns, and an insurmountable gully – real estate prices – the rich will shield themselves from the rising tides of poverty and a sea that is literally rising. A world in which the rich and powerful exploit the global ecological crisis to widen and entrench already extreme inequalities and seal themselves off from its impacts – this is climate apartheid.

Prepare for the elite, like never before, to use climate change to transform neighbourhoods, cities, even entire nations into heavily fortified islands. Already, around the world, from Afghanistan to Arizona, China to Cairo, and in mushrooming mega-cities much like Lagos, those able are moving to areas where they can live better and often more greenly – with better transport and renewable technologies, green buildings and ecological services. In Sao Paulo, Brazil, the super-rich – ferried above the congested city by a fleet of hundreds of helicopters – have disembedded themselves from urban life, attempting to escape from a common fate.

In places like Eko Atlantic the escape, a moral and social secession of the rich from those in their country, will be complete. This essentially utopian drive – to consume rapaciously and endlessly and to reject any semblance of collective impulse and concern – is simply incompatible with human survival. But at the moment when we must confront an economy and ideology pushing the planet’s life-support systems to breaking point, this is what the neoliberal imagination offers us: a grotesque monument to the ultra-rich flight from responsibility.

There are, however, alternatives, like one proposed for the Makoko slum, the home of a quarter-million Nigerians – the same number who are intended to inhabit Eko Atlantic. Nigerian architect Kunle Adeyemi has designed what amounts to a counter-point, a floating settlement of which a school has already been built – making it only the second school that Makoko has ever had. The floating structures – made of low-cost wood and buoyed by recycled plastic barrels – have solar panels, sloped roofs to harvest rainwater, and compost toilets to solve dire sanitary needs.

Nnimmo Bassey thinks the floating settlements are just the thing to help the sustainable development of under-served communities across Nigeria’s coastlines. “It is a structure that suits the environment, is easy to replicate and appropriate to peoples’ lifestyle, and is sensitive to the challenges of sea level rise,” he says. “It would help create what we need: communities for people, not gated anti-people communities.”

The project is animated by a very different vision: that we must share rather than hoard, reduce inequality rather than increase it, and encourage the resiliency of everyone rather than the escape from the worst for a few. That the needs of the most vulnerable, rather than the desires of the most wealthy, must be the starting point of any effort to truly combat the climate crisis.

The choices before Lagos confront us all. While ours is not the first civilization whose elites have proved spectacularly indifferent to collective, ecological survival, it is up to us whether we will be the last.