Giles County, VA — Early Monday morning, pipeline protesters in the Jefferson National Forest erected a new aerial blockade on Pocahontas Road near Narrows, VA. The blockade consists of a protester on a platform 30 feet in the air, suspended from a horizontal rope tied to surrounding trees. Banners at the site read “WHICH SIDE ARE YOU ON?” and “STILL HERE.” Pocahontas Road is a Forest Service road and Mountain Valley Pipeline (MVP) access road that leads to the construction site for MVP’s intended boring through Peter’s Mountain, under the Appalachian National Scenic Trail. The presence of this roadblock prevents MVP’s continued construction of the access road and boring site, which has already been significantly delayed for well over 50 days by the presence of protester Nutty in an aerial blockade on the same road less than 3 miles away.

“I am taking a stand on Peters Mountain to prevent the further devastation of these lands by the Mountain Valley Pipeline,” said Fern MacDougal, the protester suspended in the new blockade. “Cutting through delicate karst topography and 300 miles of contiguous forest and family farms seized by eminent domain, MVP threatens to damage the health and wellbeing of poor and oppressed communities along the pipeline route by threatening the air, soil, and water. This pipeline will catalyze the growth and expansion of gas extraction across Appalachia, an industry which has already caused permanent harm to many communities. We are dedicated to resisting this reckless endangerment of the land and people as long as MVP continues to operate.” MacDougal further stated that she was inspired to take this action by monopod sitter Nutty and by David Buckel, an LGBTQ rights lawyer who died in April after setting himself on fire as a protest against the use of fossil fuels. 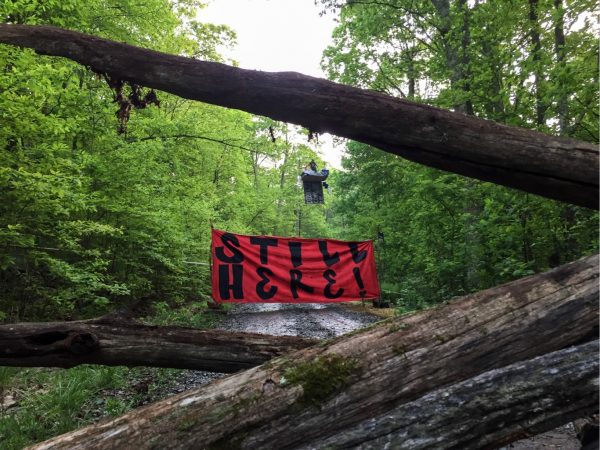 Mountain Valley Pipeline, LLC has faced significant resistance to its plans for this 42-inch diameter fracked gas pipeline since 2014. In the past few months, numerous sites of direct action have sprung up, severely interfering with pipeline construction. A total of nine aerial blockades have now been launched by various groups and individuals across the pipeline route, including a tree sit near the ridge on Peters Mountain and a monopod blockade on Pocahontas Road, which have been occupied since February 26 and March 28

Korine Kolivras, a resident of neighboring Montgomery County, VA who has been active in the pipeline resistance, explained her support for the new blockade: “We need clean drinking water. We need to live without fear of a massive explosion. We do not need another pipeline. We do not need to hand over our lands just so the pockets of executives can fill even further. This pipeline is not a public good; it benefits only corporate interests. I support continued actions to stop this unnecessary pipeline that would ruin our beautiful forests and communities. We the people are speaking.”

Since the launch of the first tree sit in the Jefferson National Forest — and in fact, since the initial proposal of the Mountain Valley Pipeline — Jefferson National Forest Supervisor Joby Timm has made it clear the he and the US Forest Service (USFS) value the interests of a private pipeline company over that of the people and ecosystems it will devastate. From amending the Forest Plan to approve the pipeline, to issuing numerous “emergency” forest and road closures, to arresting multiple supporters on the ground while preventing resupplies to the sitters, the USFS has made its stance clear. MVP continues to claim that it is on schedule for construction, although it remains to be seen how the company intends to meet its planned in-service date of late 2018, as the flames of resistance continue to spread. 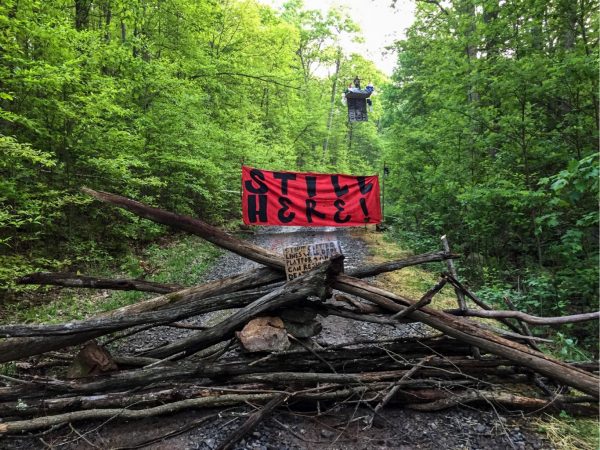