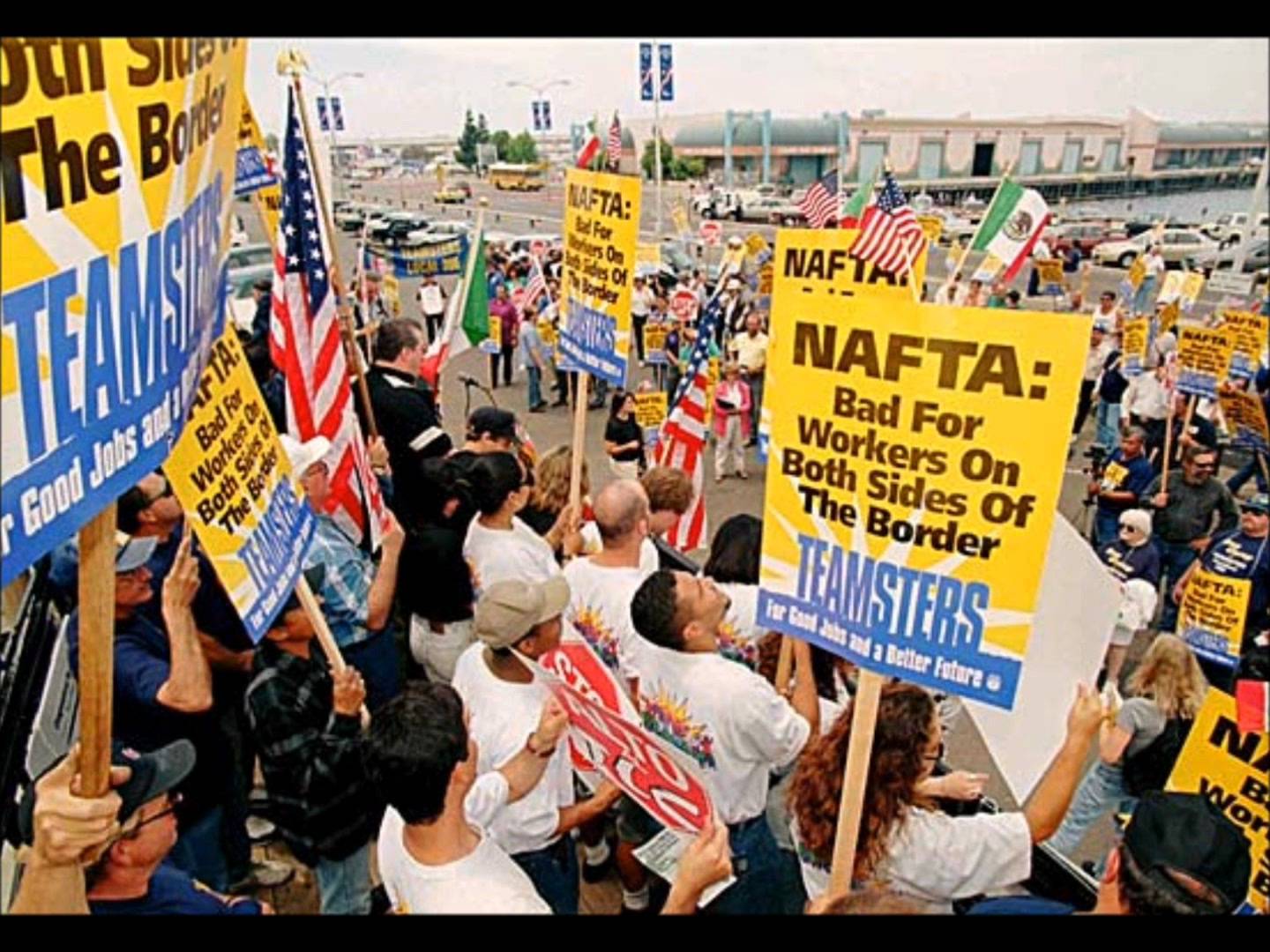 WASHINGTON, D.C. Dec. 28, 2013 – On the eve of the North American Free Trade Agreement’s (NAFTA) 20th anniversary (Jan. 1), a new Public Citizen report shows that not only did promises made by proponents not materialize, but many results are exactly the opposite. Such outcomes include a staggering $181 billion U.S. trade deficit with NAFTA partners Mexico and Canada, one million net U.S. jobs lost because of NAFTA, a doubling of immigration from Mexico, larger agricultural trade deficits with Mexico and Canada, and more than $360 million paid to corporations after “investor-state” tribunal attacks on, and rollbacks of, domestic public interest policies.

The study tracks the promises made by U.S. corporations like Chrysler and Caterpillar to create specific numbers of American jobs if NAFTA was approved, and reveals government data showing that instead, they fired U.S. workers and moved operations to Mexico. The data also show how post-NAFTA trade and investment trends have contributed to middle-class pay cuts, which in turn contributed to growing income inequality; how since NAFTA, U.S. trade deficit growth with Mexico and Canada has been 45 percent higher than with countries not party to a U.S. Free Trade Agreement, and how U.S. manufacturing and services exports to Canada and Mexico have grown at less than half the pre-NAFTA rate.

“NAFTA’s actual outcomes prove how damaging this type of agreement is for most people, that it should be renegotiated and why we cannot have any more such deals that include job-offshoring incentives, requirements we import food that doesn’t meet our safety standards or new rights for firms to get taxpayer compensation before foreign tribunals over laws they don’t like,” said Lori Wallach, director of Public Citizen’s Global Trade Watch. “Given NAFTA’s record of damage, it is equal parts disgusting and infuriating that now President Barack Obama has joined the corporate Pinocchios who lied about NAFTA in recycling similar claims to try to sell the Trans-Pacific Partnership (TPP), which is NAFTA-on-steroids.”

As Americans have lived with NAFTA’s effects since its Jan. 1, 1994, start, public opinion has shifted dramatically, from a narrow divide during the 1993 NAFTA debate to overwhelming opposition today. A 2012 Angus Reid Public Opinion poll found that 53 percent of Americans believe the U.S. should “do whatever is necessary” to “renegotiate” or “leave” NAFTA, while only 15 percent believe the U.S. should “continue to be a member of NAFTA.” That opposition cuts across party lines, class divisions and education levels, perhaps explaining growing controversy over the proposed deepening and expansion of the NAFTA model through the TPP.

Among the study’s findings:

Rather than creating in any year the 170,00 jobs per year promised by former President Bill Clinton on the basis of Peterson Institute for International Economics projections, job loss from NAFTA began rapidly:

– American manufacturing jobs were lost as U.S. firms used NAFTA’s new foreign investor privileges to relocate production to Mexico to take advantage of that country’s lower wages and weaker environmental standards, and as a new flood of NAFTA imports swamped gains in exports, creating a massive new trade deficit that equated to an estimated net loss of one million U.S. jobs by 2004. A small pre-NAFTA U.S. trade surplus of $2.5 billion with Mexico turned into a huge new deficit, and a pre-NAFTA $29.1 billion deficit with Canada exploded. The NAFTA-spurred job loss has not abated during NAFTA’s second decade, as the burgeoning post-NAFTA U.S. trade deficit with Canada and Mexico has not declined.

– More than 845,000 U.S. workers in the manufacturing sector have been certified for Trade Adjustment Assistance (TAA) since NAFTA because they lost their jobs due to imports from Canada and Mexico or the relocation of factories to those countries. The TAA program is quite narrow, covering only a subset of jobs lost at manufacturing facilities, and is difficult to qualify for. Thus, the NAFTA TAA numbers significantly undercount NAFTA job loss.

NAFTA contributed to downward pressure on U.S. wages and growing income inequality. According to the U.S. Bureau of Labor Statistics, two out of every three displaced industrial workers who were rehired in 2012 experienced wage reductions, most of more than 20 percent. As increasing numbers of workers displaced from manufacturing jobs joined the glut of workers competing for non-offshorable, low-skill jobs in sectors such as hospitality and food service, real wages have also fallen in these sectors since NAFTA. The resulting downward pressure on wages has fueled recent growth in income inequality.

Scores of NAFTA countries’ environmental and health laws have been challenged in foreign tribunals through the controversial investor-state dispute resolution system. More than $360 million in compensation to investors has been extracted from NAFTA governments via “investor-state” tribunal challenges against toxics bans, land-use rules, water and forestry policies and more. More than $12.4 billion is currently pending in such claims, including challenges of medicine patent policies, a fracking moratorium and a renewable energy program.

The average annual U.S. agricultural trade deficit with Mexico and Canada under NAFTA stands at $800 million, more than twice the pre-NAFTA level. U.S. beef imports from Mexico and Canada, for example, have risen 130 percent. This stands in stark contrast to the promises made to U.S. farmers and ranchers that NAFTA would allow them to export their way to newfound wealth and farm income stability. Despite a 188 percent rise in food imports from Canada and Mexico under NAFTA, the average nominal price of food in the United States jumped 65 percent since NAFTA went into effect.

The reductions in consumer goods prices that have materialized have not been sufficient to offset the losses to wages under NAFTA; U.S. workers without college degrees (63 percent of the workforce) likely have lost a net amount equal to 12.2 percent of their wages even after accounting for gains from cheaper goods. This net loss means a loss of more than $3,300 per year for a worker earning the median annual wage of $27,500.

The export of subsidized U.S. corn did increase under NAFTA, destroying the livelihoods of more than one million Mexican campesino farmers and about 1.4 million additional Mexican workers whose livelihoods depended on agriculture.

– The desperate migration of those displaced from Mexico’s rural economy pushed down wages in Mexico’s border maquiladora factory zone and contributed to a doubling of Mexican immigration to the U.S. following NAFTA’s implementation.

– Though the price paid to Mexican farmers for corn plummeted after NAFTA, the deregulated retail price of tortillas – Mexico’s staple food – shot up 279 percent in the pact’s first 10 years.

Facing displacement, rising prices and stagnant wages, more than half the Mexican population, and more than 60 percent of the rural population, still falls below the poverty line, despite the promises that NAFTA would bring broad prosperity to Mexicans.

Yet despite overwhelming evidence of NAFTA’s failure, the Obama administration has made it a priority for next year to sign the TPP, a sweeping pact with 11 Pacific Rim nations premised on expanding the NAFTA model. Past efforts to expand NAFTA throughout Latin America via a Free Trade Area of the Americas and to Asia via an Asian Pacific Economic Cooperation (APEC) Free Trade Agreement failed as the major economies in each region sought to avoid the damage they observed NAFTA causing within the United States and Mexico.

“Given NAFTA’s devastating outcomes, few of the corporations or think tanks that sold it as a boon for all of us in the 1990s like to talk about it, but the reality is that their promises failed, the opposite occurred and millions of people were severely harmed,” said Wallach. “Now the same interests that dished out lies to sell NAFTA are at it again to push the TPP, but the difference is that 20 years of the NAFTA experience has turned Americans against these sorts of deals. Apparently politicians have noticed, because in Congress across the political spectrum, opposition is only growing to the TPP and the Fast Track trade authority that was used to railroad NAFTA through Congress.”

See the report at http://www.citizen.org/documents/NAFTA-at-20-embargoed.pdf