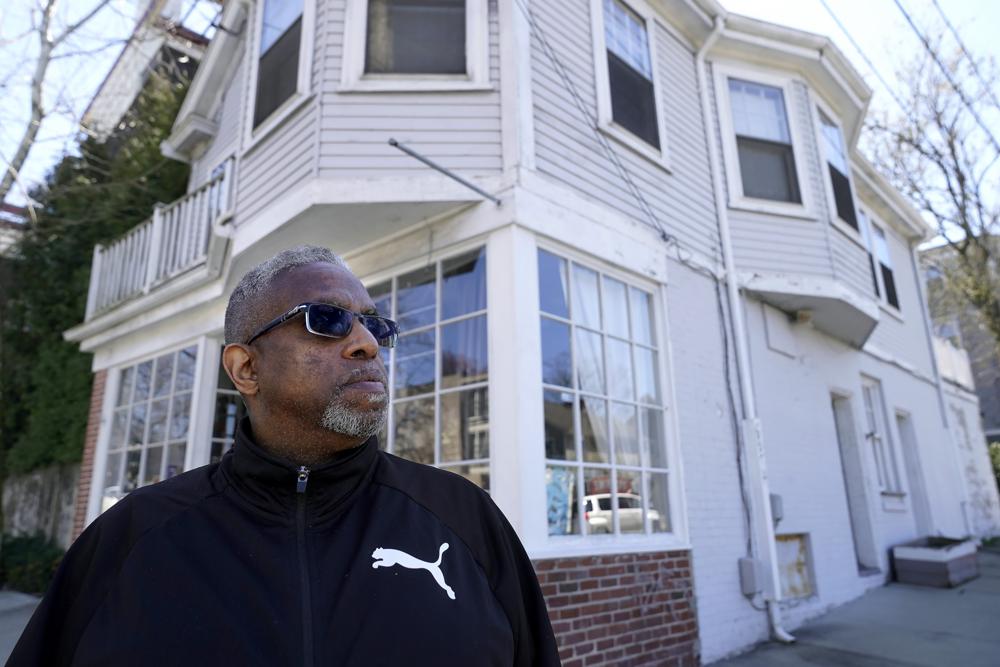 Above Photo: Terrell Osborne, of Providence, R.I., stands for a portrait, Monday, April 11, 2022, in front of an antique shop, that was a general store in the early 1960s, in what was then known as the Lippitt Hill neighborhood, in Providence. As a child growing up in Providence in the late 1950s and 1960s, he watched as huge swaths of his 30-acre neighborhood of Lippitt Hill, a center of Black life at the foot of the stately homes of the city’s elite East Side, were taken by eminent domain for redevelopment projects. The general store was just outside the area of demolition. AP Photo / Steven Senne.

As a child growing up in Providence, Rhode Island, in the 1950s and 1960s, huge swaths of his neighborhood of Lippitt Hill, a center of Black life at the foot of the stately homes of the city’s elite East Side, were taken by eminent domain for redevelopment projects.

Hundreds of Black families and dozens of minority small businesses across some 30 acres were bulldozed. In their place rose an apartment complex catering to downtown workers and students and faculty at nearby Brown University, as well as a shopping plaza now anchored by a Whole Foods and a Starbucks.

Meanwhile, Black families like the Osbornes were scattered across the city and never compensated.

“We had stores. People owned things. Money was circulating around,” said Osborne, who now lives on Providence’s South Side. “There was a whole community there, and they just took that neighborhood and we never got anything for it. Not even as much as a thank you.”

As Providence gears up to provide reparations to Black residents for centuries of injustices, city officials are looking beyond the city’s leading role in the Colonial transatlantic slave trade.

They’re looking to atone, at least initially, for what happened during urban renewal efforts of the late 20th century, a period that saw Black and Native American communities such as Lippitt Hill razed to make way for new residential and business developments that paved the way for the city’s modern economy, anchored around its universities and hospitals.

The approach builds off the blueprint in Evanston, a Chicago suburb that became the first in the nation to begin paying reparations last year with a program providing Black residents grants for mortgage payments and home repairs, in acknowledgement of the historic discrimination Black people endured when trying to buy homes.

Local cities and towns, college and even states are increasingly taking up reparations as efforts at the federal level have gone nowhere. Harvard University announced last week it’ll spend $100 million to atone for its slave ties while California is pioneering a statewide task force on reparations.

“We know its a losing conversation to talk about slavery in the 1600s,” said Raymond “Two Hawks” Watson, a member of Providence’s recently formed reparations commission whose family has long lived in the Lippitt Hill area. “But we also know we don’t have to go that far back. We know what happened with urban renewal and we can see what’s happening with gentrification. We’re able to show this is just a continuation of what’s been going on for centuries.”

Providence’s efforts also notably look to use some $15 million in federal COVID-19 funds to jump-start reparations work, something other city leaders have pursued recently.

In Athens, Georgia, Mayor Kelly Girtz says his proposed budget calls for using pandemic relief money to establish a housing fund for Black residents akin to Evanston’s. Athens, like Providence, seeks to atone for the razing of the Black neighborhood of Linnentown to make way for University of Georgia dormitories and parking lots in the 1960s.

In Providence, centuries of discrimination have left communities of color far poorer than white enclaves: Median household income on the affluent, largely white East Side is nearly $180,000 a year, compared to nearly $19,000 in the city’s predominantly Black and Latino South Side.

On Lippitt Hill, families weren’t compensated but instead offered priority in claiming a unit in the new residential development, which became known as University Heights, says Osborne. But the modern apartments were financially out of reach for most.

Cheryl Taylor, whose family was forced to move and shutter their repair business on Lippitt Hill to make way for another development, hopes the reparations process can help Black residents purchase their own homes. The few like her who remain living nearby are renters in an increasingly unaffordable part of town.

“They’re all white. I don’t know these people,” Taylor says of the neighborhood’s newer residents.

Looking back, Osborne wonders if the destruction of his old neighborhood was an effort to dilute the growing power of the city’s Black community.

Osborne’s family was among a number of working class but upwardly mobile Black households on the hillside that separates the East Side from downtown.

His grandfather, Clarence “Legs” Osborne, was a trumpeter who played with Count Basie, Duke Ellington and other famous Black musical acts. His uncle, Jeffrey Osborne, went on to become a Grammy-nominated R&B singer with a string of hits in the 1980s, including “On the Wings of Love.”

Osborne, who heads a Providence organization that provides musical opportunities to youths, says he’d like to see the city establish a college scholarship fund or programs to help Black residents build equity, rather than making direct payouts to impacted families like his.

“The question with reparations is always where do you start. Why not start with something that’s tangible?” he said. “We’re here. We’re not buried in the past, and we know something should have happened then. Maybe now is the time.”