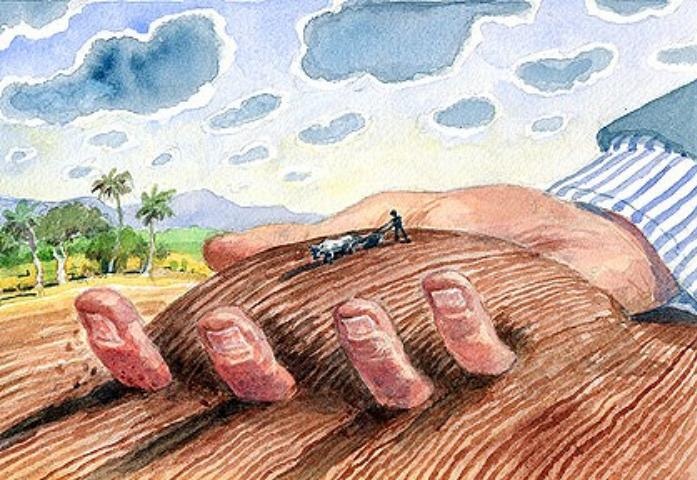 In the 1980s and 1990s, the World Bank and International Monetary Fund’s (IMF) intervention in developing countries’ national policies, through aid conditionality and austerity programs known as Structural Adjustments Programs (SAPs), triggered a wave of global resistance against the International Financial Institutions (IFIs). in the face of growing criticism that these policies increased poverty, debt, and dependency on rich countries, saps were eventually withdrawn in 2002; however the World Bank, through renewed means, continues to pursue and impose its neoliberal agenda on the developing world.

In the 1980s and 1990s, the World Bank and International  Monetary Fund’s (IMF) intervention in developing countries’  national policies, through aid conditionality and austerity  programs known as Structural Adjustments Programs (SAPs),  triggered a wave of global resistance against the International  Financial Institutions (IFIs). In the face of growing criticism that  these policies increased poverty, debt, and dependency on rich  countries, SAPs were eventually withdrawn in 2002; however the  World Bank, through renewed means, continues to pursue and  impose its neoliberal agenda on the developing world.

The World Bank’s ability to influence government policies  stems from its tremendous economic power. In 2012, the  Bank’s total lending to developing countries reached $35  billion,1 over a quarter of the total global Official Development  Assistance (an international indicator of aid flow) for the same  year.2 Additionally, through the annual publication of its Doing  Business report, a country-by-country economic ranking on  the “ease of doing business,” the Bank sets standards for  investors, bilateral donors, and development institutions  around the world and pressures countries to improve their  rating by enacting neoliberal regulatory reforms.3

Despite  its positive veneer, the report encourages governments to  eliminate economic, social, and environmental safeguards  and promotes competition among countries for higher  rankings and, consequently, higher foreign direct investment.4  The Bank’s financial power and political leverage has made  it difficult for cash-poor countries to oppose the institution,  while its ability to manage public image through perpetuation  of myths around its mission and activities has enabled the  Bank to withstand its critics.

In the agricultural domain for instance, the Bank claims to work  to secure farmers’ access to land; however its direct financing  to firms practicing large-scale and export-oriented agriculture  is increasing pressure on land, water, and forests. In several  countries, including Honduras and Lao People’s Democratic  Republic (PDR), the Bank has directly supported investors  that are grabbing land from local populations and that involve  significant human rights violations.5 Recently, the Bank’s  proposal to revise its environmental and social safeguard  policies triggered concern that the institution will increase  financing of projects that are damaging for the environment  and local communities.6

The World Bank’s agriculture-related projects, which it claims  aim to defend the interests of smallholders, in fact negate  the potential of small-scale agriculture and agroecological  practices to bring sustainable and inclusive development  to countries. With the stated goal to increase smallholders’ productivity and integrate them in the global market, the Bank promotes contract-farming schemes  and the adoption of input-intensive techniques. This glosses over the food security  and dependence risks associated with making farmers  and countries’ agricultural production reliant on deeply  oligopolistic international markets, where for instance only  three companies, Monsanto, DuPont and Syngenta, control  50% of the world production of commercial seeds.7

In reality, since the 1980s, the Bank has pushed an export-based, neoliberal vision of agriculture that exposes farmers to the rules of volatile, competitive global markets and denies them adequate support from their governments. The Bank  considers that states’ interventions on agricultural markets  are an impediment to growth and discards examples such as  Indonesia, where active price support for farmers’ production  and trade interventionism prevented increases in food prices  in 2008.8

The 2008 high food price crisis, which provided a striking  example of the flaws of international agricultural markets,  did not shift the Bank’s strategy. The institution continues  to promote the notion that open markets for the private  sector will bring growth and lead to better rural development  than state-led programs. As a result, the Bank pressures  governments to incentivize foreign direct investment (FDI),  its silver bullet to replace public intervention in agriculture.  However, World Bank–supported policies to attract FDI in countries without proper institutional, social and  environmental safeguards have spurred land grabbing and  displacement of local populations (Box 1) without bringing  development outcomes.9

In 2014, the Our Land Our Business campaign was launched  to denounce the role of the World Bank’s Doing Business  report and new Benchmarking the Business of Agriculture  (BBA) project, which steer policy makers toward adopting  reforms that incentivize private investment in agriculture.10  Through such tools, the World Bank pressures countries to  cultivate business-friendly environments for foreign investors  in agriculture, hampering the formulation of sound national  agricultural policies. These could include price insurance
policies for producers, programs of support to farmers’  cooperatives, creation of knowledge sharing and reliance  building programs, and enhancing farmers’ investment in  productive activities through ensuring their sustained access  to land and natural resources.11

Overall, while the name has changed, the game remains  unchanged from the days of SAPs. Neoliberal policies are still  imposed on governments of the developing world that perpetuate inequality and a race to the bottom through exploitation and  marginalization of the poorest countries, their land and people.  It is time to tackle the myths that World Bank perpetuates under  the guise of development strategy, to question the “growth at  all cost” agenda, and to ensure governments and populations  control their economic destinies.