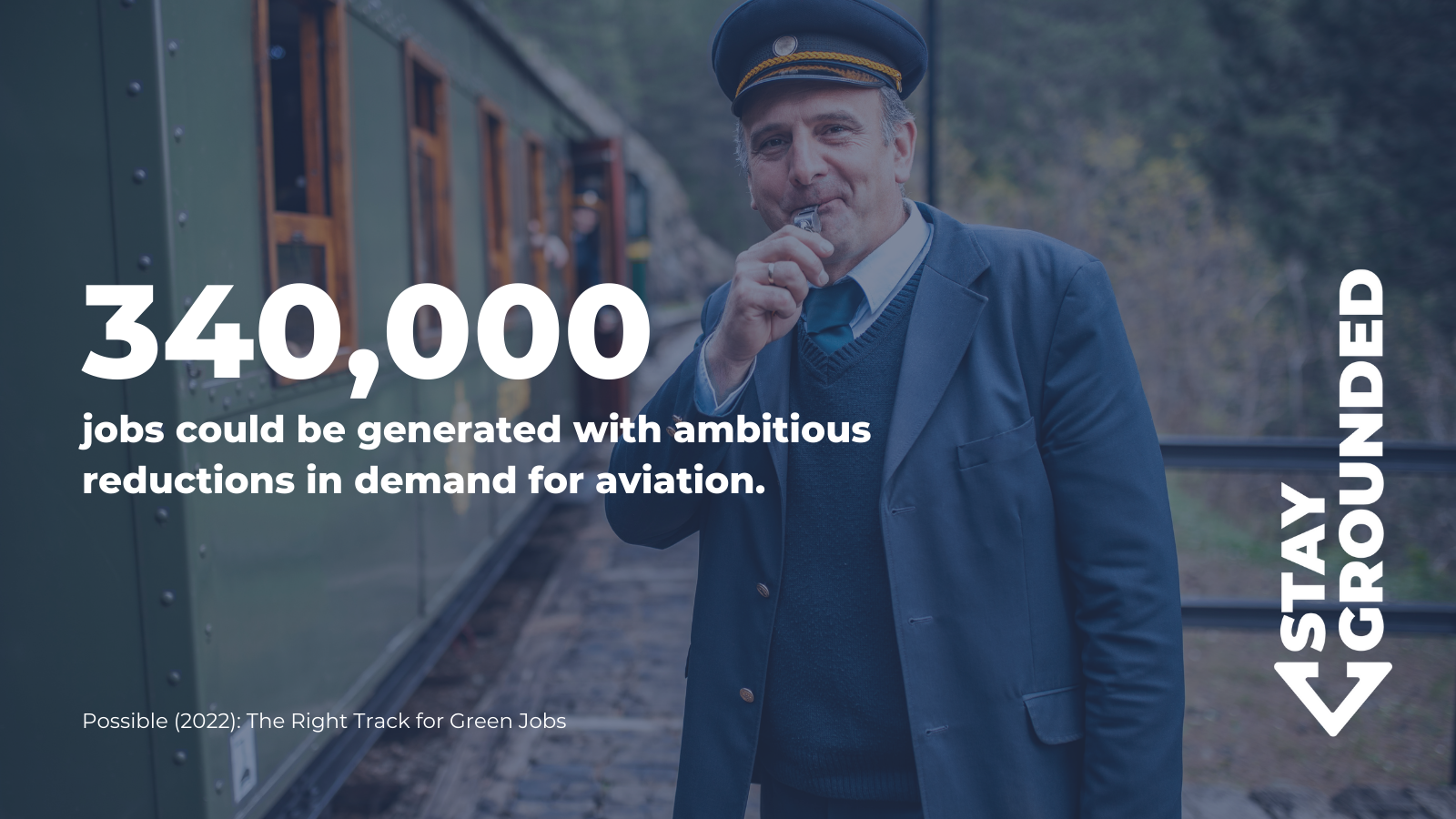 In their new report titled, “The right track for Green Jobs” Possible, Autonomy UK and Safe Landing present scenarios for showing that cuts to aviation can more than compensate for job losses to the aviation sector. No more excuses, green jobs are possible especially when people are willing to fly less.

While we at Stay Grounded and those in our network have proposed numerous strategies for reducing climate impacts from aviation, we also realize the need to emphasize a just transition towards a grounded future that helps counter some of the negative impacts of reduced flying. The Covid-19 pandemic has given many of us a taste of what a reduced ability to travel, and especially to fly, for leisure and to visit loved ones feels like. In the aviation sector, technological changes in the industry paired with the pandemic means workers have also been hard hit with both high numbers of job losses as well as worsened working conditions.

Speaking particularly to the impact on jobs from less flying, We Are Possible, Autonomy UK and Safe Landing just released a new report in which they model different scenarios for reducing demands for flying while maintaining the ability to travel domestically via trains or low-emissions ferries and the impacts these shifts would have on the UK’s job market. Amongst their findings, Authors found that:

Possible’s analysis shows that contrary to the oft-touted rhetoric from aviation enthusiasts that many would be out of work if flights were reduced, there are ways to ensure green jobs are created without relying on “a business-as-usual pathway for aviation”. 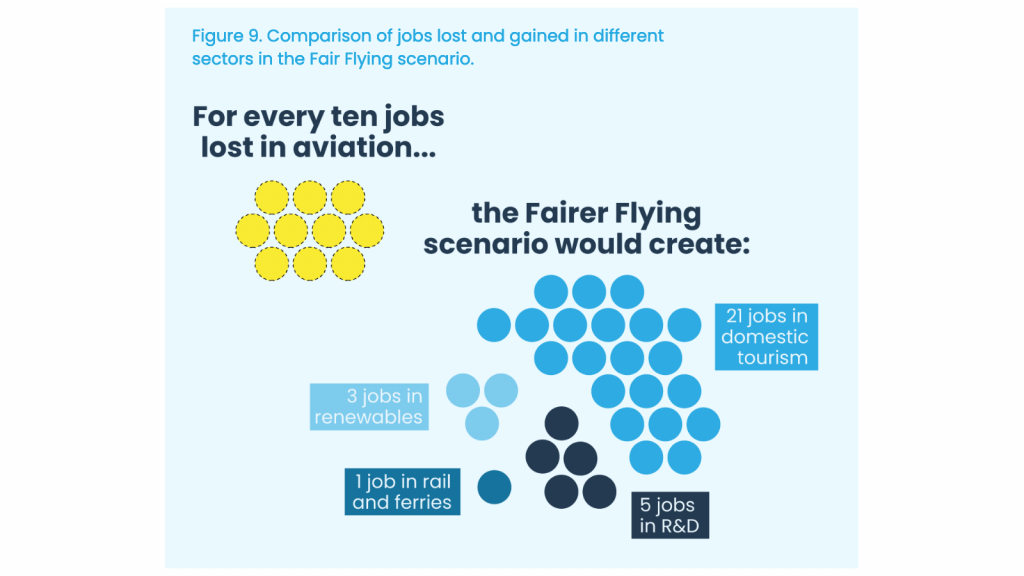 How Does Flying Less = More Jobs?

Well for starters, people are ready to fly less and that’s good news because “if people who typically fly more than once per year cut back to just one flight per year, that would cut the overall level of flights by more than half…” with corresponding emissions reductions. That sounds like low hanging fruit but the fact is, to kick flying, rail needs to be more affordable than flying. In fact, as Possible concluded in another of their recent reports, two-thirds of the people in a survey reported they would be willing to take a train if it were cheaper than flying.

Connected to this issue is the need for increased rail capacity. The UK and EU have already increased rail capacity and are only expected to do so further in the coming decade. A growing rail infrastructure means more jobs and a huge number of short-haul flights being replaced by trains. The study finds that:

capacity, undertaken in early 2019, suggests that the capacity for 20m additional passenger journeys a year can be added, creating 6,500 new jobs – 1,650 directly in rail, up to 3,000 in the rail supply chain, and up to 2,000 in construction and engineering.

The study emphasizes that the pathway towards vastly reduced demand in the aviation sector hinges on “public support and enthusiasm for this transition”. What could be more popular than getting ahead of the job losses already taking place in the aviation sector due to Covid-19 as well as technological changes in the industry? Authors highlight that:

Employment has been maintained (and even expanded) only because demand for air passenger travel has grown so much that it has more than counterbalanced the decreasing number of jobs required to transport a given number of passengers.

The creation of jobs in sectors related to greener transport along with the “funded right to retrain” will help keep workers on their feet in transport and tourism-related industries while staving off mass unemployment from the aviation sector. In practice, this means workers will also need financial assistance for moving into a less carbon-intensive field where their skills in the hospitality and mobility sectors can continue being utilized. The development of e-fuels would also create jobs while offsetting fossil fuel related emissions to some extent. We can also see from table 5 that average incomes are actually often higher for non-aviation workers. 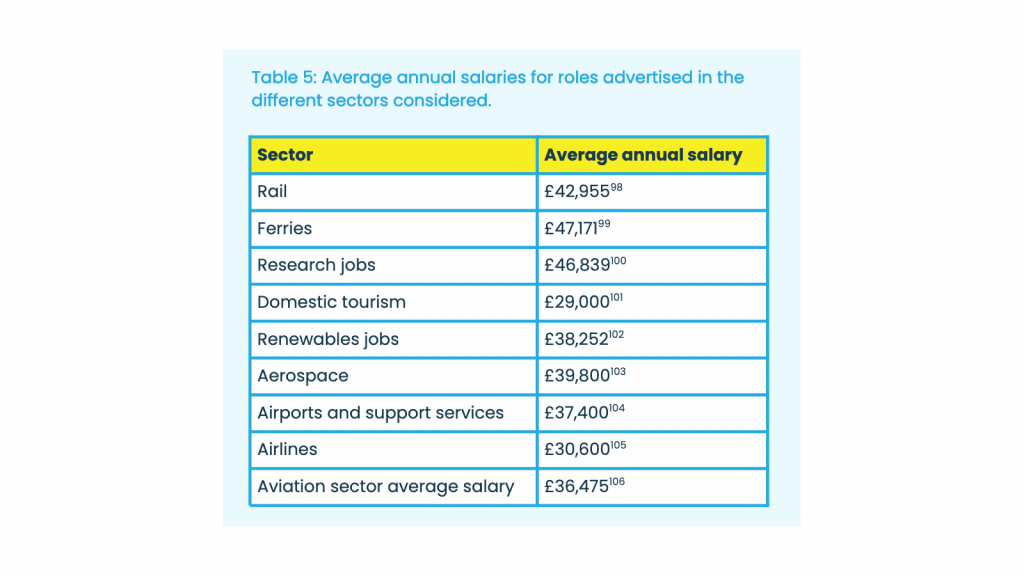 The domestic tourism industry could be a key arena for job creation since operationally, it requires a higher ratio of workers than other travel-related industries – see table 3. Moreover, domestic tourism is set to increase due to events like the Covid-19 pandemic but also based on:

shifting consumer preferences and policy decisions as ambition amps up on emissions reductions, along with growing public concern about the climate crisis and consumer willingness to change behavior to reduce emissions. 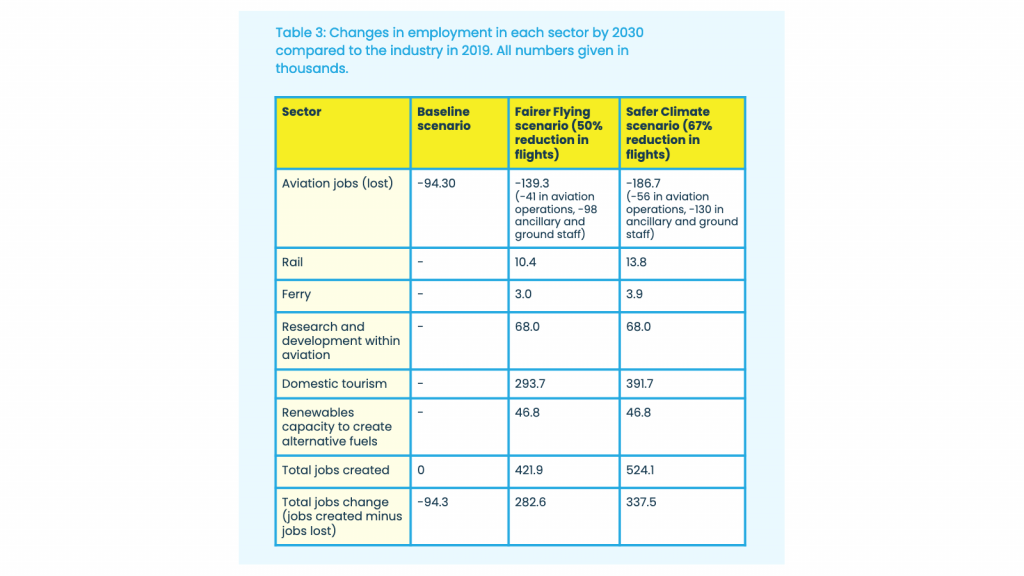 And What About Carbon-Cutting Technologies And Measures:

The report makes clear that relying on decarbonizing technologies is at present a farce – and a dangerous one at that, given our ever-shorter timeline for cutting emissions to avoid the worst effects of the climate crisis. The authors exclude offsets since they do not allow for emissions reductions urgently needed in the aviation sector. Technology like electric planes for short-range flights, which won’t be ready until at least 2040, and hydrogen planes until at least 2035 are also not reliable sources for emissions reductions.

Meanwhile, the idea of sustainable aviation fuels – biofuels, fuels made from waste and e-fuels – and their overall affects on emissions is questionable, and that’s without mentioning the environmental justice-related concerns over eg, land use, water and food security, etc. Moreover, e-fuels are still in early stages of development and a “breakthrough in alternative fuels” is not optimistic within current limits of research and development. This is precisely why the authors highlight the need to cut emissions by reducing demands for flights.

While the scenarios modelled in the report do not include negative emissions technologies for removing greenhouse gases, they do however include assumptions for the use of hydrogen or electric, aka e-fuels, even if they won’t be ready for use by 2030 and are not zero-emission fuels. The authors do this because there aren’t a lot of options for:

“short-term solution[s] to allow some level of aviation to continue while minimizing harm to the climate; and because the aviation industry and the government expect them to play a role”

The report highlights how efficiency gains in the aviation sector cannot be counted on for emissions reduction as they are either too small or can be “translated simply into cost reductions by competitive and profit-maximizing airlines, [and] are likely to lead to higher overall emissions.”

How Else Can We Reduce Aviation Emissions?

Aside from the measures already discussed, authors suggest other ways of reducing aviation emissions amongst which include things like: progressive taxes on flying, tax exemptions for low emissions aviation technology, abolishing frequent flyer programs.

And Now For The Million, Ahem, Billion Dollar Question – What About The Price Tag?

No one ever said a just transition would be free, and a transition of this magnitude – cutting aviation demands by one-half or two-thirds – will certainly require major up front investments in the billions of GBP.

Our modelling suggests an annual cost in 2030 of 9.54 bn for the Fairer Flying scenario and 9.58 bn for the Safer Climate scenario, compared to the baseline scenario.

However, these billions in investments rival the 7bn GBP in tax breaks and subsidies already being handed out to the aviation industry. The beauty of this report is that it shows the massive pay-off that redirecting governmental investments from aviation to other forms of transport and related areas could yield. Not only could funds be used for creating more jobs, but greener jobs, as well as supporting increased use of low-emissions surface transport, promoting less extractivist, more domestic modes of tourism, all while simultaneously working to meet the UK’s climate commitments. The author’s findings suggest:

So what are we waiting for? Possible show’s that we can look positively into a flight-reduced future so let’s get going!