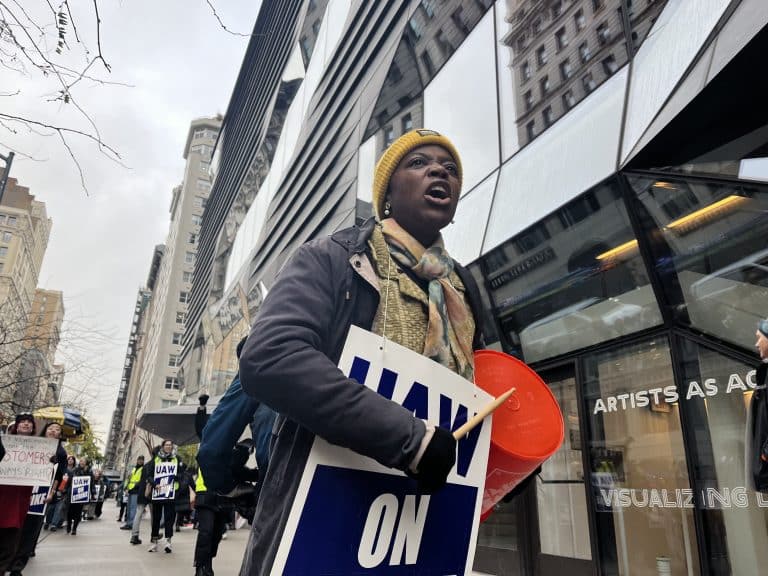 1,300 adjuncts at the new school in NYC are on strike.

This strike comes in the midst of other strikes across the country including at The University of California and Starbucks.

New York City – On Wednesday morning, more than 1,300 adjunct faculty at The New School in New York City went on strike. They were joined in solidarity by hundreds of students, full-time faculty, and community supporters. The strike comes after five months of negotiations between the administration and part-time adjunct workers represented by the UAW whose demands include a meaningful increase in wages, no cuts to healthcare, and third-party mediation for harassment and discrimination in the workplace.

Students and workers walked the picket line holding signs with slogans like: “Where is my tuition going?” and “New School, old values.” The energy on the picket line was fervent and resolute: picketers stood on benches leading chants and marched into crosswalks with signs asking cars to “honk for workers.”

Faculty and students alike are fed up with The New School flaunting its purportedly progressive values while exploiting the instructors that keep the university running. Common chants on the picket line included “social justice is not a brand” and “up with the workers, down with the bosses.”

Adjunct faculty make up 87 percent of the teaching staff at The New School, yet the administration only allocates about 8 percent of the budget for their compensation. Part-time faculty have not received a raise in almost four years and their recently expired contract has not been renegotiated in eight. Partnered with rapidly rising inflation, this frozen pay rate has resulted in an 18 percent drop in real earnings.

Despite this egregious wage stagnation, The New School has been unwilling to cooperate with faculty. In 28 bargaining sessions with the adjunct union, The New School’s administration brought wage proposals to only three sessions. Their final wage offer for adjunct faculty was a 3.5 percent raise,a much lower increase than the 10 percent immediate raise and 5 percent annual raise the union has demanded.

Additionally, adjunct faculty are currently paid per contact hour, meaning they are only paid for the hours they are in the classroom. Each hour adjunct faculty spend preparing for class, holding office hours, and grading student work is unpaid labor that The New School is profiting from.

In stark contrast to the dismal wages for adjunct faculty, The New School spends 2.3 times the national average on administration relative to instruction. This “progressive” university that uses leftist buzzwords as marketing is lining the pockets of administrators while the workers who create all of its value struggle to make ends meet.

The faculty of The New School are not alone in their struggle for more just working conditions. Weeks prior, NYU adjunct faculty won major raises through a credible strike threat. Just one day before the strike at The New School, workers across the University of California system began the largest higher-education strike in history. Over 48,000 UC workers are now on strike with a focus on winning higher wages to combat inflation.

The workers at The New School and throughout the country should be an inspiration to others. We must stand in solidarity. The wave of struggle across higher education is a moralizing and positive sign that workers are waking up to the fact that only we can ensure that the ruling class doesn’t make us pay for their crises.