Above photo: The three barrels on the right mark the location of the pipe next to the Burkes’ home.

Sep 9, 2013: Today, we are proud to launch our new series: “Landowner Stories,” which will bring you the reflections of Line 6B landowners along Phase One– in their own words! Our first installment comes from Marty and Patti Burke, who live in Oceola Township. Their house is among those in closest proximity to the new pipeline.

When I try to express verbally or in writing what the last two years has done to us both as a family and or community I become mentally/emotionally paralyzed a bit.

Lets take a look at the negative impact. For me unfortunately there still is not a single positive impact I can see here.

What has Enbridge taken from me?

That intangible feeling you have in your home that this is your place – your save haven – your central command of well being if you will. The place where you have to think it but just feel that its your place and because you have pride in it and work hard to pay for it no-one can take it from you.

2)   My trust in all levels of government from my township to the federal government.

I still struggle to understand every single day how my government, the exact people that are there paid by me to protect my rights to protect me from a foreign invader like Enbridge could have abandoned me in my hour of need. That they could completely turn their backs on me and allow Enbridge without check to take my land/condemn my home and steal part of what I’ve worked for paid for for the last 20 years. I’ve canvassed all levels of governing bodies and found out that not one including our State/county/city/TWP regulators have a requirement for minimum distance a dwelling can be from a high pressure oil pipeline? How can that be when even our lowest level of regulation (TWP) can tell you how far your pole barn has to be from your garage or how far a shed can be from a property line but they have no requirement as to how far your home must be from an oil pipeline? Well, its pretty simple if they are involved in setting precedent that could cost Enbridge money (i.e., buying homes that violate the req.) they will be sued by Enbridge and they will lose. So … you and I pay the price for it. . . sounds reasonable right.

3)  My trust in law enforcement and the court system.

When I heard on our local Livingston county radio station that Our Sheriff was allowing Livingston county Sheriffs deputies to work during their off time as contract security for Enbridge while wearing county uniforms/carrying weapons/driving county vehicles all paid for by the residents of Livinston county I just couldn’t believe it. How was this ever even considered by our Sheriffs Dept.? How could they possibly have thought this would be in the best interest of our community?

How could it be that when I called 911 to report criminal trespass (by Enbridge) on our private road (Sue Dr.) the Sheriffs Dept showed up and called the prosecutors office? The Livingston County prosecutor’s response was we wont press charges on behalf of the residents of Sue. Dr.; it’s a civil matter, and I quote “the same as someone on Sue Dr. ordering a pizza and a pizza boy driving down the road.” Yet this same prosecutor was willing to press charges against me for not allowing Enbridge on my property because the site plan they had approved in court did not match what they laid out on my property (which included temporary workspace that was 3 feet from the foundation of my home). The Sheriff’s dept came to my home three times in this time frame to convince me to comply. The last time they brought a 400 lb process server to let me know it was my last chance before I go to jail – he also reminded me that my wife could be arrested too.  I complied …. props to Enbridge ..they never lose do they? Enbridge’s response to my situation would be this – it’s a shame Mr. Burke didn’t comply with us – none of this would have occurred.

A year before Enbridge ever broke ground on the line 6B project it was a beautiful sunny afternoon when my daughter came in from our pool and said dad a couple of guys came out of the woods and are in our back yard (remember I live on ten acres – this is not a normal occurrence). I was obviously not happy with this situation and went out to confront them.

They told me they were a contractor to Enbridge hired to do 3D mapping of my property. They were two football fields north of the Enbridge easement. They were in my backyard; the line is in my front yard. This was just the beginning of an endless cycle of unannounced visits by Enbridge and their agents/contractors often times in areas of my property that they no have right to be in.

Fast forward to construction phase –  after a lengthy standoff the construction on my property commenced. Enbridge with all their prestigious Engineering savvy came to the conclusion at the last minute that they couldn’t dig the trench as close at it was planned to be to my house so they counterbored underground parallel to the front of my house under my driveway. Now at this point if I sit in my living room to chat with family/watch TV/read/work I’m looking at Enbridge workers walking back and forth in front of mu home maybe 10 feet from my windows. They can look in (and they do) and see myself and my family – heck they can see what we’re watching on TV. 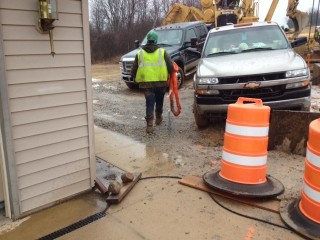 Construction vehicles and workers just a few feet from the Burkes’ home.

When I leave for work in the morning they are coming up my driveway – when I come home they are still there working – I can hear their  voices from my kitchen while my wife and I are making dinner or talking. The sound of their equipment running constantly is maddening then slowly becomes numbing over time. There is a constant resonance/vibration in my home now and I can’t stop wondering is this hurting the structure of my home?

When I go out in my garage to work on a project there are Enbridge workers outside my windows and multiple Enbridge trucks parked 5 feet from my garage.

When I look out any window of my home I no longer see the beautiful views that I’ve grown used to. I now see workers, equipment, trucks, construction debris, mounds of dirt, and large holes and hazard orange ….hazard orange everywhere.

One of the most insidious and difficult things to explain to someone not directly living this nightmare is the toll it takes on your general sense of well being. Not feeling like you’re coming home to your place of solace, instead dreading on a daily basis seeing the state of disarray your home is in. Not knowing how all of this will affect you this month, next month, or next year. Knowing you’re helpless to stop it.  Knowing it will have a negative impact on the value of your home in already trying economic times. While these things may seem small to some on a point by point basis it has a cumulative effect on a person. In general you don’t feel hopeful about the outcome. This gut feeling spreads to other areas of your life like work for instance or social scenario’s or family issues or health issues. You don’t always feel it but its there nonetheless.

Even connections we have with our neighbors are different, some are settling with Enbridge – others are not. Other ancillary issues arise that need consensus from all in the neighborhood but now this is hard to come by as the “Enridge Effect” has polarized some and alienated others altogether so coming together as a community just seems to be fractured.

I think this one has to be in the Enbridge hand book on disorientate, alienate, conquer, and divide. Props again Enbridge.

The value of my property. Think about this …When Enbridge first approached us to get us to sign off on the “Plan” they had for our property their good faith offer was $6,000.00 . They had lots of charts and monkey math to show why this was more than fair. Keep in mind we would be closer to the proposed pipeline than any other home in our area.

Within a month we started hearing that some neighbors were settling with them with zero impact to their properties other than losing trees for ten times what they offered us.

Good Faith????  Enbridge’s approach to justifying what they do or don’t pay you for loss of value to your property due to their taking and their deplorable reputation is what the industry refers to as the Utility taking of your home.

They actual told me the utility they were taking was relevant due to the fact that there was already a pipeline there. Of course, they own the pipeline that was already there and we were never compensated for taking if you will. What a strange and self convenient logic …kind of like saying I shouldn’t pay for smashing your car because it was already smashed -never mind the fact that I’m the guy who smashed it in the first place and never fixed it.

Bottom line is I’ve watched my homes value plummet while all others in my area are back on the rise. I have a nice, well maintained home on a beautiful piece of property only one issue – the new Enbridge easement now encompasses the front of my home. My home literally interrupts the north side of the easement.

For Enbridge this becomes a kind of self-fulfilling cost-save prophecy. The longer they wait to settle the less my house is worth (because of them). So the less the value of the taking they eventually pay for. The courts already allowed them to postpone my hearing date from June of this year to Sept of this year. I fully expect the court to allow them to postpone it again. It’s sheer ludicrousy. How can it be legal? How can it be happening?

How can our legal system allow a company with annual sales in the tens of billions to systematically rob individuals of just compensation? Never mind the dehumanizing effect Enbridge has on thousands upon thousand of individuals and families. They even get to offset their costs of doing business on the backs of real people, families, communities.

It truly is numbing and it truly is a nightmare. How can it happen in America? Who would let such a thing happen to us?

Who would put themselves in our shoes?