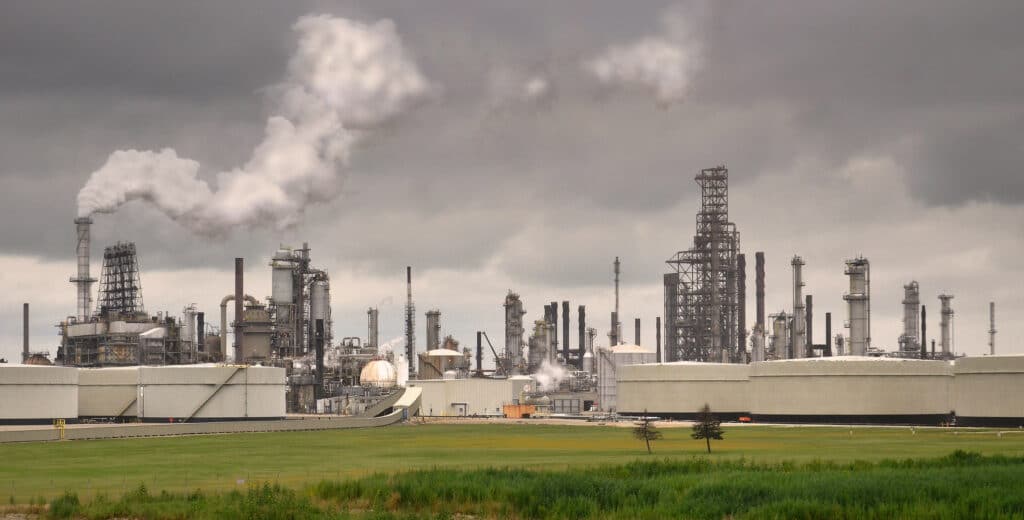 Where it’s no longer credible to deny climate change, the fossil fuel giant puts the focus on ‘risk’ and blame on consumers, in echo of tobacco industry PR, researchers find.

What’s the single word that fossil fuel giant ExxonMobil’s flagship environmental reports to investors and the public tie most closely to climate change and global warming?

According to newly published research from Harvard science historian Naomi Oreskes and Harvard research associate Geoffrey Supran, it’s a simple four-letter word, one that carries overtones not only of danger, but also — crucially — of uncertainty: risk.

Oreskes and Supran argue in the peer-reviewed study published in the journal One Earth, that by repeating that word over and over as it discusses climate change ExxonMobil continues to connect climate change to uncertainty, even in its most carefully worded and most scrutinized discussions of the topic.

That tiny word is one sign of a massive change underway in how fossil fuel companies talk about climate change in places where it’s no longer considered credible to contest climate science. Instead, Oreskes and Supran write, ExxonMobil’s statements subtly shift responsibility for climate change onto the shoulders of consumers, while avoiding the need to describe in detail the risks that are posed by climate change.

And that, for the record, is a lot to gloss over — not just in terms of what scientists predict about the future, but in terms of what climate change has already played a role in bringing about. Last year, for example, tied with 2016 as the “warmest” year on record, according to NASA — 2020 brought a brutal drumbeat of climate-linked calamities, including a record-obliterating wildfire season on the West Coast that memorably turned skies orange and red and an extraordinarily intense Atlantic hurricane season.

The way that ExxonMobil talks about climate change, the paper suggests, lets the company thread a very specific rhetorical needle, communicating two ideas that fundamentally benefit their interests. “On the one hand, ‘risk’ rhetoric is weak enough to allow the company to maintain a position on climate science that is ambiguous, flexible, and unalarming,” the researchers write. “On the other, it is strong enough—and prominent enough, in [New York Times] advertorials and elsewhere—that ExxonMobil may claim that the public has been well informed about [anthropogenic global warming].”

And if that approach feels a little familiar, maybe that’s because it’s very similar to the tactics used by another industry in the past: Big Tobacco.

“Akin to early, tepidly worded warning labels on cigarette packages, ExxonMobil’s advertorials in America’s newspaper of record help establish this claim, sometimes explicitly: ‘Most people acknowledge that human-induced climate change is a long-term risk,’ a 2001 advertorial states (emphases added),” the paper continues. “‘The risk of climate change and its potential impacts on society and the ecosystem are widely recognized,’ says another the following year.”

13/n: Here’s how an ExxonMobil advertorial on climate change in @nytimes falls apart when its denialist techniques are deconstructed. pic.twitter.com/MeNhyYhnnd

And that’s just one example of the ways that ExxonMobil’s favored ideas about climate change — ideas like “we are all to blame” or “society must inevitably rely on fossil fuels for the foreseeable future” — can become embedded in conventional wisdom and creep into how people think and talk about climate change, the paper argues.

A day late, but still reeling at the absolute gaul of this sentiment from Shell’s CEO.

Not just cause oil company bad. But because we NEEDED (past tense) Shell on climate.

When they were on the cutting edge of climate science. pic.twitter.com/TKczzThmGV

While the new paper is hardly the first to draw parallels between the fossil fuel and tobacco industries, what sets it apart is how the research was done.

“Our analysis is the first computational study illustrating how the fossil fuel industry has encouraged and embodied AGW [anthropogenic global warming] narratives fixated on individual responsibility,” the paper says. The study used automated methods to analyze 180 ExxonMobil documents, 32 previously published internal company documents, and 76 New York Times “advertorials” where the company took positions on climate change. The authors believe that these methods of efficiently reviewing a large number of company records could prove useful later in litigation, where larger batches of documents may need review.

The number of climate liability lawsuits worldwide and in the U.S. continues to grow. A January 2021 United Nations report tallied 1,200 cases in the U.S. and 350 other lawsuits in nearly 40 other jurisdictions worldwide — nearly double the number of lawsuits underway three years ago by the report authors’ count. Not all of those cases involve ExxonMobil — but some of the highest profile lawsuits include those filed by state attorneys general and state and local governments alleging that the company misled investors or consumers or others.

Supran and Oreskes have both assisted with legal briefs or served as expert witnesses in climate liability cases, but in an email to DeSmog, Supran noted that virtually all of that work has been done pro bono (with the sole exception that Oreskes once billed 3.5 hours for her work reviewing the historical accuracy of allegations in one 2017 case). Supran called their work and testimony in climate liability cases “a logical application of our knowledge and expertise.”

ExxonMobil did not respond to a request for comment about their study from DeSmog.

As it has become less credible to contest the legitimacy of climate science, the paper notes, the company has shifted its rhetoric on climate to focus on “risk.”

“In ExxonMobil Corp’s 2005 Corporate Citizenship Report, for instance, which extensively questions whether AGW is human caused and serious, a member of the public [is quoted asking]: ‘Why won’t ExxonMobil recognize that climate change is real…?’,” Oreskes and Supran write. “The company replies: ‘ExxonMobil recognizes the risk of climate change and its potential impact’ (emphases added).”

That subtle shift lets ExxonMobil “inject uncertainty” into conversations about climate change, the paper continues, “even while superficially appearing not to.”

“We have also observed that, starting in the mid-2000s, ExxonMobil’s statements of explicit doubt about climate science and its implications (for example, that ‘there does not appear to be a consensus among scientists about the effect of fossil fuel use on climate’) gave way to implicit acknowledgments couched in ambiguous statements about climate ‘risk’ (such as discussion of lower-carbon fuels for ‘addressing the risks posed by rising greenhouse gas emissions,’ without mention of [anthropogenic global warming]),” the paper reports.

It’s also a way of talking that also lets ExxonMobil leave out any description of what, exactly, is being put at risk, the paper notes.

The company’s public messaging pits clear-cut descriptions of the benefits of using fossil fuels against the risks of climate change — but while it offers examples of the ways people find fossil fuels useful, ExxonMobil is a lot more vague about what, exactly, the risks associated with climate change are, the paper argues.

Communications strategies similar to those described in Oreskes and Supran’s new research have drawn pushback on Twitter.

That’s not for a lack of available scientific data. “Today, we are at 1.2 degrees of warming and already witnessing unprecedented climate extremes and volatility in every region and on every continent,” U.N. Secretary General António Guterres said in a December 2020 address. “The science is crystal clear: to limit temperature rise to 1.5-degrees Celsius above pre-industrial levels, the world needs to decrease fossil fuel production by roughly 6 per cent every year between now and 2030.”

The biggest remaining questions about climate change don’t concern the ways that our lives will be increasingly disrupted by extreme weather, wildfires, rising seas and the like. There’s a strong body of scientific evidence that lets scientists make good predictions about what happens when we collectively burn fossil fuels at different rates. And a peer-reviewed study published last year in the journal Geophysical Research found that climate models dating back to the 1970s through 2007 have proved remarkably accurate

The biggest open questions are about policy and products, not about what the science shows.

The real source of uncertainty, in other words, is how long we will continue doing the things that cause climate change.

Polling shows that Americans’ understandings of climate science have shifted dramatically in recent years. In 2014, NBC News recently reported, less than half of Americans polled believed that climate change was caused by human activity. Polls from 2020, however, show that now 57 percent of Americans cite human activity as causing climate change, a jump of roughly ten percent.

But there may still be times and places where not only is discussion of risk familiar and habitually framed in terms of risk management, but also where ExxonMobil’s framing might find a particularly receptive audience.

Asked by DeSmog, Supran said that investors may be particularly vulnerable to what he called ExxonMobil’s “fossil fuel savior” framing.

“Within this frame, the company is an innocent supplier, simply giving consumers what they demand. That is, ExxonMobil are the good guys who we should trust to address the climate risks that we, the public, brought upon ourselves,” he said. “It’s also worth noting that these modern forms of propaganda are increasingly subtle and insidious, and so being exposed to them ad nauseam, as shareholders are, could make them more vulnerable to this ‘discursive grooming’.”

Going forward, the new paper predicts that companies like ExxonMobil may continue to rely on the strategies developed by the tobacco industry.

“In their public relations messaging, industry asserts smokers’ rights as individuals who are at liberty to smoke,” the paper says. “In the context of litigation, industry asserts that those who choose to smoke are solely to blame for their injuries.”

“ExxonMobil’s framing is reminiscent of the tobacco industry’s effort ‘to diminish its own responsibility (and culpability) by casting itself as a kind of neutral innocent, buffeted by the forces of consumer demand,’” it continues. “It is widely recognized that the tobacco industry used, and continues to use, narrative frames of personal responsibility—often marketed as ‘freedom of choice’—to combat public criticism, influence policy debates, and defend against litigation and regulation.”