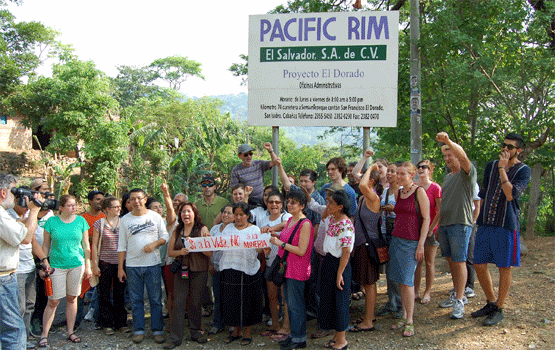 As the Obama administration negotiates new trade agreements with European and Pacific nations, a battle has emerged over the agreements’ egregious rules that grant giant corporations unreasonable powers to subvert democracy. These rules, dubbed “investor rights” by the corporations, allow firms to sue governments over actions—including public interest regulations—that reduce the value of their investments.

Oxfam, the Institute for Policy Studies, and four other non-profits are releasing a new study that explains why these rules are so dangerous to democracy and the environment. We are among the co-authors of this study, titled “Debunking Eight Falsehoods by Pacific Rim Mining/OceanaGold in El Salvador.” The report offers a powerful case study of everything that is wrong with this corporate assault on democracy.

“Debunking Eight Falsehoods” is a careful refutation of the arguments of a giant Australian/Canadian mining firm, Pacific Rim/OceanaGold, that is suing the government of El Salvador over that government’s decision to stop issuing new mining licenses. The Salvadoran government did this precisely because its citizens deemed the environmental and social costs too high. Pacific Rim’s proposed gold mine was in the fragile and already compromised watershed of the key river that supplies water to over half the country’s people.

Pacific Rim/OceanaGold is, according to a 2013 IPS study, one of 31 oil, gas, and mining corporations suing governments in Latin America in the International Centre for the Settlement of Investment Disputes (ICSID), based at the World Bank. ICSID is the most frequently used tribunal under existing pro-corporate, anti-democratic trade and investment rules.

Groups such as Oxfam, the Council of Canadians, and MiningWatch Canada that are releasing the study feel that this case should be a “poster child” of what is wrong with such existing rules and why trade agreements incorporating such rules should not be passed. The study shows how corporations use their 1% muscle (and threats of suits) to attempt to force governments into giving them mining licenses. If this doesn’t succeed, then they file the suits at ICSID and then attempt to distort reality to justify their view of why their rights to mine must prevail.

For example, the “8 Falsehoods” study details how Pacific Rim/OceanaGold, soon after filing its suit, attempted to paint its opponents as “rogue” NGOs that are “anti-development.” Yet, the reality is that El Salvador’s decision to stop issuing new mining permits came after strong public outrage over the devastating impacts of mining. As the study reveals:

–          The highest echelons of the Catholic Church publicly came out against mining.

–          The government’s office of Ombudsman for Human Rights opposes mining.

In other words, as the study stresses, the groups inside and outside of El Salvador opposing the mining are anything but “rogue.” Moreover, the “rogue” label used by Pacific Rim/OceanaGold is reckless amidst the conflict that Pacific Rim’s proposed mine has brought to the area. Indeed, since 2009, at least four people opposed to mining have been assassinated in the area where the company wants to mine.

The study also refutes Pacific Rim/OceanaGold’s claim that it went above and beyond the guidelines required for mining permits back when the government was still issuing them. Instead—and this should be key to the World Bank-based tribunal hearing the case—our study found that the firm never completed or submitted a feasibility study, nor did it ensure it had purchased ownership or authorization to use the surface land over the proposed mine. Rather, Pacific Rim relied on lobbying government officials to try to get the permit.

The study’s authors contend that for those concerned with democracy and basic rights, this El Salvador case stands as a potent reminder of how important it is that we fight such unjust corporate lawsuits. It is vital not only to support the people in El Salvador and other countries under assault, but to rally the groups and governments trying to halt new trade and investment agreements built from this same cookie-cutter mold. The governments of Chile and other countries are already raising critical questions about these pro-corporate rules in the proposed Trans-Pacific Partnership (TPP). Social movements in several European nations are making common cause with their governments in raising similar concerns in the trans-Atlantic talks. The Pacific Rim/OceanaGold case is an advertisement of the dangers of such rules.

As we write these words, the Canadian mining company Infinito Gold has filed a suit (again in the World Bank’s ICSID) against the government of ecotourism powerhouse Costa Rica. Infinito claims that Costa Rica’s executive, legislative, and judicial branches are all incorrect in banning open-pit mining and denying the corporation a license.

It is time to stop the expansion of undemocratic agreements and support the governments that are seeking alternatives that respect their sovereignty, their peoples’ rights, and their environment.