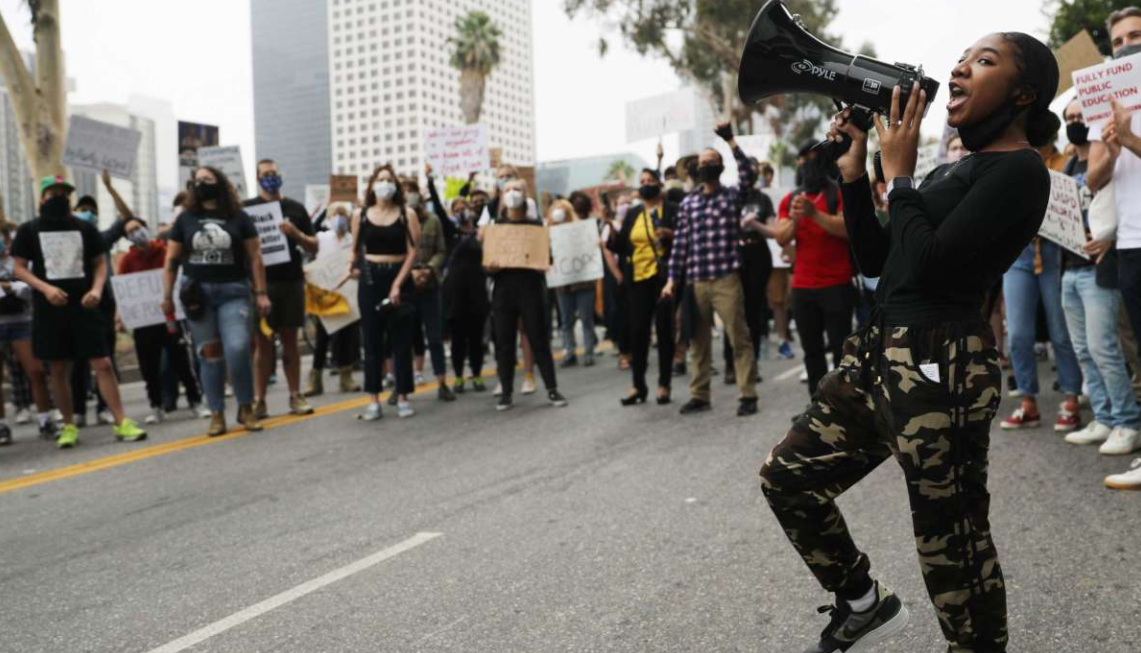 New Toolkit To Defund The Police

Above photo: Black Lives Matter-Los Angeles supporters protest outside the Unified School District headquarters calling on the board of education to defund school police on June 23, 2020, in Los Angeles, California. Mario Tama/Getty Images.]

NOTE: Popular Resistance does not view the events of January 6, 2021 as a coup attempt, as this article states. In addition, while efforts to shift funds from police budgets to community needs are laudable, Popular Resistance believes policing as it exists must be abolished and communities should have control over how they create security. This is consistent with our support for a People(s)-Centered Human Rights agenda.  – MF

In June of 2020, Interrupting Criminalization, an initiative I co-founded in 2018 with Mariame Kaba, later joined by Woods Ervin (now Communications Director at Critical Resistance) and Eva Nagao, released a toolkit collecting and summarizing demands to defund police emanating from the frontlines of the 2020 mass uprising against anti-Black police violence and abandonment of Black communities to the devastation of the coronavirus pandemic and the economic crisis it precipitated. The original toolkit also pointed to strategies communities are already using to stay safe without police, and named potential pitfalls on the path to genuine and lasting community safety. Since then, we’ve been in communication with groups across the country organizing to advance defund demands, and, where possible, creating tools to support their efforts, including a report Mariame drafted and edited entitled What’s Next: Steps Toward a Police Free Future, and a fact sheet on defund and domestic violence.

What follows is the introduction to our recently released report entitled The Demand is Still #DefundthePolice #FundthePeople #DefendBlackLives updating our original toolkit to reflect some of the victories, key strategies, and lessons learned by organizers across the country over the past six months, as well as key questions, tricks, tensions, and roadblocks ahead as we enter into the 2021 budget season under a new federal administration committed to pouring MORE, rather than less, money, legitimacy, power and equipment into police while resisting investments in universal health care, education, rent and debt forgiveness, and long term and adequate income and other supports for Black, Indigenous and migrant communities ravaged by the pandemic and economic violence.

One thing is clear as we move through each more devastating phase of the coronavirus pandemic, a looming eviction and foreclosure crisis, and record unemployment, and food and housing insecurity as winter sets in across most of the U.S.: The demand is still, more than ever, #DefundThePolice, #FundThePeople #DefendBlackLives.

Over the past eight months since George Floyd was choked to death by the Minneapolis Police Department, demands to defund the police emanating from Minneapolis spread like wildfire, echoing in the streets, in petitions to policymakers, and in the testimonies of thousands of people calling and writing in to virtual council chambers. Calls to defund police and invest in communities were not only a response to the ongoing murders of Black people like Floyd, Breonna Taylor, Tony McDade, and the hundreds of others killed by police every year. They were also a manifestation of outrage at the ongoing abandonment of Black, Indigenous, migrant, unhoused, disabled, and low-income communities to the ravages of a deadly pandemic, an unprecedented economic crisis, and catastrophic climate change, while billions of dollars continue to be poured into the coffers of police who criminalize, control, and cage, instead of into community care, support, and safety.

In the wake of the right-wing white supremacist storming of the Capitol and attempted coup on January 6, 2021, the demand to defund police is more urgent than ever. There is growing evidence that many federal, state and local law enforcement officers, including Capitol Police, participated in, facilitated and condoned the events of January 6th — including video footage of Capitol police removing barricades to allow white supremacists onto Capitol grounds, standing aside as they entered the building while denying entry to journalists, taking selfies with insurrectionists and directing people who intended legislators harm to their offices. The events of January 6th were not a justification for increased policing, they were a perfect encapsulation of the reality that policing does not keep us safe — including from white supremacists.

Our response to white supremacist violence cannot be to pour still more resources into police who have repeatedly been shown to participate in and condone it, especially as the pandemic claims record numbers of lives each day and the unprecedented economic crisis deepens, leaving more and more people at risk of eviction, hunger, and violence. Nor can it be to give police more power to fight “domestic terrorism,” which will predictably be used against the very same communities currently targeted by police — for instance, a number of states have already used the attempted coup and threats of more white supremacist violence to resurrect laws first introduced to suppress #BlackLivesMatter protests. It is more imperative than ever to reduce the funding, power, weaponry, and reach of law enforcement agencies that have made it abundantly clear through their actions leading up to and on January 6th that what they are committed to protecting is a white supremacist status quo, not the safety of Black and Brown communities.

The demand to defund police did not arise in a vacuum. It is rooted in a long legacy of challenges to white supremacist violence, and demands to end institutions created to control, regulate, disempower, and suppress Black communities, and for collective investment in meeting community needs through collective care. It echoes the demands of the Black Panther Party’s 10-point platform for Black Liberation: “We want an immediate end to POLICE BRUTALITY and MURDER of Black people…. We want land, bread, housing, education, clothing, justice and peace.” It is rooted in a central demand of the Movement for Black Lives’ Vision for Black Lives, first launched in 2016 in the wake of the Ferguson Uprising: “Invest/Divest — We demand investments in the education, health and safety of Black people, instead of investments in the criminalizing, caging, and harming of Black people. We want investments in Black communities, determined by Black communities, and divestment from exploitative forces including prisons, fossil fuels, police, surveillance and exploitative corporations.” The BREATHE Act, birthed by the Movement for Black Lives in 2020 in response to legislation and policy proposals advancing superficial reforms that do nothing to address the root causes and systemic nature of police violence, represents a federal legislative articulation of the Invest/Divest framework.

Over the past six months, organizers across the country have won significant victories in campaigns to reallocate funds from bloated police department budgets to meet community needs. They extracted over $840 million from police departments, and secured investments of at least $160 million in communities. They removed cops from schools in over 25 cities, saving an additional $34 million for investment in meeting student and community needs. They have engaged more people than ever in conversation around defunding police departments as a pathway to achieving genuine and lasting public safety by meeting material needs and resourcing and building community-based safety strategies, and to eventually abolishing policing altogether. They have faced and overcome significant resistance from police fraternal associations, pro-police lawmakers, and reformists whose proposals to tinker with the mechanisms of policing while leaving its foundations untouched have been wielded as a wedge to discredit their demands. They have wisely tuned out willful misrepresentations and dilutions of defund demands by political pundits and mainstream media outlets and stayed true to their vision. And they have learned valuable lessons to guide next steps in continuing campaigns to #DefundPolice.

Even as demands to defund police are being dismissed and attacked by Democratic Party leadership and others invested in maintaining existing systems of power and policing as shallow, nonsensical, ill-advised, contrary to the interests of Black communities, out of touch with popular opinion, “off message,” and unpopular among focus groups, communities are continuing, undeterred, to fight for — and win — divestment of funds, power, and legitimacy from police and other institutions that kill, maim, and violate Black, Indigenous, disabled, queer, and migrant people while looting resources our communities need to survive, and investment in strategies that will achieve genuine and lasting safety.

As the Dream Defenders put it in a toolkit they also released last summer, “There’s a shift happening right now. The call to defund police is louder than we’ve ever heard it. We can all answer the call and reshape what our communities look like.”