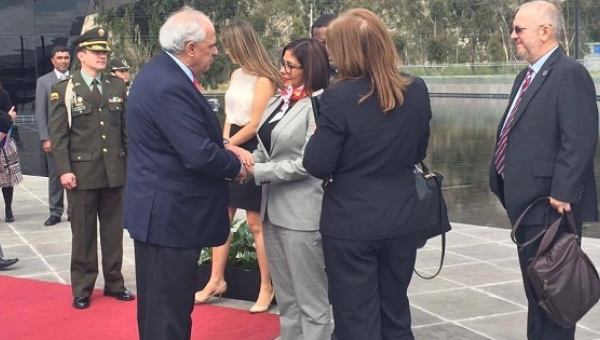 Both the outgoing pro tempore presidency and the incoming spoke of the grave external factors affecting the region.

Venezuelan Foreign Minister Delcy Rodriguez paid a tribute to the Ecuadorean people saying that with solidarity UNASUR accompanies “the wounded souls” of the thousands of victims left behind by April 17’s 7.8 quake and the despair and fear caused by over 700 aftershocks since as she took over the pro tempore presidency of the 12-nation South American integration bloc.

But Rodriguez also spoke of the other tragedies affecting the region which are violent attacks against “the sovereignty of the countries of UNASUR, who only nine years ago recovered from lost decades of no unity and having forgotten the ideals of our liberators,” such as Simon Bolivar.

“Before UNASUR, the region lost decades during which imperialist forces tried to thrust us back to the dark ages … but this does not mean that we face huge and terrible attempts against the sovereignty of our nations,” Rodriguez said.

“Since UNASUR was founded nine years ago (April 17, 2009), our countries have been able to strengthen regional integrational efforts that today allows our nations to defend and protect our sovereignty without needing to resort to the north,” she said referring to the United States, who has historically been undermining the development and progress of all countries south of their border.

Having said this, Rodriguez said the moving forward, UNASUR’s most important priority will be to continue strengthening the region’s integration to better defend itself from external interventionism.

Before her, the Uruguayan Foreign Minister Rodolfo Nin Novoa, who after 14 months of heading UNASUR handed over the pro tempore presidency to Rodriguez, spoke of differences still notable among the bloc’s nations, but praised the integrational progress achieved in the region.

He also spoke of the success UNASUR has had in addressing foreign meddling in the regions sovereignty, and specifically recalled a recent bloc meeting where a joint statement was agreed to condemn U.S. President Barack Obama’s decree “absurdly” declaring Venezuela a threat to the national security of the United States.

“We at UNASUR have shown deep solidarity and this has been confirmed through various meetings in which UNASUR expressed profound unity against the United States and more specifically against the decree by which President Obama called Venezuela a threat to his nation,” Nin Novoa said.

However, he accepted their are still differences within UNASUR that need to be worked out as to further the integration process which began in 2007.

“We are, however, showing deep progress in integration in a constantly more efficient and satisfying way,” the Uruguayan diplomat added.

He spoke of 593 regional agreements reached in 2015 and of 31 infrastructure projects that will boost the finances, economies, democracies and productivity of the entire UNASUR zone.

Nin Novoa highlighted the strengthening of regional defense programs, as well as educational, energy, agricultural, cutural, political and infrastructure plans that were agreed since Uruguay took over the pro tempore presidency of UNASUR in December 2014.

Both Rodriguez and Nin Novoa hinted where UNASUR is headed in the near future, including a more intense approachment to other regions of the world rather than the traditional dependency to the U.S. and its allies.

“We have been strengthening our relations and our activities with nations in Africa, Asia and the Arab world,,” Nin Novoa said.

UNASUR Secretary General Ernesto Samper expressed his condolences to the people of Ecuador, but also to those in Uruguay and Chile.

“We have very closely lived the drama of the Ecuadorean people, but also the tragedies that hit Chile and Uruguay,” which were hit last week by massive torrential rains that caused floods in both countries leaving behind a trail of death, destruction and victims, said Samper.

Samper also spoke of the regional defense system that has been a priority for the 12-nation bloc, while emphasizing the need to have a multinational military force to defend UNASUR countries from external threats. He did not go further into detail.

But he did highlight some of the region’s most successful achievements, such as pulling over 180 million people out of poverty.

“UNASUR can feel profoundly satisfied with the achievements reached … up till about a year or so ago, our region had the greatest combined economic growth average, which was 6 percent, we pulled over 180 million people out of poverty … but now we are facing crises that will likely block our countries from reporting any economic growth this year.” he regretted.

In light of this, Samper said the UNASUR countries are efficiently working in favor of jointly facing the issues the region is facing.

“We have many regional projects underway and many others in a highly advanced stage … we are working on ways to increase productivity, improve infrastructure among our countries as to increase trade and other forms of cooperation,” Samper said.