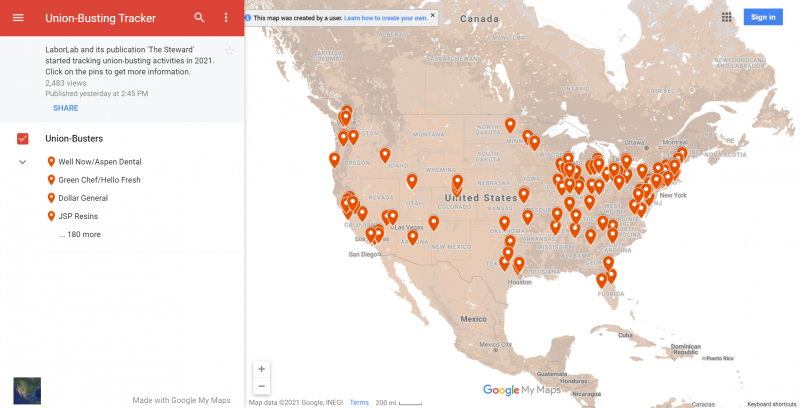 The project is intended to “embolden” workers, says Bob Funk, who founded the LaborLab.us Website, which opened on May 1.

“A shocking amount of young workers think unions are illegal and don’t know their rights,” says Funk, who by day is communications director for a Montana union. “The union-busting industry takes advantage of people’s lack of knowledge.”

The group’s volunteers, union members from around the country, combed through LM-20 forms, which union-busting companies are required to file with the Department of Labor when employers hire them. They posted what they found on the Union-Busting Tracker site, on a map of the United States with digital pins users can click on to get details and see the forms.

Those employers range from behemoths like Amazon to smaller employers such as a Manhattan arts-education program.

Amazon hired Rock Creek Consulting LLC of Twin Falls, Idaho, in late January, as workers at its warehouse in Bessemer, Alabama were preparing to vote on whether to join the Retail, Wholesale and Department Store Union [RWDSU]. Rock Creek outsourced the two-month gig to Russ Brown of Road Warrior Production in Satellite Beach, Fla. Its purpose, as stated on the form, was “to persuade employees to exercise or not to exercise, or persuade employees as to the manner of exercising, the right to organize and bargain collectively through representatives of their own choosing” — specifically, “education” on the mail-in ballot process and the National Labor Relations Act.”

In practice, that education meant the usual captive-audience meetings with workers, telling them that if the job was unionized, they’d have to pay dues; that a union contract might leave them with less money and benefits; and, according to the RWDSU, threatening to close the warehouse.

The Arkansas-based trucking company JB Hunt Transport Services was explicit about what it hired Nolslen & Associates, LLC, of Blackwood, N.J., to do when International Association of Machinists Lodge 947 was organizing 25 mechanics and technicians at its facility in South Gate, Calif. Beginning Oct. 25, Nolslen paid Peter List of Kulture Consulting of Pawleys Island, S.C., $281.25 per hour “plus actual and reasonable expenses.”

According to the form, List traveled to South Gate, where he “conducted research regarding pertinent current atmosphere; presented classes to employees to educate them regarding union card-signing tactics, the role of the NLRB and employees’ Section Seven rights; engaged in one-on-one interactions with employees; met with management and participated in conference calls.”

List and Kulture Consulting got paid $2,625 a day plus expenses when hired by Linda Inez Consulting of Charleston, S.C. in early September to counter an organizing drive by UNITE HERE Local 23 at the meal-kit company Hello Fresh/Green Chef’s facility in Aurora, Colorado. The firm has also worked for Whole Foods.

List, Kulture’s founder and CEO, declares on the firm’s Website that “unions are a by-product of a bad relationship and can devastate a company and its employees.”

“We know their playbook,” says Funk. But the players and their reach are less well known.

The major players, he says, include Kulture; LRI Consulting Services, Inc., of Broken Arrow, Okla., which brags that it “literally wrote the book in countering union organizing campaigns”; and the New York-based Jackson Lewis law firm. But Jackson Lewis, he says, regularly takes advantage of an exemption in the Labor-Management Reporting and Disclosure Act, the law that requires the LM-20 forms: It doesn’t have to file them if it’s only “advising” an employer on how to stop a union, as long as it’s not directly talking to employees.

The Department of Labor tried to close that loophole in 2016, with what is called the “persuader rule,” on the grounds that the advice’s ultimate purpose was to persuade workers to reject the union. That change was blocked by a court injunction, and the Trump administration rescinded that in 2018. President Joseph Biden promised to revive the persuader rule during his 2020 campaign, but his administration does not appear to have taken any further action beyond briefly considering it earlier this year.

Smaller employers have also hired these firms. Last February, Studio in a School NYC, which provides professional artists to teach classes in schools from pre-kindergarten through high school, hired Greer Consulting of St. Louis to discourage the artists from joining United Auto Workers Local 2110, the Technical, Office and Professional Union. It failed.

In April, the exclusive Latin School of Chicago, facing organizing by the Illinois Federation of Teachers, hired a local union-busting firm, Government Resources Consultants of America. The prep school’s faculty voted to join the IFT in June.

LaborLab, says Funk, has found the use of union-busting firms common at warehouses, not just Amazon’s; the SYSCO food-distribution company; and at marijuana dispensaries — including The Verb Is Herb in Easthampton, Mass., which hired the California-based CCG Group for a week in April while United Food and Commercial Workers Local 1459 was organizing. The union lost by a 4-3 vote.

“Most horrifying is the number of hospitals trying to bust nurses’ unions,” Funk says.

In May 2020, Mission Hospital in Asheville, N.C., hired Quality Labor Solutions of Los Angeles to “inform employees of their rights” while National Nurses United [NNU] was trying to organize the 1,800 nurses there. But the nurses, angered by staffing cuts and layoffs after the HCA Healthcare chain took over the hospital in February 2019, voted in favor of the union by a margin of more than 2–1 in September 2020 — in what NNU called the largest election win at any nonunion hospital in the South since 1975.

Funk says a LaborLab survey found that more than 60% of workers under 40 felt more empowered when they learned about their rights to have a union under Section 7 of the National Labor Relations Act, and the group gets emails every day from people asking how to contact a union. The Union-Busting Tracker’s tactic, he adds, is to give people access to the “source points” without the legal jargon.

LaborLab is soliciting donations, but Funk says it’s still an all-volunteer “passion project.” Its long-term strategy, he adds, is a combination of “shaming the employers” who hire union-busting firms and “exposing how the industry works.”