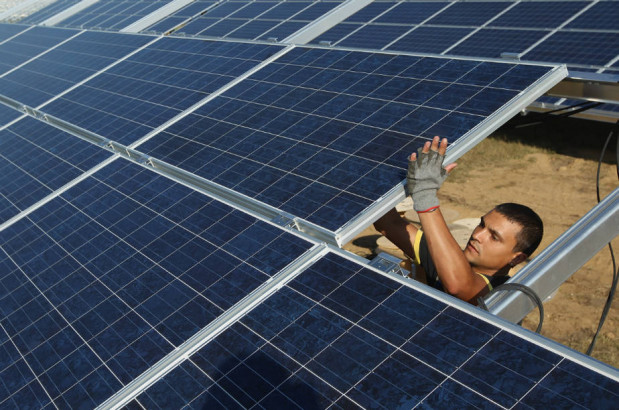 New York Building The Renewable Energy Grid Of The Future

This is a story of ripping up old incentives that encouraged selling as much electricity as possible, then unleashing the entrepreneurs.

New York State is making a $5 billion bet that by making its power cleaner, it can become a magnet for the clean energy jobs of the future.

Its efforts stand out among the many states racing to integrate more renewables into their power grids—such as Massachusetts, Hawaii and California—not necessarily for the technology but because of what’s happening behind the scenes: New York has launched a Herculean effort to turn around an antiquated system that has deterred innovation for generations by rewarding utilities for selling more electricity.

To get utilities to embrace a changing electricity system, the state is establishing ways for the companies to be reimbursed for some of the savings from energy efficiency programs that are reducing demand for their services. It also is allowing them to reap more return on their investments in equipment needed to bring more renewable energy into the grid. And it is investing in entrepreneurs who are inventing the technology to make it all work.

The state is so gung-ho that its rules require utilities to come up with demonstration projects that test out a new business model, in partnership with at least one private sector company.

The result, say the state’s regulators, is that New York is already attracting hundreds of innovative companies of all stripes. The plum opportunities are not only in installing wind turbines and solar panels, which are generating new employment opportunities across the country, they are also in emerging technologies related to smart grid management and storage. These jobs are largely invisible to the public and, in some cases, didn’t even exist a few years ago.

While the state hasn’t yet projected overall how many jobs are in the new energy economy, they have released enticing tidbits. In January, the New York State Energy and Research Development Authority (NYSERDA) released a report projecting that by 2030, New York’s energy storage industry could realize annual revenues between $5.6 billion and $8.7 billion, with total job growth between 17,300 and 26,800 employees. Jobs in the energy storage industry already grew by 30 percent between 2012 and 2015 to 3,600.

“We are now the leading market for energy storage companies,” boasts John Rhodes, president and CEO of NYSERDA, pointing to companies like NOHMs Technologies in Rochester and BessTech in Troy. “And probably microgrid technology as well.”

One of the companies that has been drawn to New York’s new markets is Opus One Solutions. New York’s vision relies on distributed, independent power operations that ramp up and down with the intermittent sunshine and wind, as well as with the fits and starts of demand for power. Opus One has software that can understand how those waves of power from distributed resources interact with traditional power flows. Just as important, its software can make real-time price estimates for the value of those local power sources.

“Why New York?” asks Alison Smith, the start-up’s director of markets, gazing out at the Manhattan skyline from a conference room at the Urban Future Lab, a state-sponsored incubator for start-ups.

“It is the most forward-thinking state in North America in considering how we build the critical elements of a distributed grid,” she answers.

Three years ago, New York announced that it would spend $5.3 billion toward meeting its goal of having 50 percent of its electricity come from renewable sources by 2030. (The state only had 24 percent renewable generation in state this year.) Mandates related to these standards have resulted in significant additions of wind and solar to the grid—but that is just the most readily visible part of the changes New York is undergoing.

According to Richard Kauffman, the state’s chairman of energy and finance, it didn’t take long to figure out that “New York cannot cost effectively make this transition just by bolting wind and solar onto the grid of Westinghouse and Tesla,” referring to two of the original creators of the grid, George Westinghouse and Nicola Tesla. Instead, New York wants a new “hybrid grid” that integrates intermittent and distributed resources like wind or solar or microgrids.

At the core of the problem to getting that grid was a stodgy, legacy financial model for utilities that didn’t support innovation. Utilities have historically been rewarded with 9 percent rate increases when they add capital expenditure for transmission and distribution to new central power stations, which in New York are historically gas and coal with some nuclear and hydro. The result is that New York has added so much base load capacity to meet peak demand (largely in these traditional forms of energy generation) that on an average day the state uses just 54 percent of generation capacity.

“Technology is not what is holding us back,” said Kauffman. “Could I tomorrow install smart meters in every home and save energy? Absolutely. But until now, there has been absolutely no financial incentive to do this.”

So, New York began changing regulations to reward utilities for integrating new business models that support advances like battery storage that are needed to scale up wind and solar. It has mandated the demonstration projects. Seventeen are already up and running and another dozen or so are in the works for approval.

It is also offering other stimulants such as grants and assistance through incubators like the Urban Future Lab.

Every few weeks, the state announces another competition. In February, it gave $15 million to develop renewable heating and cooling technology. In March it gave $11 million in grants to winners of a microgrid contest. In April it made $15.5 million available to support the most promising energy storage projects.

New York is distributing this money with the idea of leveraging as much from the private market as possible. Since 2009, NYSERDA says, it has invested $14 million in six clean energy incubators where clean tech start-ups get a boost by being connected to utility officials and investors. The return to the state on that $14 million investment: 155 of the new and emerging companies coming from those incubators have attracted over $284 million in private investment.

There is broad consensus that New York’s financial game plan is particularly sophisticated in theory. “New York is not the only one grappling with grid modernization,” said Lisa Frantzis, a senior vice president with Advanced Energy Economy, a business group working on alternative energy. “I can tell you that many states are dealing with the same issues but no one is dealing with it as holistically as New York.”

However, some clean energy advocates are not sure if the execution yet meets the ideals of the plan.

Jamie Howland, director of the Climate and Energy Analysis Center at the Acadia Center, an advocacy organization, said this is all still a work in progress. “It is going to take some time to know how well it’s working.”

In Buffalo, from Hospitial to Clean Energy Producer for the Region?

The partnership between Opus One and National Grid is a prime example of how the new demonstration model is supposed to open up New York’s power grid to innovation that speeds renewable energy.

Last year, the company was looking to aggressively expand operations out of Canada and into the United States. The key was to find a home base with utilities that were both able and willing to integrate radical new technologies.

For the highly regulated industry, it was a tall order. But because of those mandates that utilities partner with third parties, New York fit the bill.

And, in fact, no sooner had Opus settled on New York State than it was picked in September 2016 by National Grid, the utility for greater Buffalo, to partner on a two-year project on cutting-edge technology that could help Buffalo Niagara Medical Campus expand its back-up energy supply to include an expansive portfolio of renewables.

With seven institutions on 120 acres and 17,000 employees, the medical campus is practically a small town. Like all critical care facilities, BNMC is required by law to have a backup power generation system, and like many hospitals, it has relied on one of the dirtiest forms of fuel: diesel.

As BNMC considers how to upgrade its power structure, one option is to invest beyond its own needs and become a clean power producer for the local region.

“There is no doubt to us now that the technology is out there to provide energy from zero-emissions sources,” said Paul Tyno, director of energy investments for BNMC. “The question is the economic feasibility of it.”

“We need to know what kind of return we will get for our investments,” he said.

This is where Opus One comes in. Opus can take just a few limited pieces of information from the grid and, using advanced computer modeling, show comprehensive power flows in real time—as well as accurately predict them in the future.

The transparency also allows Opus to calculate demand for supply and then come up with prices for energy based on where it is being distributed. This is potentially a big breakthrough. One of the problems states like California and Nevada have faced is that they have not yet calculated what they should be paying individual customers for the solar power they generate.

National Grid asked Opus to work on a demonstration project with BMNC to provide a model of a real-time market for its distributed clean power.

“This demonstration is essential in providing us with a better understanding of the technical requirements required to integrate, operate and fully optimize a distributed system,” said Carlos Nouel, vice president of National Grid’s New Energy Solutions group.  If it works, he added, there is potential to scale to the entire area.

Tyno said that New York’s insistence on pilot projects is the foundation of all this experimentation.

“To me, the ability for a customer asset to provide relief to the central grid strengthens that central grid,” he said. “If you’ve got a strong grid that is consistent and reliable and has manageable costs in this day and age, I think you are going to attract business to your area.”