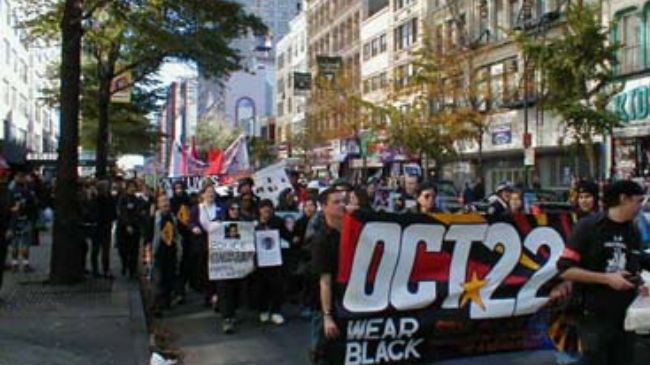 Rallies against policy brutality were held throughout 30 U.S. cities last Tuesday, according to the event organizers.

Recent victims of policy brutality in New York City included 37-year-old Kyam Livingston from the West Indian neighborhood of Flatbush, who died in a Brooklyn jail cell in July after complaining about stomach pains for several hours without receiving medical attention.

“Time and time again, police brutalize and kill people and continue to walk away. So that creates a climate where brutality is okay, and it’s accepted and it’s covered up,” said Daniel “Majesty” Sanchez, an activist and hip-hop artist who hosted a know-your-rights workshop at Tuesday’s rally in NYC.

A 2012 study by the Malcolm X Grassroots Movement found that a person of color is killed by the police, a vigilante, or a security worker every 36 hours.

In the latest in a spate of deaths at the hands of the New York Police Department, 37-year-old Kyam Livingston from the West Indian neighborhood of Flatbush, died in a Brooklyn jail cell in July after complaining for several hours of stomach pains without receiving medical attention.

VOICEOVER: Livingston’s survivors filed a wrongful death suit against the city Monday. They they are also seeking evidence that the city has so far refused to provide, including security camera footage and the names of police and corrections officers involved.

NEAL: She was arrested for a minor incident, waiting to see the judge. Her stomach started aching. You’re in a closed place with 15, 20 other people. She got sick, begged for help. All fifteen of the other girls, sixteen or whatever, banging, asking for help. No one came to her aid. She died. And she shouldn’t have.

My daughter was a good girl. She worked. She was happy, as you can see.

Her birthday was coming up on July 29, which–this took place instead, her funeral.

VOICEOVER: Two days earlier, a posthumous birthday party was held for another slain Flatbush resident, Kimani Gray. Witnesses say the teen was unarmed when he was shot seven times by undercover officers in March on East 52nd Street in Brooklyn.

FEMALE FRIEND OF KIMANI’S, ADDRESSING CROWD: I just want to say happy birthday. I miss you. It’s your 17th birthday. And every year we’re going to have something for you no matter what. And the Fifties love you. I love you. G love you. TK love you. We all love you.

SHOUTS FROM CROWD: We all love you.

CAROL GRAY, KIMANI’S MOTHER: No we’re not going home. We got stuff to do out here.

UNIDENTIFIED: We’re not leaving though. [incompr.]

POLICE OFFICER: You, take a walk over there.

MEMBER OF CROWD: Thank you for what?

POLICE OFFICER: I said thank you for the history lesson.

MEMBER OF CROWD: Yeah. So that means nothing to you. You glad, you glad that he’s dead, right? Listen.

GRAY: [incompr.] we celebrate my son’s life. You already take it. For more than once. Y’all took his life. You all not going to hurt his fucking birthday party tonight. Okay?

VOICEOVER: Organizers of Tuesday’s rally, the eighteenth of its kind, say protests against police brutality took place in more then 30 U.S. cities.

In New York, before marching to Harlem, activists gathered for an afternoon of know-your-rights workshops.

Time and time again, police brutalize and kill people and continue to walk away. So that creates a climate where brutality is okay and it’s accepted and it’s covered up.

CARL DIX, FOUNDER, OCTOBER 22ND COALITION: Jobs have been sucked out of the inner cities across the country, moved halfway around the world, where these capitalist imperialists can find workers they can pay much less and work in much more dangerous conditions. The educational system in the inner cities is wrecked. And that leaves tens of millions of inner city youth facing no future under this system. And the response of the authorities has been a program of control and suppression.

VOICEOVER: A 2012 study by the Malcolm X Grassroots Movement found that a person of color is killed by the police, a vigilante, or a security worker every 36 hours. Activists hope that mounting community pressure coupled with a nationwide movement against police brutality will bring justice for those who have been slain and ensure no more lives are stolen by law enforcement.