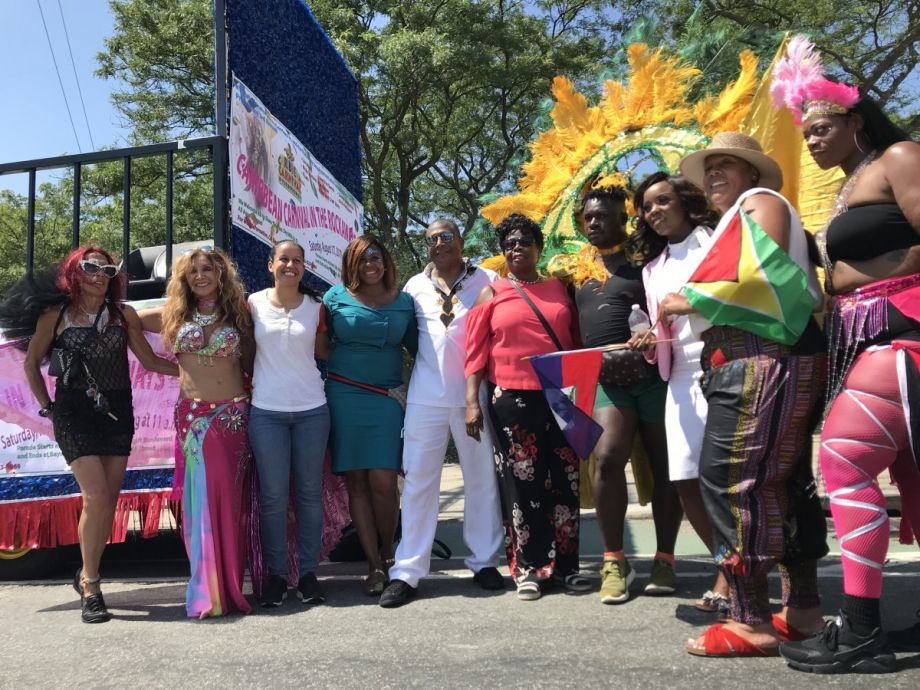 It’s a sunny August Saturday in Far Rockaway, and New York State Senator James Sanders Jr. could hardly be more in his element. He’s riding high, not only on his parade float leading the 3rd Annual Carnival in the Rockaways, but also in his relatively new position as chair of the NY State Senate Committee on Banks.

Both of those positions will be crucial for Sanders as he prepares to take on Wall Street in the 2020 state legislative session.

People come out as the parade comes by to sit on stoops, porches, stand out in front of stores, and along sidewalks. Many join the parade itself, which seems to get bigger and bigger as it moves through the neighborhood, up the main drag along Beach 20th Street, then a few blocks up Mott Avenue and hanging a left down Beach Channel Drive to the final destination and festival at Bayswater Park.

After some lunch and standard hob-nobbing in the VIP section of the festival, Sanders leaves his staff behind and takes me on a leisurely walk around the festival, checking-in on vendors and the crowd. Everybody seems happy to see him and say hello.

“This is why I can pursue a progressive agenda,” Sanders tells me. “These voters. There’s an African saying, ‘When a tree has strong roots, it need not fear the wind.’ And our roots are so strong, if the one percent wants to get mad at us, they have that right. They can spend as much money as they wish. Just look around, is it going to do anything for them? Help yourself, knock yourself out. We are here to serve these people.”

The state senator has also put his float at the front of the parade to take on Wall Street, and he’s hoping many will come join him along the way. Last session, he introduced S5565, a bill that would make it easier for cities and counties in New York State to create their own public banks, which would hold municipal and county deposits and leverage those dollars to serve local borrowers and neighborhoods currently neglected by big banks. He hopes to pass the bill in the 2020 session.

“I ran across this idea probably about seven to ten years ago and I understood it then,” Sanders says. “I’m grateful and blessed to be at a place now where we can do something about it.”

California organizers successfully overcame Wall Street opposition to win similar legislation in their state last year. Like them, Sanders looks to the hundred year-old Bank of North Dakota as a model for how a public bank would work. Under his legislation, city- or county-owned public banks would be prohibited from competing with the private sector. Instead, cities or counties would deposit tax dollars and other revenues into a local public bank, which would work primarily as a banker’s bank, partnering with community banks, credit unions and loan funds to leverage public deposits in various ways designed to support local businesses and other financing needs like affordable housing.

Participation loans help smaller lenders seem bigger than they actually are by sharing some of the risk on each loan without losing their local client to a larger lender. Since all the payments and paperwork go through the local lender, most businesses and farmers who get a loan from their local bank in North Dakota don’t even realize the Bank of North Dakota helped finance that loan — and that’s by design, to ensure that local lenders stay in the forefront.

In 2018, the Bank of North Dakota made 491 commercial loans totaling $971 million and 402 agricultural loans totaling $182 million. Nearly all of those dollars were participation loans originated by local financial institutions across the state.

Sanders’ bill envisions a public bank supporting local lenders that will serve constituents as a banker’s bank. It’s a vision shared by the Public Bank NYC Coalition, which launched in June 2018.

“North Dakota and New York couldn’t be more different in terms of economies, but it goes to show a lot of people credit the Bank of North Dakota for helping little banks and credit unions flourish,” says Andy Morrison, campaigns director at the New Economy Project, which is part of the Public Bank NYC Coalition steering committee.

Put another way, there are 75 banking institutions in the state of North Dakota, but there are only around 50 North Dakota cities with a population of at least 1,000. By acting as a banker’s bank through participation loans and other activities, the Bank of North Dakota helps those banks seem larger than they actually are.

“We’re hoping to learn from what they’re doing in North Dakota and put a New York twist on it,” Morrison says.

Sanders, who grew up in Far Rockaway, couldn’t have grown up in a more different place than North Dakota, which is 86 percent white and mostly rural. Far Rockaway is two-thirds black or Latinx — though it wasn’t always that way.

“I was born in the Rockaways,” Sanders says — in 1957 to be exact. “I remember the Rockaways doing well, when it was an integrated community, well-funded, and I saw it become isolated and just people of color, and I saw problems arise. When the white flight happened you saw neighborhoods fell off.”

As a state legislator and city council member before that, Sanders was already known for his work supporting minority- and woman-owned businesses to gain a larger share of city and state procurement dollars. He envisions that a local public bank would build on that work, partnering with local lenders to finance more minority- and woman-owned businesses.

“One of the reasons people are having trouble building businesses, especially for minorities, is that we don’t have the capital,” Sanders says. “We need ways of building our businesses. [Public banking] seems to be a way of financing them.”

Other than the Bank of North Dakota, public banks have had a rough track record. The California State Treasurer’s office commissioned a 2018 study noting 29 public banks were chartered and operated between 1917 and 2017 — and most have ceased to exist either by regulatory order, financial failure, or the state or municipality closing the public bank.

Still, the Bank of North Dakota has had 15 consecutive years of record profits, earning $159 million in 2018 — a year in which it also paid its billionth dollar back into the general fund of the state of North Dakota.

“I expect that those who have, want to keep, and I don’t take it personal,” Sanders says of public banking opponents. “They’ve had it forever. Why would they share?”

Morrison says the coalition will be taking lessons learned from the 2019 rent regulation battle, which resulted in a massive victory for tenants through a statewide coalition. Many of the tenant groups and organizers from those circles are also part of the public banking coalition.

“A lot of the housing groups statewide see public banking as one of the things we need to embrace to further the goals of the homes guarantee and community land trusts and other non-speculative housing models,” Morrison says.

Morrison says the Public Bank NYC Coalition is planning to rally groups in support of public banking legislation, but only after making some additional tweaks to Sanders’ bill — for example, thinking ahead to the hefty startup costs of chartering any kind of bank, the coalition wants public banks in New York to have the ability to raise capital from outside investors without having to give up any control to outside investors.