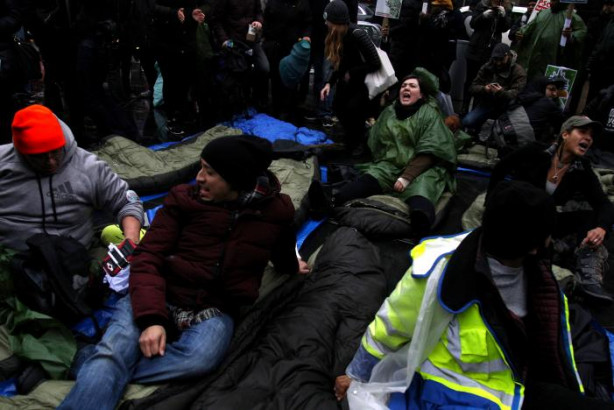 Above Photo: Demonstrators chant while in their sleeping bags outside of Goldman Sach’s Lower Manhattan headquarters during a protest against the Wall Street bank’s ties to the incoming administration of U.S. President-Elect Donald Trump in New York, U.S., January 17,2017. REUTERS/Bria Webb

Dozens of protesters gathered outside of Goldman Sachs Group Inc headquarters on Tuesday to rally against President-elect Donald Trump’s picking several former executives of the Wall Street bank for top jobs in his administration.

Some of the 50 or so protesters wore swamp-monster masks in reference to Trump’s pledge to “drain the swamp” that he said Washington has become and get rid of special interests. About 20 of them brought sleeping bags, intending to camp outside 200 West Street until Trump’s inauguration on Friday.

Goldman Sachs security guards sent employees and guests to entrances on the north side of the building on the rainy evening as protesters unrolled green sleeping bags on the southwest corner.

She declined to comment on the protesters’ objections to Trump’s nominations of ex-Goldman employees including Steve Mnuchin, Trump’s pick to lead the U.S. Treasury Department. Others include Gary Cohn, who had been chief operating officer before becoming Trump’s economic adviser, and Dina Powell, who left her position as Goldman’s head of philanthropic investing to do the same.

Goldman Sachs had long been viewed as Wall Street’s most prestigious and profitable bank with so many executives leaving for high-profile government positions it earned the nickname “Government Sachs.” But in the aftermath of the 2008 financial crisis, Goldman instead found itself blamed by politicians and activists for profiting from the implosion of the mortgage market.

In response, the bank embarked on a public relations campaign to clean up its image and launched initiatives to help small businesses, prisoners and female entrepreneurs. But the string of Trump appointments has renewed some of public contempt it received during the Occupy Wall Street protests in 2011. (reut.rs/pJKyQX)

Nelini Stamp, 29, an organizer with a group called Working Families, said she also participated in that movement and Trump’s appointments drove her to come back.

“We’re here to make sure that people realize that Goldman Sachs is running our government,” Stamp said.

Holding a sign with the image of a swamp monster biting down on a gold bar emblazoned with #GovernmentSachs and “foreclosures,” Ethan Cantor, 25, said it was his first time at a protest.

The New Jersey native said Trump’s embrace of Goldman Sachs contradicted criticism the president-elect had leveled against Democratic opponent Hillary Clinton for speaking fees she received from the bank.

“He used Goldman as a dig against Hillary,” said Cantor, who said he reluctantly voted for Democratic candidates in the last election. “One good thing about (Trump’s) campaign was that it was populist. Now he’s lying to his own voters.”