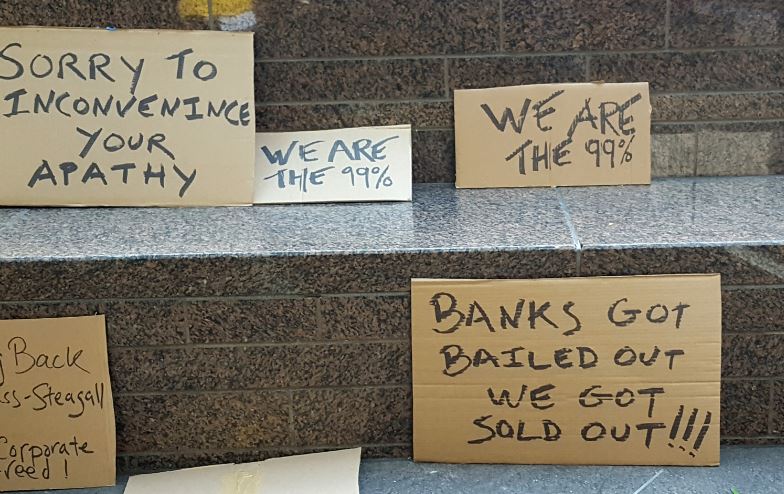 Above: Signs appear in Zuccotti Park on Sept. 17, 2016, on the fifth anniversary of Occupy Wall Street. Photo by Corinne Segal.

Becky Wartell was living in Portland, Maine and applying for jobs when she heard the first rumblings of Occupy Wall Street.

Her story mirrors many others who gathered in Zuccotti Park in lower Manhattan on Saturday, exactly five years after the protests began, reuniting with old friends and describing how a small encampment spread to cities across the country.

In 2011, after staying in Zuccotti Park for several days, Wartell expanded her trip to a week — and for the next five months, continued to commute back and forth from Maine, even when she took a job in Portland. “In the moment, I was like, ‘I have to be there. This is big. This is important,’” she said.

Zuccotti Park became a space where activists from a range of different causes could converge to share ideas, as most of them claimed the common cause of protesting corruption on Wall Street. Critics asked why Occupy could not settle on a list of explicit demands and actionable goals for the movement — protesters answered that the purpose of the movement was not to make demands, but empower a range of communities.

The encampment ended in November 2011, when police cleared the camp and arrested more than 200 people. But by that time, offshoots had appeared in dozens of other cities, including Boston, Oakland, Portland, Minneapolis, Washington, D.C., Toronto, London and elsewhere.

We asked people who gathered there today what legacy Occupy Wall Street left on social issues, politics and activism. Here’s what they said.