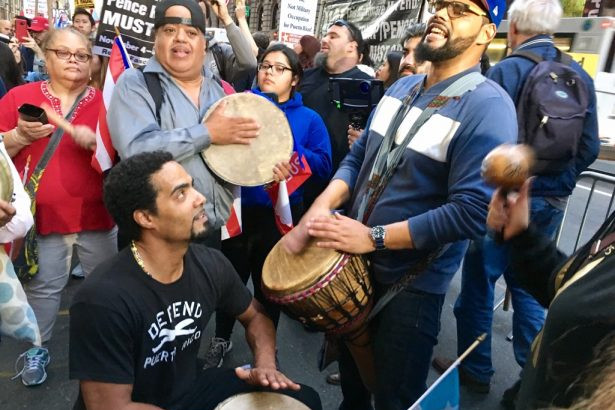 Above Photo: Protesters chanted and played bomba drums outside of Trump Tower on Tuesday. (WNV/Ashoka Jegroo)

A crowd of about a hundred protesters picketed outside of Trump Tower in New York City on Tuesday in support of hurricane-ravaged Puerto Rico, while also protesting colonialism and the Trump administration’s response to Hurricane Maria. The protest occurred on the same day as President Trump’s first trip to Puerto Rico since Hurricane Maria destroyed much of the island two weeks ago.

“We’re here denouncing not only Trump’s visit to the island. We’re denouncing what’s going on right now and how politicians from both parties are using Puerto Rico as a ping pong ball. They are not helping my country,” said Norma Perez of Call to Action On Puerto Rico. “Also we want to denounce the payment of [Puerto Rico’s] debt. This is not the time to pay any debt. Just take the debt with you, allow us to be free, and we can move on and be an independent country without the colonialism, without everything they are imposing on us in Puerto Rico.”

The protesters, many of whom were Puerto Ricans from the island or the diaspora, demanded an end to the Jones Act, a law imposed by the United States in 1920 that only allows U.S. ships to deliver goods to the island. Protesters were also calling for an end to PROMESA, a 2016 U.S.-imposed law that put a 7-member fiscal control board(colloquially known as “la Junta”) in charge of resolving the island’s more than $70 billion government debt crisis. They started picketing at around 5 p.m. and — with the sound of bomba drums ringing in the New York air — chanted anti-fascist, anti-colonial and pro-Puerto Rican independence slogans.

“We need to denounce colonialism and the imperialism of the United States,” Perez said. “We have PROMESA. We have all this devastation from this huge hurricane. It’s been more than 100 years of being a colony of the United States, and they are not treating us as citizens. So it’s not only about Maria.”

Since invading Puerto Rico in 1898, the U.S. government has facilitated the exploitation of the island for both its own interests and the interests of U.S. corporations, essentially pushing Puerto Rico into its current dire economic situation. Yet, U.S. politicians and businesses are blaming Puerto Rico for the crisis and have installed a colonial control board to oversee its finances.

President Trump’s comments and actions during his visit to the island on Tuesday only further illustrated this colonial relationship. With 95 percent of Puerto Rico lacking electricity and Oxfam harshly criticizing the administration’s response to the hurricane, Trump still managed to praise himself and blame Puerto Rico. “I think we’ve done just as good in Puerto Rico [as the government did in response to Katrina], and it’s actually a much tougher situation,” he told reporters outside the White House before his trip. “But now the roads are clear, communications starting to come back.”

But even though the roads were clear, Trump claimed that Puerto Rico’s truck drivers were not doing their part. “We need their truck drivers to start driving trucks,” he told the New York Times. “On a local level, they have to give us more help.” He also contrasted Hurricane Maria’s devastation with “a real catastrophe like Katrina,” claiming that, because only 16 people had died, “everybody watching can really be very proud of what’s taken place in Puerto Rico.” These comments echoed Trump’s tweets on Sept. 30 claiming that Puerto Ricans “want everything to be done for them” while federal workers were “now on Island doing a fantastic job.” In a series of tweets on Sept. 25, Trump also made sure to remind Puerto Rico of the “billions of dollars … owed to Wall Street and the banks which, sadly, must be dealt with.”

For the protesters outside Trump Tower on Tuesday, Trump’s comments continued a long tradition of colonizers disrespecting the colonized.

“What we did here today is send a very clear message to the Trump administration and to the politicians in New York City that the people in New York — who want to see an end to colonization and support independence — will not be disrespected and will not sit by while our people are being disrespected by this president,” said Frank Velgara of the Pro-Libertad Freedom Campaign. “His statements and his behavior are reminiscent, historically, of the prime ministers in India — when Britain colonized India — or the French in Algiers.”

After speakers denounced both major political parties, New York City Council Speaker Melissa Mark-Viverito, a well-known Puerto Rican Democrat, showed up at the protest but was not well received. Her support for the rezoning and gentrification of Spanish Harlem and the Bronx, as well as her support in 2015 for adding 1,297 new cops to the NYPD, made her persona non grata at the demo. At one point, protesters surrounded her chanting “No rezoning!” and “El Barrio no se vende!” Although protesters called for her to leave, she stayed at the protest with her bodyguard until it ended at around 8 p.m.

“I don’t know who advised her to come here because it’s not that kind of rally,” Velgara said. “But you see Melissa is used to coming to rallies of progressive groups and non-profits and the minute she shows up, she wants the mic. And we were not going to give her the mic. She played a key role in freeing [Puerto Rican political prisoner Oscar Lopez Rivera] along with [Congressman Luis] Gutiérrez. That’s fine, but they’re kowtowing to Trump, and we can’t support that.”